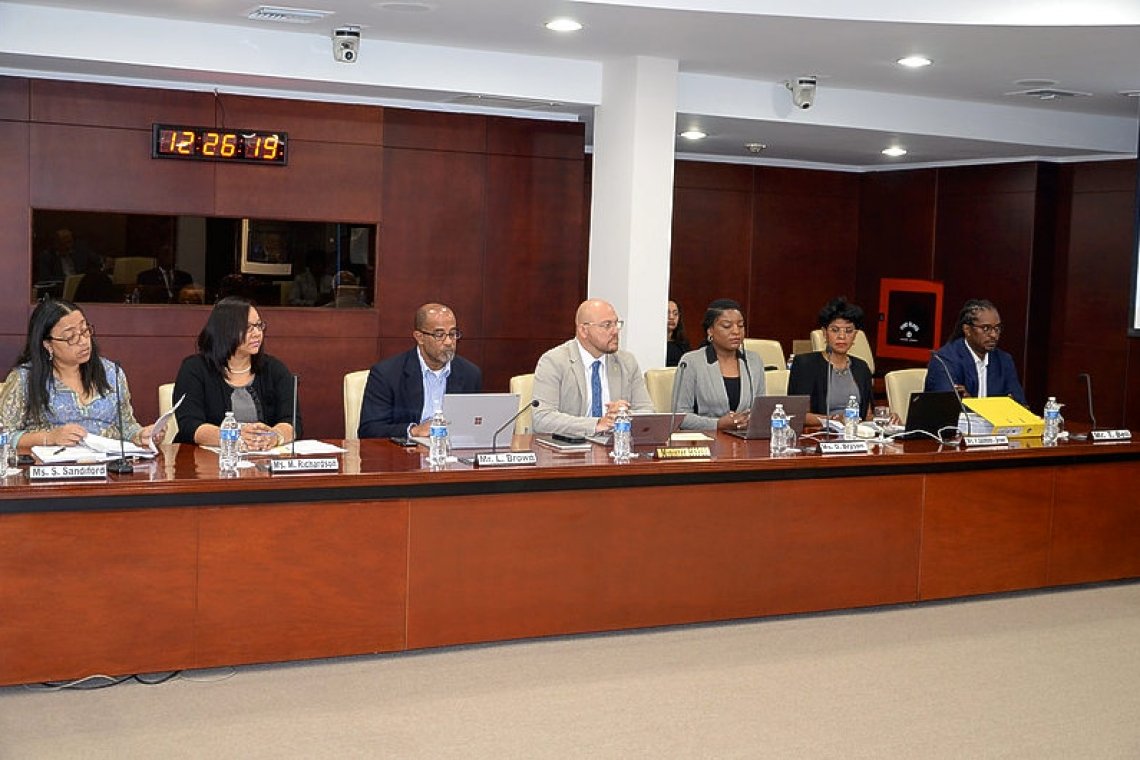 Representatives of SMHDF, VROMI and Versant Accounting and Consultancy during Wednesday’s Parliament meeting on the status of SMHDF’s affairs.

PHILIPSBURG–“Our time is running out” was the theme of St. Maarten Housing Development Foundation’s (SMHDF’s) presentation to Parliament on Wednesday, highlighting the dire straits the non-governmental organisation (NGO) is in. The foundation said if the constraints it faces are not corrected soon, it might end in bankruptcy.

The meeting was a continuation of the urgent public plenary session of January 23. The meeting’s agenda point was the status of repairs of the public homes and facilities managed by SMHDF and an account of its status of affairs. The meeting was requested by National Alliance (NA) Members of Parliament (MPs) Anna Richardson and Solange Ludmilla Duncan, and independent MP Rolando Brison.

Salomons gave SMHDF’s presentation to Parliament. She said the foundation faces market-related, financial, technical and governmental challenges. According to her, the demand for safe, affordable housing is increasing while the foundation lacks the capacity to maintain its homes in a manner acceptable to tenants.

Salomons said the foundation has suffered huge deficits since it was founded in 1996. She displayed a graphic to Members of Parliament (MPs) which showed the foundation being at least more than NAf. 800,000 in the red during its first seven years in operation.

In fact, the foundation has only broken even in four of its more than 20 years of existence, according to Salomons.

The government does not grant SMHDF a subsidy to fund its operations. Government instead is supposed to pay the foundation approximately NAf. 300,000 per year to subsidise rent for 318 of the 494 homes in the Belvedere housing project. However, these payments have been irregular and are “not enough to satisfy the total financing needs of these homes,” said Salomons.

Only when these payments have been made to the foundation has it received more money than it spent. “Money should not be paid if and when government feels like it,” said Salomons.

According to Salomons, the foundation currently pays 44 per cent of its income to service its existing loans. She said this is high compared to other housing corporations in the Dutch kingdom. Additionally, about 30 per cent of its income goes to paying insurance premiums. All this means about 75 per cent of money raised by SMHDF is immediately spent, leaving little that can be spent on reserve finances or repairs.

Soft loans and grants are needed for repairs, but these are unavailable in the current financial climate, said Salomons.

Additionally, the homes in Belvedere were completed with hidden defects that total approximately US $17 million, she said. They were also built with European-sourced materials. This means replacement materials must come from Europe instead of North America, which adds to shipping cost.

“Such a basis does not offer opportunities for building up reserves towards self-sustainability in social housing and optimum repair and maintenance.

“In addition to our poor financial situation, [it – Ed.] does not offer healthy possibilities to maintain the homes in an optimum manner, as well as attract long-term financing for the development of new projects in social housing. Consequently, the execution of new projects is suffering delays and tenants’ patience is running out,” said Salomons.