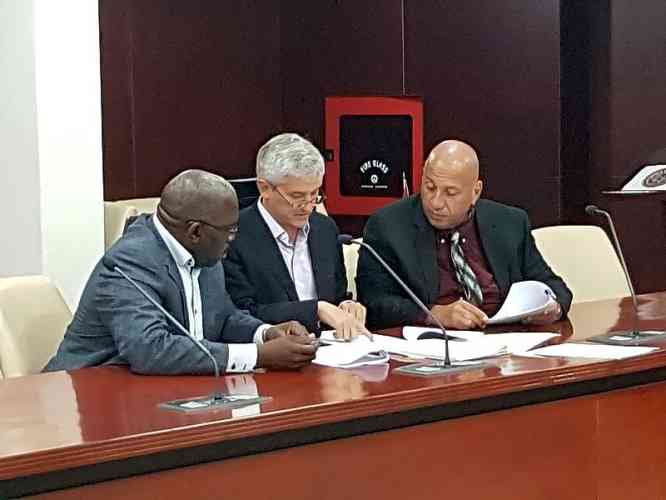 PHILIPSBURG–Work in the interest of the people and work together were the parting nuggets of wisdom outgoing Members of Parliament (MPs) had for new and re-elected MPs on Friday.

The plenary session of the legislature was primarily focused on the examination and acceptance of the credentials of the MPs who will form the country’s fourth Parliament in under eight years, come Easter Monday, April 2. The credentials were reviewed by a committee comprised re-elected MP Theo Heyliger (United People’s party) and outgoing MPs Rodolphe Samuel (National Alliance) and Silvio Matser (United St. Maarten Party). All documents were found to be in order and Governor Eugene Holiday will be informed of this for the swearing-in ceremony to take place.

The dissolution of the current Parliament and the installation of the incoming one is not affected by the non-formation of a governing coalition.

Outgoing MP George Pantophlet (NA) called on all incoming MPs to continue the cordial working relationships that exist among parties. “We had our differences, we could always discuss things on a friendly basis … I never want to see this change.”
Pantophlet, who fell short of claiming one of his party’s five seats, said he wants Parliament to complete the law changes to tackle the abuse of short-term labour contracts and being about true consumer protection.

Samuel thanked all voters and supporters of NA and urged those MPs returning to Parliament and those coming in for the first time to put the people of the country first. He also plans to continue to look out for the St. Maarten people.

Heyliger said it has been a “privilege and honour” to have worked with the other 14 MPs in the past 18 months. Despite parties and MPs having different philosophies and opinions “we all had one common goal that is to push St. Maarten further.” Anyone who does not work in the interest of the country or to the common goal of bettering her standing, is “an enemy of the state.”

Friday’s meeting was also the last one in which UP was be represented, as the party merged with the Democratic Party to form the United Democrats, the party that captured the most seats in the February 26 snap elections. Heyliger thanked those who have served and supported with UP in the past eight years.

Outgoing MP Perry Geerlings (DP) described himself as “a hard worker” who “felt I belonged here” in Parliament. “Unfortunately, I cannot continue … but one has to move on.” He missed retaining his seat by some five votes. However, if current Public Health Minister Emil Lee opts to stay in his post and not take up his parliament seat, Geerlings may well be in the legislature again. Geerlings called on the new Parliament “to get professional” and to start to debate, rather than just have discussions.

Many, outgoing MP Tamara Leonard (UP) said, did not like her “rough-around-the- edges approach” to matters of concern, but persevered in the interest of the country. She stated her gratefulness for the support received at the polls, and it puts her “in line” to return to Parliament depending on the governing coalition composition.

Serving the country and her people means “putting comforts aside,” said outgoing MP Claret Connor (UP). This was a sacrifice he said he willingly made and was glad for it. He leaves the legislative with “experiences he will remember for a lifetime.”

Re-elected MP Franklin Meyers (UP) called for the criticism and “back-biting” in the Parliament and the political arena to cease. “It is time we say what we mean and mean what we say,” he said, adding the last time he checked “criticism was still cheap” but commitment and hard work were still stronger.
MPs are “tasked with providing better days for St. Maarten … and there is better to come” for the country, Meyers said.

In giving his farewell address, MP Hyacinth Richardson (NA) questioned where was the 550 million euros in promised recovery aid from the Dutch Government. He said it was not clear if the money ever arrived in the country and if anyone was assisted in their recovery from Hurricane Irma.

Re-elected MP Chanel Brownbill (independent) said it was a tough road, but he is happy to continue to serve his country for a second term in Parliament. He thanked his family and team for their unwavering support.

Re-elected MP Sarah Wescot-Williams also expressed her sentiment about Parliament’s pivotal role in the country and called on all to work together to better the nation in the post-Irma rebuilding and recovery phase.