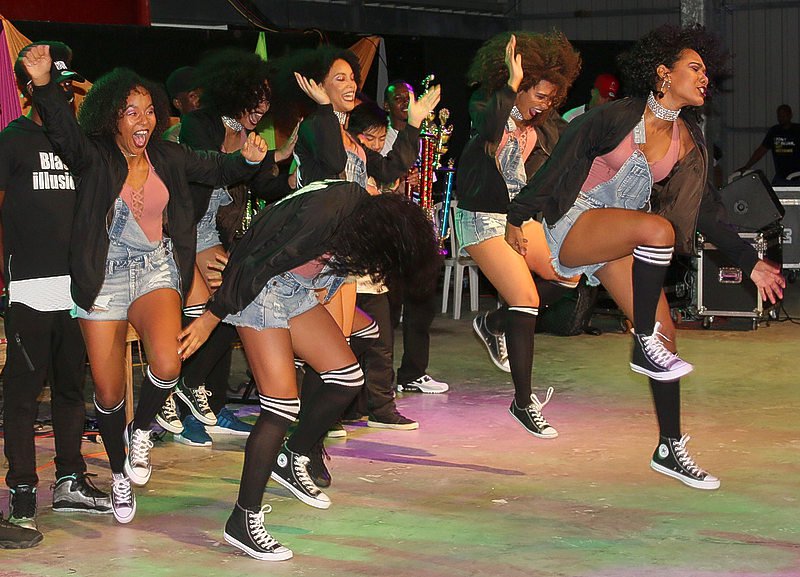 PHILIPSBURG–More than 1,600 people, mostly teenagers, attended Teen Times Talent Showdown 2016 at the St. Maarten Festival Village on Saturday night to see two reigning champions repeat and “three-peat” and to witness the emergence of a terrific young vocalist and individual dancer as new champions.
The 14th annual event, St. Maarten’s longest-running performing arts competition, moved out of the hotel properties in which it had been held the last few years and more than doubled its attendance.

“We knew we had outgrown centres that could only seat 600, but the cost of an outdoor event kept us grounded. Because of the high demand, we took it outside this year and the results were spectacular. We are so happy with the support our young performers received from the public and their peers,” Teen Times Coordinator Roosje Richardson-Rommy said.
The crowd saw dance champions Otmar’s Angels win their third consecutive title to become only the second dance group to “three-peat” in Talent Showdown history. The group blended their dance with modern, jazz, hip-hop and soca routines and sealed their win by incorporating salt-pickers of St. Maarten’s past and a Ponum chant. The decision was never in doubt after that.
The toughest and closest category of the night was the singing category which Francia Adamus won by a margin of just four points. Known for a beautiful voice as part of ensembles, Francia was competing for the very first time as a soloist. According to one judge, she delivered her rendition of “I dream a dream” from Les Miserables flawlessly and captured the crowd from start to finish. A visibly emotional Francia could not believe her name was called as the winner.
The rap category also saw defending champions Tommy Lee and Rudy successfully retain their championship with a blend of hip-hop and soca, while the individual dance category crowned a new winner in the person of Tristan Defoe.
The night also featured several guest performers, including local headliners Rumer, Natisha Hanson and her band, and St. Maarten sensation Tamillia. The performance at Talent Showdown was Tamillia’s first after The Voice Kids in France. She surprised the crowd on Saturday night by performing with reigning Power Soca Monarch King Vers and even had the entire crowd do the Mannequin Challenge.
“To say that the night was a success would be an understatement. All participants in the show did a terrific job. They worked so hard over the past few months and it showed. We are very proud of them, their parents and friends who came out to support them. Next year we will celebrate 15 years Talent Showdown and we are already planning a spectacular event,” Rommy-Richardson said.
She thanked CC1 for its support, The Daily Herald for standing by “very demanding teens,” Van Dorp, Genesis Music Group, Sheriff Security Services, Domino’s Pizza, Mario Gumbs and crew, Fabiana Arnell and “Stichting Overheids Gebouwen,” the Police Force of St. Maarten, DJ Maestro, judges Duncan Van Heyningen, Melisa Boasman, Lysanne Charles and Morenika Charles-Arrindell, and “last, but not least, the hardworking volunteer members of Teen Times.”