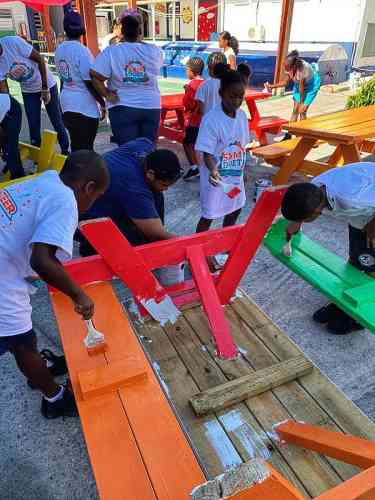 PHILIPSBURG–The fifth anniversary of SXM DOET was a huge success, according to the foundation on Sunday, which said more than 2,000 volunteers had rolled up their sleeves to be part of positive change and lend a helping hand at more than 100 different projects over the course of two days.

Eighty-one local organisations hosted a number of projects on Friday and Saturday, and this year saw projects that were higher than ever before in quality and impact, with many organisations participating for the first time.

Others were more beautification-type projects such as gardening, painting murals, clean-up efforts, creating signage, painting schools and day care centres. Additionally, there were many social projects such as baking cookies, taking youngsters for a fun day out, movies in the park, assisting with food drives, island tours, and sports and spa days with the elderly. There were also more culturally-driven projects such as creating little libraries and restoring an historical site, amongst others.

Most of the projects received a small stipend to obtain the materials for the plans put in place, but they could not have been executed without the generosity of hardworking volunteers and non-governmental organisations (NGOs) who were up to the task to make their ideas reality.

“We are so very thankful to all the volunteers that participated this year. The NGOs have all been working so hard to get back up on their feet post-[Hurricane – Ed.] Irma and keep contributing day in and day out to the community, no matter how hard they have it in their personal lives. They really are the drivers of our community. Their dedication, spirit and drive is truly impressive.

“It is also absolutely heart-warming to see this initiative grow each year, not just in size, but mainly in impact and quality,” stated Melanie Choisy, Fleur Hermanides and Laura Bijnsdorp of the SXM DOET Project Management Team on Sunday.

“The welcome addition of the project coaches over the recent years has also ensured success. We are very grateful to have them all on board this year again. They have really made SXM DOET what it is today, and it is always a pleasure to work with such motivated and caring persons who want to give back in such a profound manner.”

SXM DOET is part of a Kingdom-wide initiative, whereby, this year, a total of more than 10,000 projects were hosted with more than 400,000 volunteers all giving back to their communities on the same two days. The King and Queen join in, as well as Princess Beatrix, who all physically contribute at a project every single year in the Netherlands as patrons of the funding agency which initiated it all – the Oranje Fonds.

Locally, many persons, such as representatives of government and/or parliament, businesses, schools, clubs and groups joined in, with many requesting to contribute to the event in multiple ways. Some companies partnered with the SXM DOET team to provide discounts and donations to all participants, and others donated their time and assistance by adopting a project for the weekend.

To those entities, the team gave a very special “thank you,” as without such selflessness, SXM DOET would not be what it is today.

Be The Change Foundation, the executor and organiser of SXM DOET, also thanked the Oranje Fonds for having brought the initiative to St. Maarten just five years ago and for funding the effort locally and throughout the rest of the Dutch Kingdom.

This year a welcome contribution from SXM Festival made it possible for this year’s contribution by the NGOs to have been even greater – a much-appreciated collaboration which will hopefully grow in the future.

This year US $68,065 was divided over 98 projects (of the 112 total) in funding, all of which submitted requests to SXM DOET for their projects, of which $10,000 was made available by the SXM Festival donation. Many more in-kind donations and discounts were provided as well, thanks to the mentioned partnerships mentioned.

Thanks to the collaboration of funders, government departments, businesses, foundations and especially the volunteers, a huge positive impact was made on St. Maarten.

For more information on SXM DOET or to learn how to contribute in any way contact the SXM DOET Project Management Team Melanie Choisy, Fleur Hermanides or Laura Bijnsdorp at