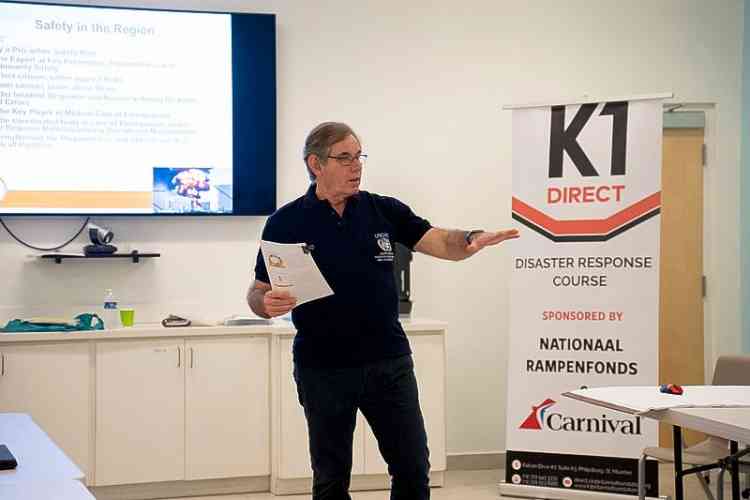 Jacob “Sjaak” Seen, Multidisciplinary Operational Team Leader of the United Nations Disaster Assessment and Coordination (UNDAC) team, during one of his sessions with participants.

Hurricane Irma devastated the island of St. Maarten in 2017 and K1 Britannia Foundation played a key role in first response, mass distribution and other forms of relief and aid. Seen came to the island via UNDAC to support the government of St. Maarten with disaster coordination during that time and formed a bond with K1.

This bond developed over time, which enabled him to come back and donate his time to share his expertise with K1 DIRECT and other local organisations that play key roles in disaster relief.

The trainings took place at American University of the Caribbean (AUC) School of Medicine and the Government Administration Building over the course of 12 days at no cost to the foundation. Seen provided essential trainings for the participants on the topics of Principles of Humanitarian Aid, Humanitarian Mission Cycle, Search and Rescue, Crisis Management, Information Management, Reception and Departure Centres and Emergency Logistics.

These elements were all broken down into step-by-step procedures of a complete mission cycle pertinent to an affected population.

Participants with their certificate of completion.

K1 DIRECT Programme Manager Iris Hakkens said, “Sjaak is doing more than just lecturing, he is a mentor to K1 DIRECT. He is volunteering his time and donating his services not only to prepare our team, but also to advise us as management. When we’re not in sessions Sjaak is reviewing our standard operating procedures (SOPs), our memorandums of understanding (MOUs), etc. This period with him here has helped us make great strides in the further development of K1 DIRECT.”

Ministry of Public Health, Social Development and Labour VSA Financial Controller/ESF7 Office Coordinator Roxanne Howell stated, “The ministry welcomes the initiative of K1, one of the partners of ESF7, as it addresses important issues and will strengthen our collaboration efforts and ensures that together we can become more resilient.”

K1 DIRECT has committed to specific predetermined roles under ESF7 within the disaster management structure of the Government of St. Maarten. Seen has an extensive background in global humanitarian aid. Prior to his position at UNDAC he worked with Urban Search and Rescue (USAR) in the Netherlands, among others.

His background has allowed him to tie real-world experience into methodology while stressing the importance of group work. The trainings have allowed the participants to gain a well-rounded view of disaster preparation and coordination.

Joanna Rijnboutt of WIEMS elaborated, “I learned a lot about the importance of coordination, cooperation and organisation in disaster relief and humanitarian aid. Most importantly, we received the tools on how that can be achieved. The classes were interactive, and gave on-point information – very grateful to K1 and Mr. Sjaak Seen.”

Dutch Caribbean Coast Guard Officer Alan Schet added, “As service/law enforcement personnel, we understand the importance of coordination, logistics and management. This course covered a lot of topics that gave us a different perspective of how working together can be implemented effectively and efficiently. Therefore, we would like to thank K1 for hosting this course and Mr. Jacob Seen for educating us with the above-mentioned topics.”

Seen also stated, “The information I shared is a good start to build resilience, but disaster crisis preparation is a continuous process of working hard to be adequately equipped. It’s important to be vigilant at all times, and it’s necessary to especially be prepared in the areas of your reception and departure centres, such as the airport.”

The next step for K1 DIRECT is to deepen knowledge in the areas Seen has highlighted throughout the training, especially in fields that are relevant to K1’s predetermined roles with ESF7. Co-founder Priya Thirumur said, “Since we have set up K1 DIRECT, we have put an intense emphasis on trainings and preparations – using Irma as a reference point of what would be needed in terms of trained manpower, supplies and procedures to be effective in a disaster of that magnitude in the future.

“K1 DIRECT was set up in response to the needs K1 Britannia Foundation faced on the island after Irma. All emergency organisations who have gone through Irma have a great reference tool to be able to be effectively prepared going forward. Preparation is key, and cannot be over-emphasised.”

K1 DIRECT’s founding sponsors, which help to make training courses such as this possible, are Carnival Cruise Line and the Dutch Disaster Fund. K1 DIRECT thanked Shieka’s Bistro, Freegan Food Café, PJIA, Simpson Bay Suites, AUC, Government of St. Maarten and especially Seen for all efforts and contributions made in making this training