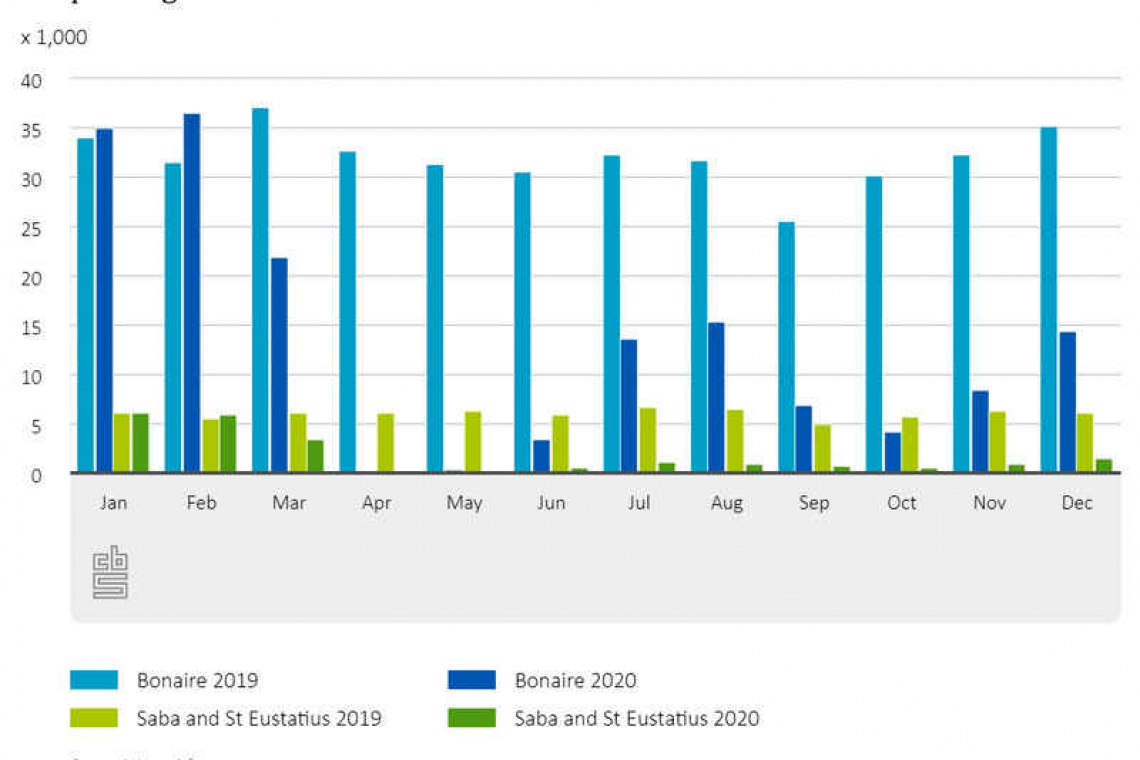 SABA/ST. EUSTATIUS–Nearly 183,000 air passengers travelled to and from the airports in the Caribbean Netherlands in 2020. This is sixty per cent fewer than in 2019, when there were more than 457,000 travellers.

The total number of flights to and from Bonaire, St. Eustatius and Saba was down by more than 50 per cent year-on-year, at 12,600. Almost 88 per cent of the air passengers to and from the Caribbean Netherlands travelled via the airport of Bonaire, it appeared from new figures released by the Central Bureau for Statistics (CBS).

Passenger traffic to and from Bonaire was 58.3 per cent down last year compared with 2019. In Statia and Saba, the number of air passengers declined by 68.7 and 70.5 per cent, respectively.

The airports of Bonaire, Statia and Saba counted a total of 4,300 aircraft movements during the first two months of 2020, which was a year-on-year increase of 3.9 per cent. This was mainly due to a higher number of flights to and from Bonaire, up from 2,500 to 2,700.

The measures implemented in March 2020 to combat the COVID-19 crisis were clearly visible in the subsequent months. Total air traffic in 2020 stood at 49.2 per cent of the 2019 number.

Of the three overseas Dutch airports, Flamingo Airport in Bonaire has the highest number of aircraft movements and passengers. The number of flights at this airport fell by 50.5 per cent last year, from 15,700 to 7,800. F.D. Roosevelt Airport in Statia and Juancho E. Yrausquin Airport in Saba recorded year-on-year declines of 53.5 and 47.4 per cent, respectively.

Bonaire, Statia and Saba closed their airspace for inbound passenger traffic from Europe and high-risk countries elsewhere on March 14, 2020. In April and May last year, when there were only a limited number of repatriation flights, barely 1,000 passengers travelled to and from these three islands. In the same period in 2019, 76,300 travellers were counted, representing a 98.7-per-cent decrease, according to the CBS.

A limited number of tourists were admitted to Bonaire as of July 1, 2020, which led to a higher number of air passengers in July and August. Nevertheless, passenger numbers on this island were 58 and 51.3 per cent lower, respectively, relative to July and August 2019.

A total of 160,500 air passengers passed through the terminals of Bonaire’s Flamingo Airport in 2020, accounting for 87.8 per cent of all air passenger traffic to and from the Caribbean Netherlands that year. The airports of Statia and Saba handled 13,200 and 9,000 passengers, respectively.