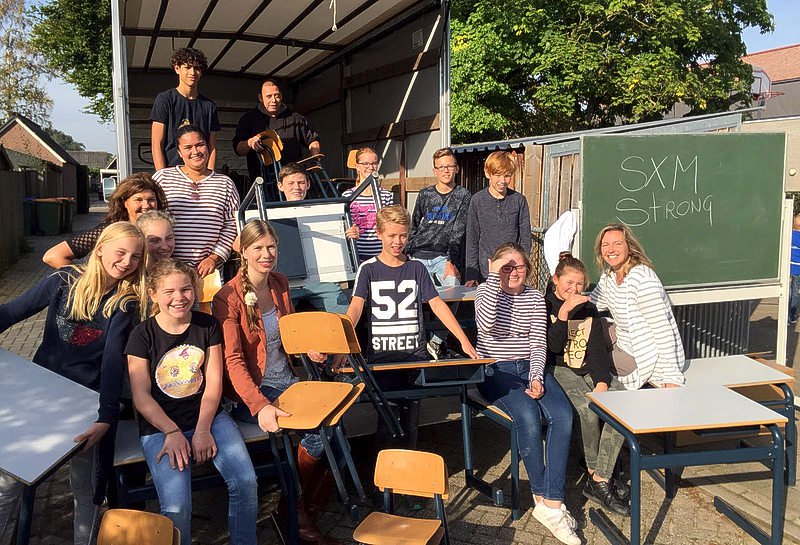 ROTTERDAM–The support for the voluntary relief organisation Make St. Maarten Great Again, run by St. Maarteners in the Netherlands, has been overwhelming. Containers with school furniture, beds and other house furniture, clothing and food are being loaded and are scheduled to depart from Rotterdam Monday, October 2.

When Patrick Marcelino and his team of volunteers started Make St. Maarten Great Again shortly after the devastating Hurricane Irma, he could not have anticipated that the initiative would muster so much support and especially donated goods. “It has been an enormous success. A lot of the credit goes to the super input of our volunteers,” said Jaap van den Heuvel of Make St. Maarten Great Again.
The Dutch people, including many of St. Maarten descent, collected clothing, shoes, toys, food, personal hygiene items and medication and dropped the stuff off at the some 50 collection points throughout the Netherlands. Organisations, like the Vindicat student association in Groningen, called on their members to donate, and schools asked children and their parents to help out.
The response was impressive. So overwhelming in fact that the Make St. Maarten Great Again organisation and its volunteers have had to move to a bigger location several times. The drop-off points all filled up and so did the warehouse in Rotterdam that was made available to the organisation.
A large donation came from Leen Bakker and Kwantum Hallen which donated a large number of (spare) guest beds and other house furniture. All donated goods are being loaded into containers this week, with the ship slated to leave for St. Maarten coming Monday and should arrive there in about nine days.
The transportation is the biggest cost factor in the operation. Make St. Maarten Great Again avidly had been searching for funding to cover these expenditures to get all the donated goods to St. Maarten. GLE transport company has been most helpful, but more funds are needed, said Van den Heuvel.
Marcelino hopes to go along with the ship that brings the containers to St. Maarten. Once there, he will assist in distributing the contents of the containers and assess in what ways Make St. Maarten Great Again can continue to help in the near future.
A beautiful initiative came from the Triangel School in Lunteren, its staff and pupils of this primary school. Teacher Noortje Pennings was the brain behind the idea to donate the school furniture to St. Maarten. She worked from 2014 to 2017 at the Sister Magda School in St. Maarten and had just returned to the Netherlands in July, together with her partner Jos Huese who worked at the Sister Regina School.
Teacher Noortje wanted to help St. Maarten children so they could return to school and asked the principal of the Triangel School for assistance. It was decided to donate 90 tables and chairs suitable for the younger primary education pupils. A few other school supplies, including a teacher’s desk, were donated as well. Teacher Noortje also organised a market with her class of which the proceeds go to St. Maarten.
“It was incredible, so much stuff. It completely filled up the truck,” said Van den Heuvel. He expressed profound thanks to the school. But also to the Evers family from Ederveen who sponsored the truck and truck driver Raymond Scipio from Ede who volunteered his services, driving to the school and to the warehouse in Rotterdam.
Make St. Maarten Great Again was born directly after the passage of Hurricane Irma. St. Maarten businessman Van den Heuvel said that when he spoke to construction worker Marcelino the latter said that he wanted to go directly to his island to assist.
“Aside from the fact that it is impossible to get into St. Maarten at this time, I told him it was a better idea to do something in the Netherlands to help his fellow St. Maarteners,” said Van den Heuvel. Businessman Marc van der Bilt joined and the three set to work to collect goods throughout the Netherlands.
With a team of some 30 persons, headed by Marcelino and coordinator Cerasela Somersall, goods were collected, sorted and checked at a large warehouse in Rotterdam. They have been working around the clock. Clothing, toilet paper, canned goods, water, toothpaste, soap and many other items are coming in. Van den Heuvel said that people exiting supermarkets came directly to them with items that they had just bought.
Make St. Maarten Great Again (www.makestmaartengreatagain.com) does not work with monetary donations. Donated money is going to the Red Cross where people have been referred to if they want to make a financial donation.
Another initiative started by St. Maarteners residing in the Netherlands is Rebuild St. Maarten of Cyriel Pfennings and John Sandiford who have been trying to raise as many funds as they can to secure assistance to their island on the long run.
Rebuild SXM also started right after the hurricane. “John and I came together and we said we have to do something,” Pfennings said. A foundation was set up. The strength of RebuildSXM? “We are from St. Maarten. We have a large network and we know exactly what is where.”
The foundation and its nine-member support team want to work on the longer term, assisting in the island’s reconstruction. “The Red Cross is doing fantastic work, but they are not there for the long run. We are,” said Pfennings. He said he had already received numerous calls from people, organisations and companies who want to help reconstruct homes.
There are many initiatives to help rebuild, but there isn’t a central platform to report and coordinate these. Pfennings said the foundation tries to fill the gap of the current absence of a central coordination point. “We have been collecting information. The reconstruction is a long-term affair and we want to play a facilitating role in that.”
The website
www.rebuildsxm.com so far has generated more than US $10,000 in donations. Pfennings promised that the foundation would work with full transparency. “We hope to offer a lot of help of which we will inform the people.”