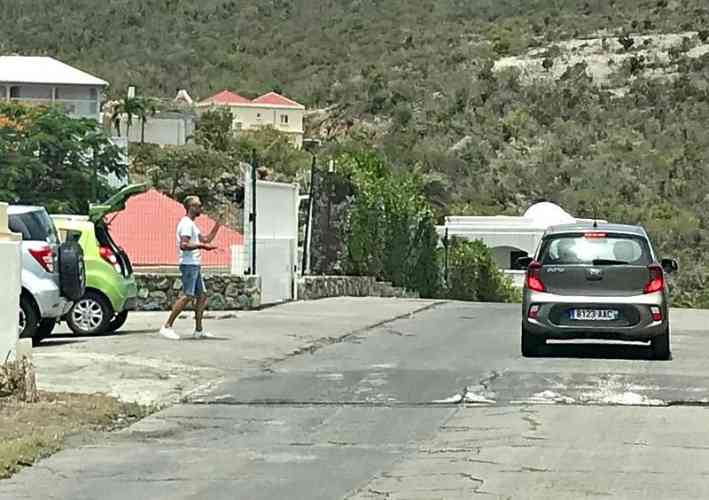 An OPC working in Oyster Pond.

MARIGOT–Residents of Oyster Pond and Avenue du Lagon have once again deplored the nuisance factor of Off Premises Consultants (OPCs) working in the Oyster Pond area and have written a complaint letter to Préfète Sylvie Feucher, Territorial Police and Gendarmerie.

“We would like to draw your attention once again to the ‘OPC sellers, time-share agents/time-share real estate salesmen,’ who have been operational again in Oyster Pond for several weeks,” the letter reads. “We had sent a letter on this subject to Préfète Anne Laubies on November 29, 2016, with a copy to the Territorial Police and the National Gendarmerie, as well as to the local press.

“These time-share sellers offer lottery tickets that are always ‘winners’ in order to attract their future customers to time-share hotels on the Dutch side. This practice is strictly prohibited by law, especially since they occupy the public and/or private domain without any prior authorization from the authorities.

“They ‘camp’ in a private car park, in front of the doors and entrances of private houses, and with their vehicles they occupy the parking spaces of tenants and owners of these residences and private houses. They continuously stop tourists and visitors passing by car (in both directions) on the Route Nationale/Avenue du Lagon, just before the Franco-Dutch border; but partly French at Oyster Pond.

“This results in traffic jams and incredible situations, which are dangerous for other drivers because they block traffic and residents must pass over the roadside in order to [get past the area – Ed.]

“Even if the houses opposite are all currently under reconstruction and that the noise made by these ‘non-licensed street vendors’ is not the main complaint, because there are also noise generated by the construction, they must absolutely not stay there because of the inconvenience they cause to traffic; then it will be all the more difficult to move them from there when the reconstruction is completed since they will have ‘got used to’ being there.

“After the complaints in 2016 and the articles in the press and the repeated intervention of the Gendarmes before Hurricane Irma, they moved to Coralita on the point where there is the ‘viewpoint.’ There they continued their illegal practices; but at least they were not in a residential area and people stopped on the vacant lot by the roadside so they didn’t bother anyone.

“We will be very grateful if you can ask your services to do the necessary by explaining to (or even issuing warnings) these time-share sellers that their practices are not legal on the French side and that they cannot stay there.

“A few weeks ago an article was published in the newspaper of the Dutch side; The Daily Herald; in which the president of the time-share association complained about the illegal way to sell time-share on the Dutch side of the road; so these sellers moved to the French side because there they are not told anything; but it is also illegal on the French side. It is therefore absolutely essential that the French authorities also react immediately to prevent them from settling on the outskirts of our roads!”

Préfecture implements travel restrictions from July 31 due to COVID-19 resurgence...