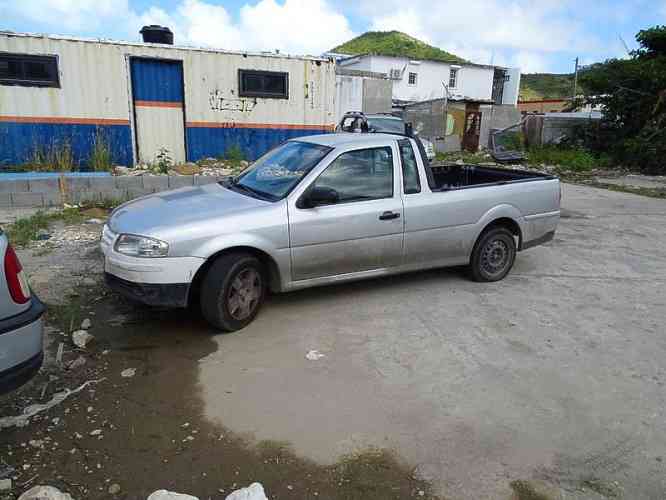 Two of the vehicles confiscated following inspections of construction sites.

MARIGOT–Police aux Frontières (PAF) is currently carrying out inspections of construction sites to identify infringements of the labour legislation with controls checking for breaches of hygiene and safety regulations, clandestine work, lack of display notices, and employment of undocumented foreigners.

Prosecutor Yves Paillard disclosed Wednesday a construction company from St. Maarten run by a French national was inspected at a house reconstruction site in Lowlands on January 15, 2018, and found to have employed three foreign workers, not declared and not authorised to work in France. Two of the workers were of Guyanese origin and one was Swiss.

The French national had moreover been banned from managing a company in France following a bankruptcy proceeding. This same construction company was controlled again in Marigot on January 18, near the former Grand St. Martin Hotel, at a site employing three salaried and unauthorised workers from Guyana. Other infringements were identified concerning safety regulations.

The French manager is due to be summoned to court once investigations into the responsibilities of the client and the contractor have been established. Two vehicles pertaining to the two operations were also seized.

On January 9, 2018, a construction site was controlled in La Savane with three undeclared workers from Haiti and St. Lucia.

The Prosecutor’s release further stated that a second meeting of the commission on environment and urban policies was held in partnership with the Collectivité (urbanism department) on January 17, 2018, in the presence of Préfet Philippe Gustin, Préfète Déléguée Anne Laubies, and Chief Prosecutor Samuel Finielz.

Controls to identify clandestine work and employment of foreigners without documents will be systematically doubled and conditions for reconstruction (production of work declaration, building permit, and conformity with the Plan de Prevention des Risques Naturelles PPRN) will be verified. Non-conformity can result in construction being halted immediately.