Home Local News Paige: ‘No other destination so close to the cruise lines as St.... 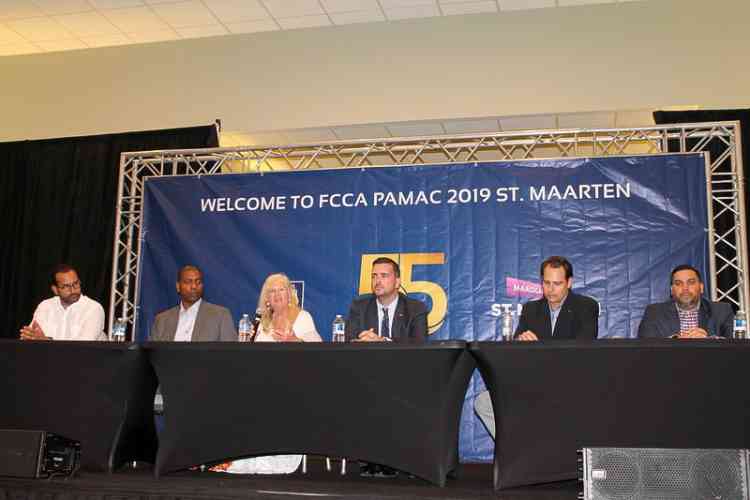 MAHO–Florida-Caribbean Cruise Association (FCCA) President Michele Paige and cruise-line executives praised the close partnership the cruise lines have with the government of St. Maarten in continuing to foster the rapid growth of the industry, on the eve of the FCCA Platinum Associate Membership Advisory Council (PAMAC) conference taking place at Sonesta Maho Beach Resort, Casino and Spa.

At the press conference Paige emphasised how young the industry still is.

“In 2019 the cruise industry is hosting only 30 million passengers globally. That’s tapping in to only two per cent of the world population. The cruise industry operates all over the world and the Caribbean accounts for a third of our world deployment. But if you consider that Orlando [Florida – Ed.] hosted 70 million guests in 2018, there is considerable room for growth. The cruise industry is putting big bucks into this growth; 70 vessels will be built in the next eight years,” she said.

Paige gave an overview of the support and investment the cruise industry has given St. Maarten since the 1990s and after successive hurricanes.

“After the 2017 hurricane we sent out-of-service ships to help evacuate people and bring in supplies. In 2018 our economic impact study showed that passenger spending was improving and 60 per cent of cruise passengers wanted to come back to St. Maarten. We spent US $1 million on an advertising campaign to showcase that St. Maarten was coming back. Three weeks after the hurricane the first cruise ship was back because it was good for St. Maarten to have the tourist dollars,” she said.

Asked whether the FCCA is assisting the development of cruise facilities on the French side if the island, Paige said: “Absolutely. Our guests enjoy going to the French side. We did already sit down with the previous government to review their plans. If it makes sense for the cruise lines we will contribute financially.”

Royal Caribbean (RC) cruise line Vice-President of Government Relations Russel Benford described St. Maarten as a “jewel” and its port as a well-run model for other destinations to follow.

“We want to grow with you as the industry grows and strengthen our relationship,” he told Minister of Tourism Stuart Johnson.

Carnival Corporation Vice-President of Port Operations and Development David Candib commended the port and the government on behalf of guests and crew for continuing to make investments and listening to the industry.

“Our people are the component of our past success as a destination, and we intend to continue with specialised training programmes to further enhance the service, educational and cultural standards in St. Maarten,” he said. “Sixty-one per cent of Dutch-side hotels and timeshare units have been restored, improvements are visible on both sides, 36 per cent of hotels on the French side have been restored and many of our best restaurants are back on line.”

He said completion of the Phase Two $14-million roof restoration programme At Princess Juliana International Airport is just days away and is part of moving into the remainder of the terminal building, which will include US preclearance on full restoration.

“Cruise arrivals have risen dramatically in the first quarter of 2019 with a recorded 84.4 per cent increase in arrivals over the same period in 2018,” he said. “We have also celebrated inaugural calls of several ships. The need for additional berths is of paramount importance, as more ships are being deployed in the region and that’s why we are progressing with the expansion of our cruise facilities; restoration of Pier One and expansion of Pier Two.”

PAMAC brings together 200 FCCA Platinum members and 20 high ranking FCCA member cruise line top executives and chief executive officers (CEOs). The event enables Platinum members and member lines to stay at the forefront of information about the industry and destinations while finding ways to maximise benefits for all.