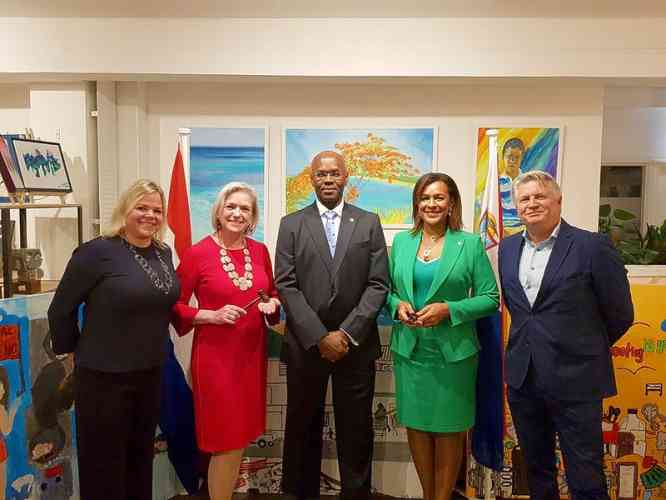 An auction of the paintings by St. Maarten students on Tuesday was held at the Domo Eclectica art store in The Hague.

THE HAGUE–Paintings created by St. Maarten schoolchildren about Hurricane Irma were auctioned in an art store in The Hague on Tuesday. The preliminary sales amount of 5,700 euros will go towards the schools that took part in the “Too Cool to Loot” project.

The project was an initiative of the United Nations children’s rights organisation UNICEF and the St. Maarten government. St. Maarten Minister Plenipotentiary in The Hague Jorien Wuite hosted the event at the Domo Eclectica art store, with St. Maarten Governor Eugene Holiday as special guest.

“The children experienced the forces of nature and were also impacted by events after the hurricane. In an effort to help them cope with their fears and concerns and to digest what had occurred, UNICEF, together with the Ministry of Education, Culture, Youth and Sports (ECYS), designed a programme in which schools and afterschool programmes were given art materials for children to paint on canvas. In this way, the children were able to express their feelings and concerns,” said Wuite, who helped to materialise this project when she was ECYS minister.

Guests were able to bid on 14 paintings, and all proceeds generated from the auction will go directly to the participating schools and afterschool projects as a contribution to strengthen their arts and crafts departments and classes. The auction was a success, with 10 of the pieces having been auctioned off on the spot.

Tuesday’s auction was well-attended by entrepreneurs from St. Maarten and the Netherlands, and by persons who undertook private initiatives to raise funds and organised collection drives after Hurricane Irma devastated St. Maarten in September 2017.

Governor Holiday thanked them for their input. “I am pleased with your presence here this evening, because our interaction is the best foundation for mutual understanding, lasting friendships and effective partnerships of cooperation,” he said.

In his speech, Holiday mentioned tourism, sustainability, education, health care and justice as examples of areas in which investments are much needed. “I believe it is our joint obligation to continue to move forward as agents for partnerships between our countries for mutually beneficial cooperation,” he told the audience.

The auction in The Hague was a follow-up to the auctions in St. Maarten. The transport of the paintings to the Netherlands was sponsored, so the total proceeds of the auction can go to the St. Maarten schools. A number of paintings are still open for bidding.