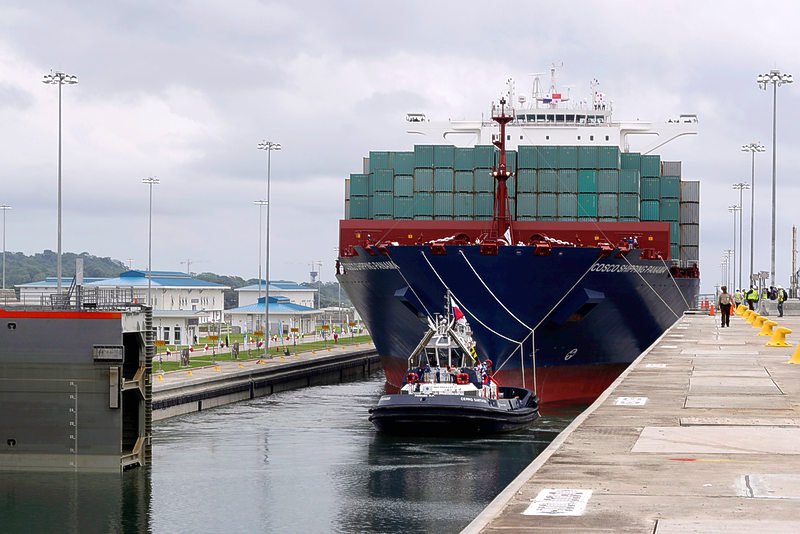 PANAMA CITY–Panama opened the long-delayed $5.4 billion expansion of its shipping canal amid cheering crowds on Sunday, despite looming economic uncertainty in the shipping industry and a heated battle over billions in cost overruns.

At 7.50 a.m., the Chinese container ship “Cosco Shipping Panama” entered the Agua Clara lock on the Atlantic to begin the first crossing of the roughly 50-mile-long (80.45-km-long) waterway and was due to emerge on the Pacific side by 5.00 p.m.
The expansion, which triples the size of ships that can travel the canal, allows the country to host 98 percent of the world’s shipping and is aimed at wresting market share from rival Suez and U.S. land routes made cheaper by low oil prices. By 2021, the Panama Canal Authority (ACP) is hoping the project will bring in $2.1 billion per year in added revenue, representing 2.8 percent of gross domestic product.
“As a Panamanian, I am proud,” said Odalis Castillo, an 18-year-old student who attended the launch. “There will be more money to spend on social projects.”
But the ACP is enmeshed in a $3.587-billion conflict over cost overruns with Spain’s Sacyr and Italy’s Salini Impreglio, which won the project in 2009 and finished it two years late, amid construction setbacks and strikes.
It also faces challenges like the supply of fresh water needed to move the giant locks and safe handling of the huge ships.
So far 170 ships have signed up to use the canal in the next three months. If the industry perks up, the ACP already has a $17 billion plan for a fourth set of locks to lure even bigger ships that can now only travel through the Suez Canal.
Just a dozen of the 70 heads of state invited to see the debut of the third set of locks attended the ceremony but Panama’s Foreign Ministry hailed the event a diplomatic success, with representatives from nearly all the invited countries in attendance.
Analysts said the rank of those leading the delegations was affected by the Panama Papers scandal, in which millions of documents were leaked from law firm Mossack Fonseca, revealing how some of the world’s richest people use offshore companies to avoid tax and launder money.
Jill Biden, the wife of U.S. Vice-President Joe Biden, led the delegation from the United States, which finished building the canal in 1914, controlled it until 1999 and is still its biggest user.