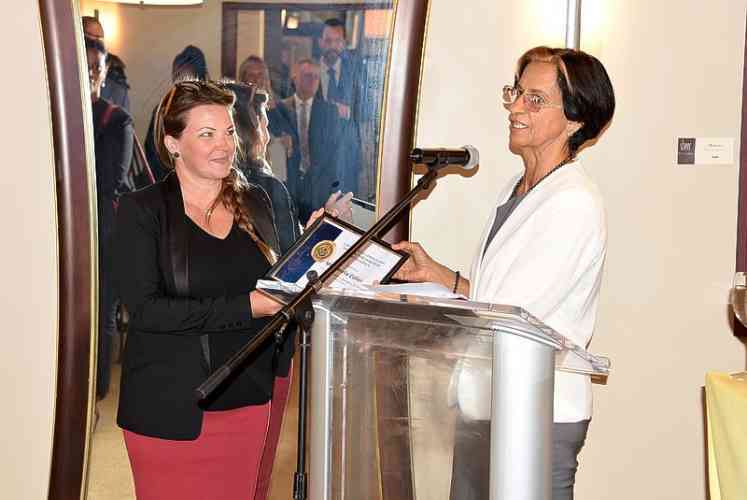 One of the recipients receiving their certificate of appreciation.

PHILIPSBURG–The Parliament of St. Maarten on Tuesday recognised persons in the community for their contributions in protecting the environment for current and future generations, during a reception held at Sheer restaurant on the occasion of the opening of the new parliamentary year.

Beentjes is a young girl, who realised that within her district everyone really wanted to recycle, but they did not have a facility to do so and as a result she took the initiative and started a separation of garbage project in her neighbourhood and then added two more neighbourhoods. The separated recyclables which include plastic bottles, glass, cardboard and aluminium are picked up twice a week by Clean St. Maarten and processed.

Mendez, through his company, has just started a pilot programme in the House of Parliament by providing containers to separate paper, plastic, carton and tins. This all is done free of charge.

Hammond received special recognition for his contribution by assisting with the restoring of the coral life around the island. Reef-It Snorkel Park also educates youngsters on the island on how to protect the coral around St. Maarten.

EPIC always cleans St. Maarten’s beaches and also cuts paths for tourists to walk and hike in St. Maarten. This enhances the environment for all residents and tourists alike. EPIC representative Natalia Collier was present to receive the certificate on behalf of the organisation.

In remarks at the ceremony, Wescot-Williams alluded to persons who have been providing food and homes for stray animals on the island. She said when the animals are homeless and hungry on the street it becomes a hazard for the environment. The Chairperson of Parliament reminded persons that animals are also part of the St. Maarten environment; hence the reason for thanking all persons for going the extra mile in safeguarding the environment.

Last year Parliament recognised persons who were helpful in their communities, after the passing of the devastating Hurricane Irma in September 2017.