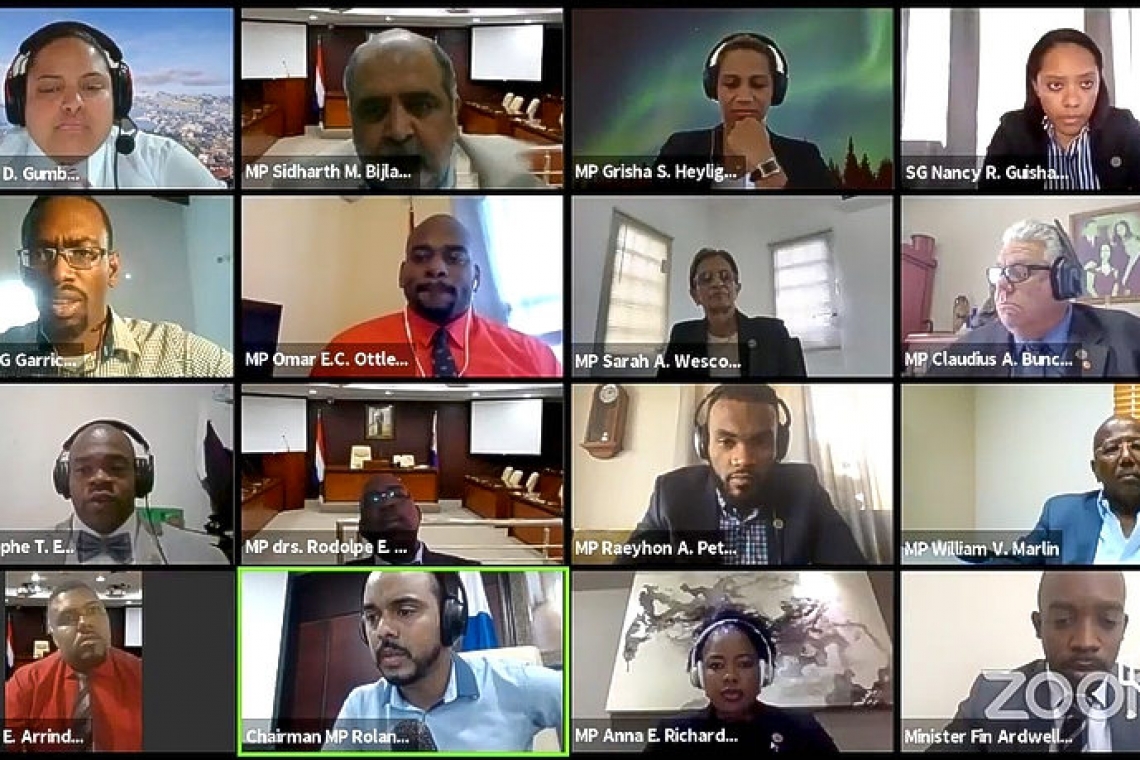 MPs during the virtual meeting on Monday.

PHILIPSBURG–St. Maarten is expected to receive the remaining funds from the country’s 12.5 per cent shares in the sale of United Telecommunications Services (UTS) within about ten days.

This is possible thanks to the unanimous passing of the national ordinance amending the authorisation of the national ordinance for the disposal of UTS shares by Members of Parliament (MPs) on Monday. The meeting and voting were held remotely online and go down in history making the Parliament of St. Maarten the first in the Kingdom of the Netherlands to digitally vote on a law.

With MPs adhering to social distancing directives in the wake of the coronavirus COVID-19 pandemic, Parliament meetings will now be held via video/remote conferencing until further notice. MPs, some with personalised backdrops, participated in the meeting from their homes or private offices.

The law amendment allows the adjustment of the maximum price of the sale of the shares, which in turn allows Minister of Finance Ardwell Irion to collect the second half of the payment from the sale. St. Maarten already received the first half late last year. Irion was also present in the remote conference from his location in the Government Administration Building.

Irion told MPs during the meeting that the remaining funds from the sale will be placed in government’s general coffers. The funds are expected to be received 10 days after the passing of the law. Irion plans to inform the buyers of the passing.

A total of NAf. 1.9 million from government’s treasury was used to pay around 250 justice workers part of their retroactive payment in January. The payment began around January 10. The decision was made to pay the workers via the treasury and not hold it up any longer. The first tranche of the settlement from the UTS sale was paid on September 10, 2019, which amounted to NAf. 9,206,975.34.

In their questioning during the meeting, several MPs focused on the stimulus package on which government is working to alleviate the effects of COVID-19 on the country.

Irion said the package is not yet finalised in terms of where the funds will come from. Calculations of the financial impact were made, which fell in line with those of the Central Bank for Curaçao and St. Maarten (CBCS). A conference was held with the International Monetary Fund (IMF) and other Ministers and Finance Ministers in the Caribbean last week, and each island chimed in on their current situation in their request for funds.

Despite St. Maarten’s position in the Kingdom, Irion said a request was still made for IMF funding, but this was denied. St. Maarten then requested that the IMF make an economic impact analysis for the country, which he said he can use to request funding from other sources. Irion is hoping to have a position from IMF by the end of this week to strengthen the country’s position on why it requires the funds it is requesting from the Netherlands, for example.

He said it is not feasible at this point in time to have “long-drawn-out” procedures as it relates to funding to mitigate the effects of COVID-19. The Netherlands will be asked to eliminate some of the red tape and bureaucracy when it comes to funding. If St. Maarten is unable to borrow or receive funding from the Netherlands, the country will have to be given an opportunity to borrow on the open market, Irion said.

He said it is not wise to use Trust Fund monies for COVID-19-related matters, as these funds are earmarked for Hurricane Irma-related projects.

“When the topic first came up on using Trust Fund money for COVID-19, I was against it personally and I said in my opinion is it unfair for us to use the Trust Fund money that has been allocated for Irma to come now and use it for another issue, because at the end of the day when this is all over, teachers will come and ask me when they will get their school. There are six schools on the line, there are shelters to be built and the SME programme (etc.),” Irion noted.

He said what should happen is for the Trust Fund monies to be expedited so that projects can start and the funds can circulate in the economy. After being pressed by an MP, Irion said he agrees that COVID-19 is a serious matter and “if push comes to shove” and the only funds that are available are those from the Trust Fund, then “that will have to be the way.”

At the moment government is “under financial stress,” as it is already in a deficit position and is also requesting the promised liquidity support from the Netherlands. Justice workers were paid from government’s general coffers and the funds will be used to replenish those funds. He said priority is currently being given to expenses related to COVID-19.

MP Rolando Brison (United People’s (UP) Party) said during the meeting, “The timing of this could not be better, as government needs every guilder it can get to drive us through the tough times that are undoubtedly ahead. Minister Irion indicated the payment would go directly into the liquidity which is already being used for [COVID-19 – Ed.] recovery.”

The first step in the process for the sale of the UTS shares was Brison’s initiative law of September 3, 2019, a national ordinance authorising the selling of the UTS shares. A contract was signed between UTS and St. Maarten on September 9, 2019. On October 22, 2019, the Council of Ministers approved the draft national ordinance amending Brison’s initiative law authorising the selling of the shares in UTS to be forwarded to the Council of Advice. That council’s advice was established on November 5, 2019.

The issue at hand was that Brison’s initiative law stated that the minimum price for the sale of the shares could not be less than NAf. 20 million. However, the contract that was signed after the initiative law does not make any mention of a minimum price. Instead, the contract mentions that there is a “headline purchase price,” which has to be adjusted to a “final St. Maarten purchase price,” which was not known at the moment of signing, because calculations had to be made.

Questions were raised as to what exactly was meant by the term “minimum price” in the national ordinance and whether this should be a minimum price before or after purchase cost. According to the contract, this uncertainty had to be clarified by amending the wording in the national ordinance authorising the selling of the shares. With the amendment passed, the ordinance is now aligned in accordance with the contract.

A first tranche of the settlement from the sale was paid to St. Maarten on September 10, 2019, after the signing of the contract. The contract stipulates that there is a holdback amount (buffer) of which the pay-out amount depends on the agreement between the Government of Curaçao and the buyers on the final purchase price calculation for all UTS shares. This buffer will be used for the settlement of any result of the calculation of the St. Maarten purchase price.