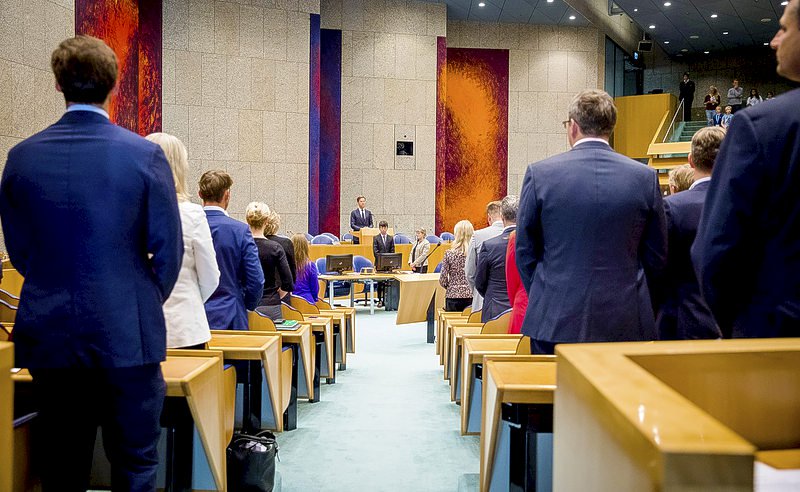 THE HAGUE–The Second Chamber of the Dutch Parliament on Tuesday observed a moment of silence for St. Maarten and the victims of Hurricane Irma. President of Parliament Khadija Arib and Prime Minister Mark Rutte addressed the Parliament. A similar observation took place in the First Chamber, the Senate.

After acknowledging the presence of St. Maarten Minister Plenipotentiary Henrietta Doran-York, President Arib asked everyone in the plenary hall to stand. The entire Second Chamber was present for this solemn observation.
In her speech, Arib spoke of the “most severe hurricane” that St. Maarten faced in history, the “very anxious” experience that the people went through and how the “beautiful” St. Maarten was destroyed.
“The desperation is great,” said Arib, who has conveyed her deepest sympathy to the Parliament of St. Maarten and the Island Councils of St. Eustatius and Saba on behalf of the Second Chamber.
“Even though we are separated by 7,000km of water and land, we feel closely connected with the Caribbean part of our Kingdom. It will take time and strength, but we truly hope that the islands will recover from this extreme natural disaster. We wish you much strength in the coming days and months,” said Arib.
Prime Minister Rutte then addressed the Parliament. “An eye witness called Hurricane Irma “the most wretched monster that ever passed. And that says everything about this ruthless ordeal that the Caribbean part of our Kingdom had to deal with last week. Irma has left a trail of destruction in our Kingdom.”
Rutte said that the beautiful Windward Islands have been “changed behind recognition.” He spoke of the mass destruction to buildings and homes. “Lives are literally and figuratively in ruins.”
He described the great fear that people went through during the hurricane’s passage. “A resident said: ‘Everything came down, collapsed. I thought we would die.’ Words that show you how great the desperation is when everything that is normal, food, running water, a roof over your head, are suddenly gone.”
Rutte once more assured that the Netherlands would not abandon St. Maarten. “We stand beside our people in the Kingdom and are doing everything to offer urgent emergency relief, and to make sure that things are restored for the inhabitants as soon as possible. And safe, because looting and violence are unacceptable.”
He called on the people of the Netherlands to donate, and said he was intensely grateful for the help of the military, the emergency workers and the Governments of Curaçao and Aruba. “It will take a long time before normal life is restored. The people will have to rebuild their lives and we will help with that.”
After Rutte’s speech, a moment of silence was observed. The meeting was then adjourned for a short while to enable Members of Parliament to shake hands with Minister Plenipotentiary Doran-York and to share words of comfort with her.
The Senate also observed the natural disaster in the Windward Islands at the start of its plenary meeting on Tuesday. Senate President Ankie Broekers-Knol said that the islands had been hit by “unmatched violence of nature” and that the hurricane had “caused a totally destructive path” with St. Maarten being the biggest victim.
Broekers-Knol said that a lot of hard work was taking place to assist the islands, especially by the Dutch Marines. “The reconstruction will take enormous efforts. The Caribbean part of the Kingdom deserves our support.”