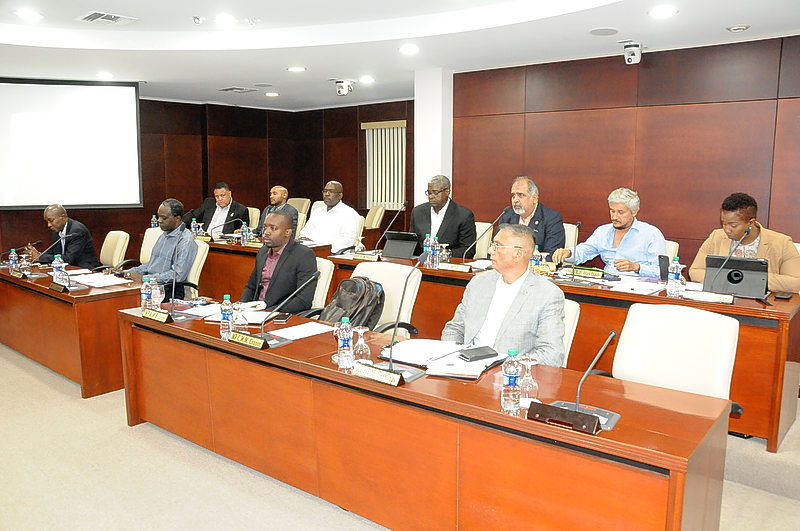 PHILIPSBURG–The pending appointments of the Social Economic Council St. Maarten SER board members was the urgent topic discussed by Members of Parliament (MPs) on Monday, but the advice dealing with the board members’ appointments is already in the hands of Governor Eugene Holiday for further processing.

The meeting was requested by MPs Tamara Leonard, Franklin Meyers, Sidharth “Cookie” Bijlani, Theo Heyliger and Claret Connor. The meeting was postponed after several speakers questioned Minister of General Affairs/Prime Minister William Marlin’s handling of the appointments and why it had taken nearly a year for Government to make a decision.
Leonard said in her opening remarks, “According to paragraph 4 of the National Ordinance Social Economic Council, the SER informed the Prime Minister on June 15, 2016, that the Prime Minister needed to decide which organisations will be awarded seats on the SER board for the tenure 2017–2020.
“The Prime Minister never responded to that letter. The SER continued sending reminders and requested the Prime Minister to meet regarding this topic. The then SER Chairwoman Oldine Bryson-Pantophlet managed to make an appointment with the Acting Prime Minister, Minister Boasman, and his advisor Len Dijkstra on Tuesday, February 21, 2017.
“In that meeting it was discussed which organisations are (still) representative according to article 3 paragraph 4 of the National Ordinance Social Economic Council and the number of seats that would be awarded to which organisation. The Acting Prime Minister had to confirm the content of the meeting with the Prime Minister and report to the SER, which was done by Len Dijkstra on March 22, 2017.
“Immediately after this confirmation, on March 23, 2017, the SER sent out letters to all organisations that qualified for one or more seats in the SER. A letter was also sent on March 22, 2017, (with SER reference SER/17/DCB/02) to the Prime Minister requesting him to nominate three (new) independent members and their substitutes, according to article 3 of the National Ordinance Social Economic Council.”
After numerous requests on the status of the national decree on the appointment of the SER board 2017–2020, the SER Secretary-General received a first draft of the SER board 2017-2020 on Wednesday, July 12, 2017 from the Secretary-General of the Ministry of General Affairs. However, one organization was awarded one too many seats, as the SER board should consist of nine members while the draft national decree mentioned 10 members.
“It appeared that the Prime Minister suddenly changed his mind about the number of seats that would be awarded to one organisation. On August 25, 2017, the Acting Prime Minister sent a letter to that organisation explaining that they had to give back one seat and correspondingly submit the name of one person.
“There was some back-and-forth on this matter and the SER Secretary-General was informed that this had been solved and that the draft national decree was sent to the Cabinet of the Governor for signing,” according to MP Leonard.
She said that while going through the country’s budget, “I have noticed that the SER was placed under the budget of the Ministry of General Affairs. The SER used to be under Chapter 2 with the High Councils of State, even though the SER is not a High Council of State.
“SER is recognized as an independent advisory body throughout the Dutch Kingdom. The SER is not a department of the Ministry of General Affairs. The Ministry of General Affairs is defined in the National Ordinance concerning Country Government Organisations in Dutch (Landsverordening Inrichting en Organisatie Landsoverheid (LIOL)) and further established in the organisation decision of the Ministry of General Affairs.
“The SER is not included in the LIOL, which means there is no legal basis to have the institution placed under the Ministry of General Affairs. Why was the SER moved from chapter 2 of the budget and placed under chapter 3 of the Ministry of General Affairs? When was this decision taken, who issued the order and based on what law was this executed?
“How does this work in practice? For example: if the SER board orders its SG to perform a certain task can the SG of General Affairs overrule that decision? Who has the final say? The SER board, which is an independent institution with its own National decree, or the SG of General Affairs?”
MP Frans Richardson was very critical about the intentions of the members who called the meeting, calling the public meeting a waste of time. “People do not want to hear about who is being appointed to SER … they want to know how they can fix their roofs,” he stated. “The Dutch are creating the divide between us all in here. We need to stay strong for the people and stop worrying about petty things. We need to put focus on important issues for the people of St. Maarten.”
Prime Minister Marlin in his answers gave an overview of the selection process and answered some questions from the members. He did not answer all of Leonard’s questions.