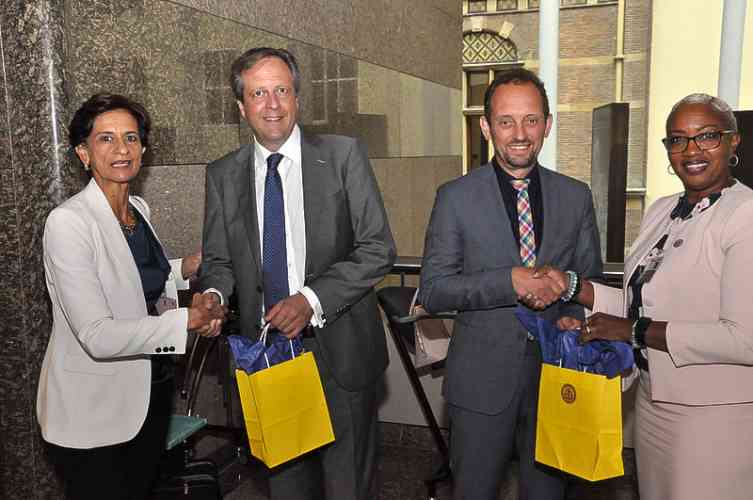 THE HAGUE–The Parliaments of Aruba, Curaçao and St. Maarten anticipated a struggle at the Inter-Parliamentary Consultation of the Kingdom IPKO about the realisation of a Dispute Regulation for the Kingdom. Instead, they found their Dutch colleagues on their side. That set the tone for a positive IPKO.

The three Dutch Caribbean parliaments and the Dutch parliament showed in The Hague this week that they are very capable of working together, while displaying mutual understanding and showing respect for each other’s viewpoints. The four parliaments positive approach could serve as an example for their governments.
“Apart from the agreements that we arrived at, the IPKO was a success because of the discussions that we held based on respect and equality. This can serve as an example for our governments,” said Chairperson of the Committee for Kingdom Relations of the Aruba Parliament Rocco Tjon at the press conference on Friday following the signing of the agreements list.
“The highlight was the absence of a low at this IPKO,” said leader of the Dutch delegation Senator Ruard Ganzevoort. “We were pulling at the same end of the rope,” he said, lauding the efforts by all delegations to strengthen the cooperation.
The Dutch Caribbean delegations considered the common position on the Dispute Regulation (geschillenregeling) the highlight of the IPKO. The four parliaments sent a clear message to State Secretary of Home Affairs and Kingdom Relations Raymond Knops that the law proposal for a Dispute Regulation should reach the Second Chamber of the Dutch Parliament no later than November 1 this year, and to provide an action plan before June 18.
“Important steps were taken with the Dispute Regulation being a good example. An instruction has gone to the state secretary,” said St. Maarten delegation leader Sarah Wescot-Williams. She said her delegation was “quite satisfied” with what was agreed upon during this IPKO.
Chairperson of the Committee for Kingdom Relations of the St. Maarten Parliament Silveria Jacobs shared the view of the Aruba and Curaçao delegation that the joint approach where it pertained to the Dispute Regulation was a highlight of this IPKO. “We decided to move forward together on this matter,” she said.
Another topic on which all delegations agreed was the importance of cooperation to implement the Sustainable Development Goals (SDGs). It was agreed to continue working together to prepare documents for the next IPKO, which will take place in St. Maarten from January 8 to 11, 2019.
At the next IPKO, delegations will continue their talks about the Dispute Regulation as by then they should have received the law proposal of the Dutch government along with the advice of the Council of State. “We will try to maximise the benefit for our countries,” said Aruba delegation leader and Chairperson of the Aruba Parliament Ady Thijsen.
Curaçao delegation leader and Chairperson of the Curaçao Parliament William Millerson announced that in preparation for the next IPKO in St. Maarten, the Dutch Caribbean countries had decided to intensify the contact and to assist each other.
The subject of a possible revision of the Kingdom Charter was added to the agenda of the next IPKO on the request of Member of the Second Chamber André Bosman. According to Bosman, the discussion about equality within the Kingdom cannot take place without a dialogue about the Charter, the document that forms the basis of the relations.
“The intention of the Charter was for the countries to become ultimately independent and to have a process of decolonisation. The question is whether that is still up for discussion. Establishing a Dispute Regulation does the opposite because it creates a connection. It makes no sense working on establishing closer relations if we don’t know where we are heading. What do we want with the Kingdom? That is a cardinal question. If the islands want to retain their autonomous position in the Kingdom, that is fine, but then we should also talk about true equality. It cannot be a pick-and-choose situation,” Bosman told The Daily Herald.
The delegations said they looked forward to continuing their talks at the next IPKO in St. Maarten. IPKO Chairperson Alexander Pechtold said the visit to St. Maarten in January 2019 will provide an opportunity for the parliaments to see how the island is doing in the reconstruction phase.
Wescot-Williams: “We will see you all next year. God spare all lives during this hurricane season. We will work hard to make the next IPKO a successful event.”