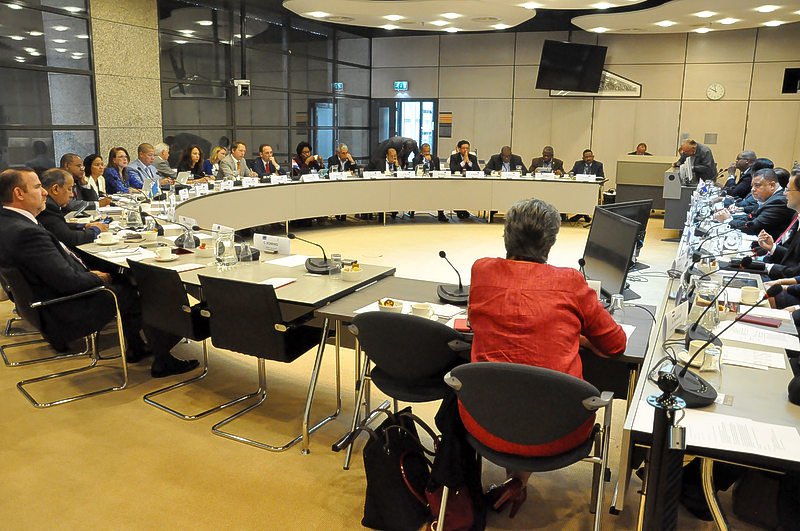 THE HAGUE–The Parliaments of the Netherlands, Aruba, Curaçao and St. Maarten will be sending a request to the Kingdom Government to draft a plan of action in case of a full-blown crisis in Venezuela with the associated mass migration to the Leeward Islands.

The four Parliaments, currently meeting in The Hague as part of the Inter-Parliamentary Consultation for the Kingdom IPKO, expressed their deep concern about the crisis in Venezuela. The effects on especially nearby Aruba, and to a lesser extent Curaçao and Bonaire, of a mass migration in the form of refugees would be detrimental.

Aruba, in fact, is already feeling the effects of the Venezuela crisis on a daily basis, said Member of the Aruba Parliament Rene Herdé of the AVP party. Crime has not only been on the rise in Venezuela, but criminals from the South American country have extended their working field to Aruba. “These semi-tourists are committing armed robberies and other crimes,” said Herdé.

Member of the Curaçao Parliament Amerigo Thodé of the MFK party said that Venezuelan criminals have been coming to his country as well, with the shooting at two Police officers as the most recent example.

Then there are also Venezuelan shoppers who come to Curaçao to buy consumer goods, but don’t have enough money to stay in a hotel. Instead, they sleep on the beach. “It is not a question of when, for the influx has already started,” said Thodé who called on his colleagues of the other Parliaments to take action. “We have to act as a Kingdom. This affects us all,” he said.

Member of the Curaçao Parliament Glenn Sulvaran (independent) compared the Venezuela situation to a hurricane. “This hurricane is getting stronger in force, and we know it will hit. We just don’t know when exactly. The situation is getting worse and Venezuela will not be able to get out of it on its own. In the worst case scenario, a civil war will erupt and people will get on boats in large numbers. They will want to get out, to the next best economic haven, which is us. We have to prepare,” said Sulvaran.

Herdé of Aruba concurred and said that people fleeing Venezuela would opt to come to the islands because there were no other possibilities since the borders with Guyana, Brazil and Colombia are closed. Aruba will surely help the refugee Venezuelans, said Herdé. “They are our friend, our brothers. We are affiliated.”

However, Aruba doesn’t have the physical and organizational capacity to provide shelter for a very large number of Venezuelan refugees, said Herdé. He said Aruba would want to send these people on to other countries such as the United States (US) and Panama.

Member of the Second Chamber André Bosman of the liberal democratic VVD party urged the countries to secure a legal basis on how to deal with refugees. He suggested introducing a visa obligation for Venezuelans who want to visit the islands in order to keep out refugees at the border.

Both Aruba and Curaçao objected to this suggestion of a visa policy. “This is a sovereign matter,” said Andin Bikker of Aruba’s PDR party. “This will also close the doors for wealthy tourists and potential investors. Besides, a visa is not going to stop a refugee. Having a visa policy is not the silver bullet,” said Alex Rosaria of Curaçao’s PAIS party.

Several Members of Parliament (MPs) called for a joint approach, and to actively involve the Kingdom and all its partners in dealing with the Venezuela situation because the Kingdom has a responsibility in this. “This cannot only be a problem of Aruba and Curaçao. This is a major issue that will happen. We have to deal with it now and do so together,” said MP Franklin Meyers of the United People’s party UP.

“We need to address this matter together, in uniformity. It requires our full attention. This is a critical security risk for the Leeward islands,” said independent Member of the St. Maarten Parliament Leona Marlin-Romeo. She said that St. Maarten would be in support. “Because what affects you, affects us.”

Senator Henk ten Hoeve of the Independent Senate’s Party OSF said that the plans should be ready in case the storm hits. “This is a shared responsibility and if part of the associated costs have to be covered by the Netherlands, so be it,” he said.

Vice-chairman of the IPKO, Senator Ruard Ganzevoort asked in what manner the governments could be encouraged to draft action plans and to make preparations for an eventual mass migration. The Aruba, Curaçao and St. Maarten delegations also underscored the importance to draft a plan together.

The delegations then mulled on how to go about this. Member of the Second Chamber Roelof van Laar of the Labour Party PvdA proposed to put this on the agenda of the upcoming Kingdom Conference. However, because the Kingdom Conference in St. Maarten will only take place in August, he asked about the possibilities of organising an extraordinary Kingdom Conference on this topic.

Organising a conference on short notice would be difficult, and so, after some deliberation, it was decided to draft a letter with the wishes of the IPKO to the Kingdom Council of Ministers so the countries can jointly deal with this matter. In the letter, which will be sent as soon as possible, the Kingdom Government would be asked to look at the social and economic implications of the crisis of Venezuela, as well as refugees and military aspects.