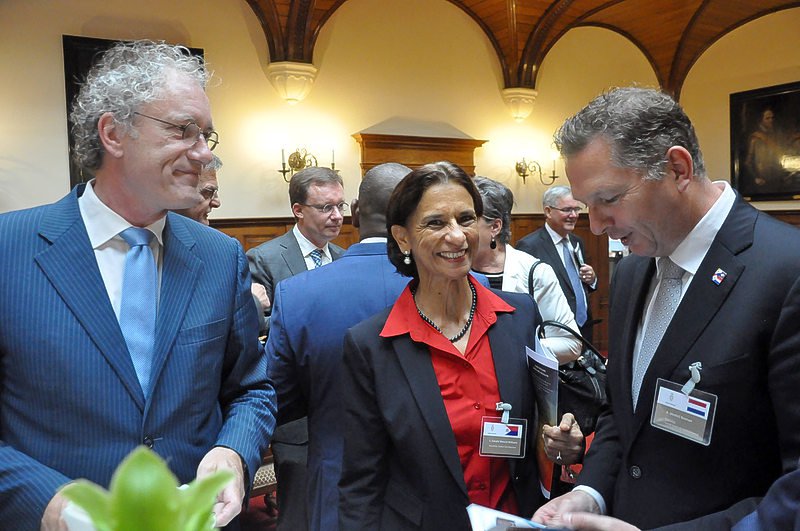 THE HAGUE–The four Parliaments of the Kingdom want their Governments to give follow-up to the Paris Climate Conference COP21 with a concrete plan on how to tackle the effects of climate change.

It was Chairperson of the St. Maarten Parliament Sarah Wescot-Williams who brought up climate change and the Paris accord of December last year in her opening remarks of the Inter-Parliamentary Consultation for the Kingdom IPKO on Tuesday morning. Climate change and the COP21 accord which aims to limit the increase of the average temperature to 1.5 degrees Celsius is a new topic on IPKO’s agenda.

Wescot-Williams said this issue, which has been generating more general interest, needs the proper attention of the Dutch Kingdom. “Our Kingdom will have to deal with this issue in the near future and come with solutions. Climate change will undoubtedly have consequences for the Dutch Caribbean countries as SIDS, Small Island Developing States,” she said.

“St. Maarten as the smallest country of the Kingdom faces this challenge which will manifest itself in a higher sea level, stronger hurricanes and beach erosion. St. Maarten hopes to deal with this phenomenon together with the other Kingdom partners through cooperation and assistance,” said Wescot-Williams at the opening of the IPKO.

Curaçao Member of Parliament Glenn Sulvaran (independent) said that climate change forced the countries of the Kingdom to work together. He called on all Governments to draft a climate change strategy and a sustainable energy policy. He pointed out that Aruba and St. Maarten already had an energy policy and that Curaçao would be following soon.

In the afternoon session, the delegations further discussed the topic of climate change. “It is important that we urge our countries to give follow-up to the Paris accord. It is imperative that all countries have a climate change strategy and energy policy so we can exchange ideas and cooperate in this area,” said Sulvaran.

Member of the Second Chamber André Bosman of the liberal democratic VVD party said that the countries should move together to deal with climate change. His colleague Liesbeth van Tongeren of the Green Left party GroenLinks suggested drafting a joint plan. “Maybe we can assist each other on this matter.” She noted that the climate change issue was even more pressing for the Dutch Caribbean than for the Netherlands.

Member of the Aruba Parliament Rene Herdé of the AVP party explained that Aruba had high ambitions: by 2020 the island should be running 100 per cent on sustainable energy. “This is not a matter of choice, but of pure necessity. We know now that a sea level increase of a few centimetres will be a direct threat to our tourism product. This issue not only concerns Aruba, but the Kingdom as a whole,” said Herdé.

Wescot-Williams asked who would be in charge of giving follow-up to the Paris COP21 accord. “How do we ensure that actual content is given to the accord?” Van Tongeren suggested appointing one coordinating Minister per country.

IPKO Chairman Jeroen Recourt agreed that cooperation between the countries was important in order to give follow-up to the COP21 accord. “After all, the Kingdom signed that accord,” he said. André Bosman said that he wanted to see the Governments take concrete steps in this area and that the Parliaments would monitor the follow-up.

IPKO Vice-chairman Ruard Ganzevoort remarked that the Netherlands also had a responsibility for the Dutch public entities Bonaire, St. Eustatius and Saba that are confronted with the same problem of climate change as the Dutch Caribbean countries.

It was suggested during Tuesday’s meeting to include a recommendation regarding climate change and the specific follow-up actions in the Agreements List that will be signed by the four Parliaments on Friday.