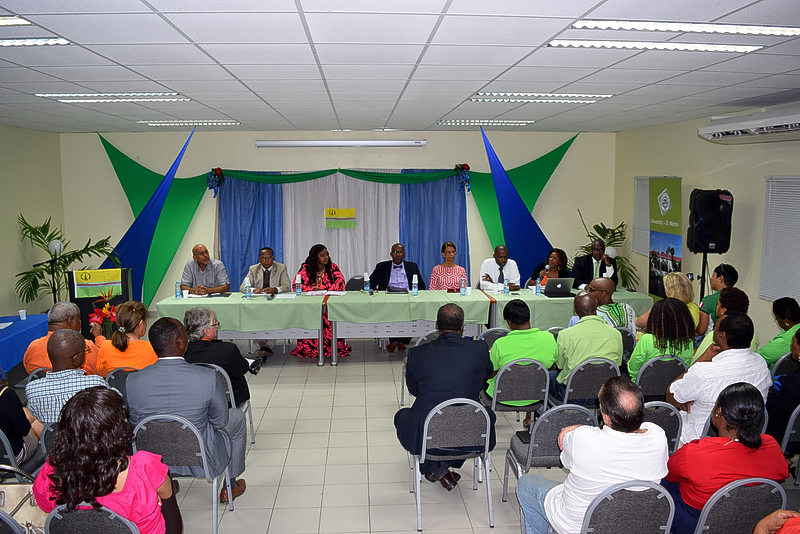 POND ISLAND–The option of independence for St. Maarten from the Dutch Kingdom is the right of the people, but eight of the nine parties represented at a debate at University of St. Martin (USM) on Sunday night do not have this constitutional move as a priority.

Party representatives were of the same mind on the topic saying there is still much to be done to better the country’s current standing. They also see the need for the people of the country to give its politicians the mandate to take up the charge for independence.

The lack of stability in Government is seen as the major obstacle to the country gaining independence.

Priest (OSPP) said stability is a major issue as is seen by constant changes in Government that had led to the September 26 Parliamentary Election, two years after the last election.

Van der Waals-Wyatt, HOPE leader, said the country needs stability in Government and must become self-reliant before moving to independence.

Smith, SMCP leader, said aside from battling instability, the Country-within-the-Kingdom is in dire need of human resources to better service the people. Without such resources, independence would not be viable.

St. Maarten must first determine its identity and define who belongs and create the conditions for real integration before it can move to full independence from the Dutch Kingdom, said Matser, SDM candidate.

The state of mind of the people must be for independence and they must own their identity, said Meyers, UP deputy leader.

Education of the people is important to help them to feel free to choose, said Arrindell, PPA leader.

The country has several serious issues to tackle first on its road to choosing for independence, said Challenger, NA candidate.

DP leader Wescot-Williams said the biggest obstacle to independence is “The people of St. Maarten have not spoken out yet.”

The parties all believe the biggest benefit of independence for the country will be the establishment of identity of the people and promote nationhood.

The ninth party in the race for Parliament – United St. Maarten Party (US Party) – did not have a representative on the debate panel. The party did have some of its candidates present in the audience.

The party issued a press release near the end of the debate stating US Party MP Frans Richardson was scheduled to be present at the panel discussion, “but had to return home after not feeling well en route.”