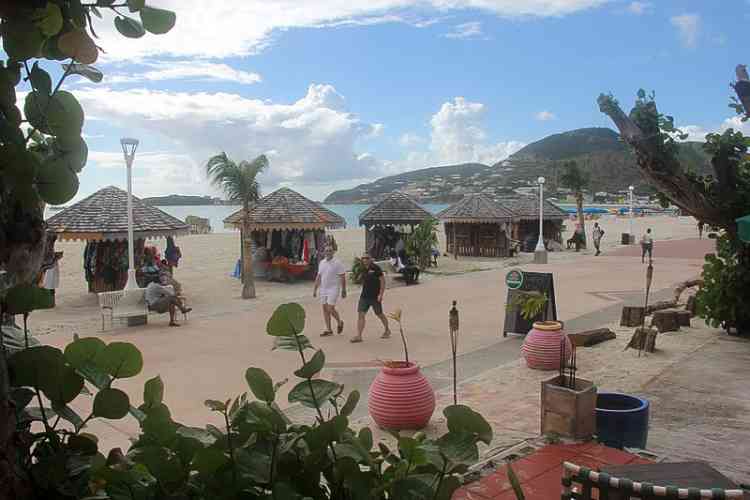 PHILIPSBURG–Pasanggrahan Royal Guesthouse management petitioned the Court in summary proceedings on Tuesday to order Country St. Maarten to remove six marketplace-vendor booths from the beach in front of the boutique hotel on Boardwalk Boulevard.

The Ministry of Tourism, Economic Affairs, Transportation and Telecommunication (TEATT) announced Tuesday on the Government Information Page that “due to the destruction caused by Hurricane Irma and to facilitate the beautification project for Philipsburg” three locations on Great Bay beach have been designated as marketplaces for a period of six months, “to be re-evaluated after that period.”
Besides on the beach in front of Pasanggrahan, these locations include the beach in front of Walter Plantz Square and in front of Honky Tonk bar.
In the public announcement pertaining to the designation of sections of Great Bay Beach as marketplaces, it was stated that vendors from all three marketplaces in Philipsburg, including those behind the Courthouse, next to the old fire station and next to RBC Bank will be relocated to the beach marketplaces “immediately,” as the former locations will no longer be designated as marketplaces.
On behalf of Pasanggrahan’s Managing Director Tini Tinitali and Office Manager C.P.A. Phillips, attorney-at-law Peter Bruns called on the Court to order the removal of the six market stalls in front of the boutique hotel.
“Pasanggrahan sits directly on beautiful sweeping beach with white sand and clear, turquoise waters,” the lawyer said in quoting the hotel’s website. However, the recently-erected market stalls block the hotel guests’ view and cause noise disturbance, “which detracts from the quiet beach near the boutique hotel,” stated Bruns.
He said his clients were “surprised and overwhelmed” by the sudden Government-ordered building activities on the beachfront. However, calls for a building stop were ignored and calls for a Court order, filed December 7, were rejected as the stalls were already in place.
The hotel was severely damaged by Irma. The main building and one of the two guestroom buildings were destroyed, but the hotel and restaurant are open and guests are welcome. Therefore, the hotel is suffering damage due to the presence of the market stalls and vendors, the lawyer claimed.
“My clients are busy rebuilding the hotel and have been hit hard by Government in these very difficult times,” he said. “They have to earn a living during the tourist season, which has started only recently.”
The supply and removal of market goods were reason for complaints by dissatisfied guests, as early-morning market activities deprived hotel guests of their sleep, said Bruns. “The hotel’s image is being destroyed by these market stalls,” he stated.
“Why can’t the old situation behind the Courthouse be restored? Of the 17 booths, only three were destroyed beyond repair. Why did Government not selected another, less damaging location, and why specifically in front of this hotel?” the lawyer wondered.
He claimed that the designation of Great Bay Beach as marketplace was not officially announced according to the rules, and contested claims that it concerned a temporary measure.
“The stalls are there to stay,” Bruns said. “They really have to go. There is no middle ground in this case.”
He said the measure was unjustifiably based on the National Ordinance on Public Street Trading, as this Ordinance does not sanction the erection of any structures.
Bruns said TEATT had violated the principles of public governance, had acted illegally and without a building permit, and had acted in contravention of the 1994 Beach Policy, in which it is stated that building on the beach is not permitted.
“Interested parties may file for objection, but this possibility has been taken from my clients,” said Bruns.
Attorney Richard Gibson Jr. said on behalf of Country St. Maarten that the damaged stalls had been removed by the Ministry of Economic Affairs as a precautionary measure.
“According to a letter sent on October 5 by Head of Public Works Claudius Buncamper, 27 of the 29 stalls were damaged. The two undamaged stalls were also removed. The stalls will be repaired with wood from Suriname and Guyana,” Gibson said.
To beautify and enhance Great Bay for visiting cruise-ship passengers, it was decided to relocate some of the best booths to three different locations for a period of six months. After that the booths will be replaced in the heart of Philipsburg.
Gibson stated that Government was not required to obtain the hotel owners’ permission to place the booths in front of their property, and contested that the hotel had suffered any damage as a result.
He said the placement of kiosks was part of the regular entrepreneurial risk. “The hotel consists of two buildings. One has been damaged to such an extent that no guests can stay there. The windows are boarded up. The kiosks have been placed in front of this damaged building. There is no evidence of guests having cancelled their reservations,” Government’s lawyer said.
He recalled that the hotel had also protested the construction of Boardwalk Boulevard, and suggested the hotel seek a different market segment “in which cosiness is being appreciated.”
Gibson said Government had not contacted beach residents, as it had not expected any problems, as its sole intention was to make the beach location “more fun.”
The Judge posed several questions and will give his decision January 3, 2018.