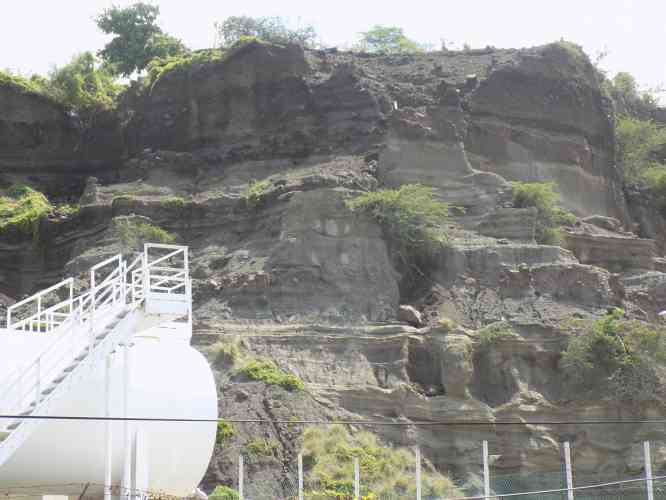 Large boulders and rocks on the cliff ready to come down.

A mudslide came down from the cliff behind the office of St. Eustatius National Parks STENAPA.

ST. EUSTATIUS–St. Eustatius received much-needed rain during the passing of Tropical Storm Isaac on Friday and Saturday. The wind did not affect the island as much as the rain did. The heavy rain which descended on the island caused quite a bit of damage and a few mudslides. Lots of damage was done to the cliffs and soil came down especially in Lower Town where the street turned into a muddy mess.

At the corner from King’s Well to Smoke Alley the water runoff created a dent in the road and the expected rainfall this coming week will make the dent become larger.

All along the cliffs beneath Fort Oranje and up to the St. Eustatius Utility Company STUCO power and water plant the cliffs are in a dangerous state. Many of the cliffs show quite large holes that have formed.

Along with the large holes, large rocks appear being on the cusp of rolling down the cliff. The backyard of the office of St. Eustatius National Parks STENAPA was completely filled with dirt that came down the cliff.

The old sugar mill behind STUCO’s water plant is being undermined by erosion. Members in the public want to take action to save the historic structure from tumbling down the cliff.

On Bay Path, the force of water caused a large hole in the pavement. The relevant authorities were notified of the state of the footpath.

As a report conducted by Royal Haskoning DHV concluded that the recent increased erosion caused by last year’s hurricanes created a dangerous situation for users of the path, it was closed off for the public on government orders.

However, a more recent survey by the same company indicated that the path could be used safely. Knops, accompanied by Government Commissioner Marcolino “Mike” Franco, opened the path by cutting the cordon tape that blocked access at the top of the path.