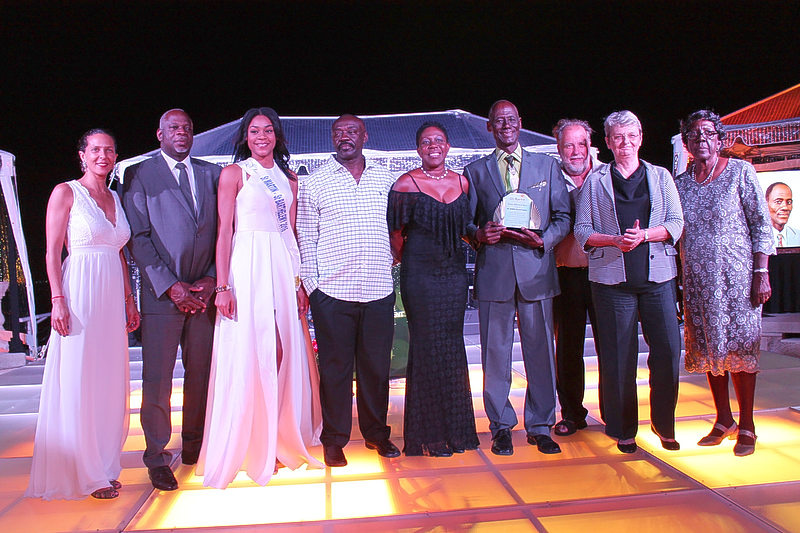 Making a return after a long absence, the Tourism Awards recognised several persons in three main categories who have contributed to tourism development over the years.

Hodge was presented with the award by Préfète Anne Laubiès and St. Martin Tourism Office President Jeanne Rogers-Vanterpool for the exemplary manner in which he has run his guesthouse over 30 years as a model tourism ambassador, overcoming setbacks such as the destruction from Hurricane Luis, resisting offers to sell, to rebuilding a business with an enviable repeat clientele.

One of those repeat guests, a Canadian visitor has stayed at the guesthouse for the past five years and is staying there for five months on this trip and joined Hodge on stage.

“The sentiment of friendliness exuded by our people is not something that is easily learned. I believe it is engraved in our very genes,” said Jeanne Rogers- Vanterpool in her introduction. “It can be perfected by training and professional development and reinforced by acknowledgement of a job well done. I stand before you tonight with great pride in the achievements of our service providers honoured tonight and that gives me confidence in the future of our tourism economy.

“You have served our visitors with a commitment for excellence. I say thank you to the selected few from our cherished tourism professionals who truly embody the concept of the friendly island.”

She closed with a quote from Derek Walcott: “Service without servitude, and pride in a job well done.”

Keynote speaker Vincent Vanterpool-Wallace talked of the challenges industries face through the advent of automation and robotics taking the place of humans, but said thankfully the tourism and hospitality industry is spared from this development.

“Tourism is the ultimate business that relies on the human touch,” he said. Without the human touch in tourism we can’t do it. There’s no such thing as personal service without it being provided by human beings. Poet Laureate Maya Angelou said: “You may not remember what people tell you, you may not remember what people do for you, but you will always remember how people make you feel. How people make you feel is what tourism is all about. The amazing thing about tourism is that you can have the best students and the best degrees, but the most important thing with tourism is something that we don’t measure and that is personality. What matters is people with wonderful personalities.”

The first category presented was “Tourism Special Awards.” Each category was preceded by a video presentation on the awardee.

Young singer Tamillia Chance (14) was recognised for representing St. Martin in the Voice Kids talent contest among other achievements. Her award was presented by Vice-President Wendel Cocks.

Other recipients in this category were the enduring Youth Waves Band members who have many times represented the island abroad, Christophe Hénocq for his work in archaeology, protecting the island’s heritage and developing the museum, William “BJ” Welch, caretaker of Loterie Farm, and Denise Shillingford Leclerc, employee from La Samanna.

“This award is not for me but for us, the community,” said “BJ” accepting his award. “Without your support and recognition that the future of St. Martin is in sustainable tourism I wouldn’t be standing up here tonight.”

The gala evening was emceed by Philippe Morel and Sarolia Ada and live music provided by Bobo Claxton and Friends. A temporary stage covered the villa’s swimming pool and for the early part of the evening, was occupied by two living statues from Funtopia.