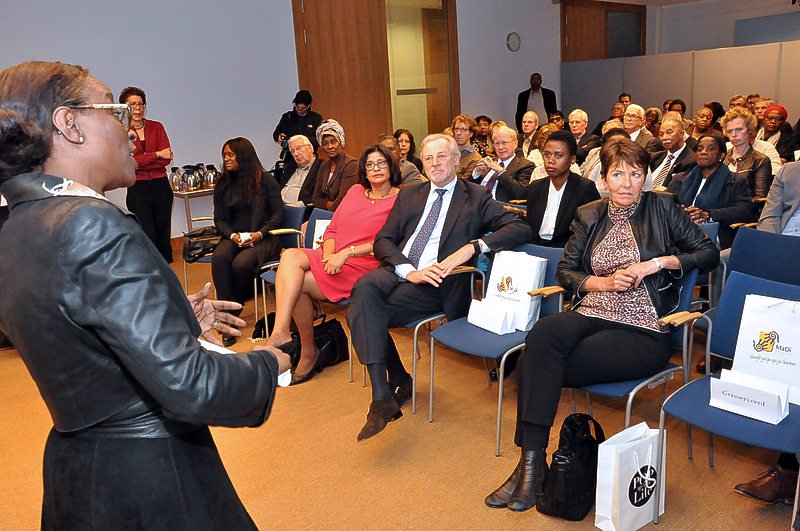 THE HAGUE–Any effort to tackle the rising poverty in St. Maarten as a result of the devastation caused by Hurricane Irma should be done with the local circumstances and culture in mind, according to Dr. Jurenne Hooi of the MaDi Foundation, an organisation that assists people with social and financial problems in the Amsterdam area.

Hooi, guest speaker at a lecture of the Ministry of Home Affairs and Kingdom Relations BZK last Thursday, cautioned against the forced implementation of the European culture in social development projects on the islands. If the local circumstances and culture are not taken into account, the result will be a “round jar with a square lid.”
In addressing the increasing poverty issue, which has become even more urgent after the hurricane, Hooi said that cooperation, a clear objective and a dose of common sense were needed by both the Netherlands and St. Maarten.
To start with, St. Maarten should formulate the right request for assistance. For its part, the Netherlands should not try to push through its own culture. “What works in the Netherlands doesn’t necessarily work on the islands,” MaDi Director Hooi told the audience at the well-attended lecture.
According to Hooi, it was very important to carefully listen to the islands’ organisations when planning and implementing social development projects that contributed to the eradication of poverty. “We need to listen more and try harder to understand each other’s culture,” she said when she was asked by The Daily Herald to share her thoughts about the current situation in St. Maarten. Aside from this aspect, she said that providing assistance to St. Maarten and its people in these times of extreme hardship was a “moral responsibility.”
Introducing the guest speaker, interim Director Kingdom Relations Henk Brons acknowledged that poverty needed a more prominent place on the political agenda within the Kingdom. Brons too mentioned Hurricane Irma and the devastation in the Windward Islands. He said that the Kingdom showed its best side during the phase of emergency assistance with active input of the Netherlands, together with Aruba and Curaçao.
In her lecture, the Curaçao-born Hooi elucidated on the comprehensive, inclusive system of poverty alleviation that MaDi worked with in Amsterdam Southeast and Diemen – a system that involved coaches, role models and realistic goals using the so-called Pop Up Your Life! method that focussed on positivism and the strength of the participants in finding long-lasting solutions.
A comprehensive approach is needed in poverty alleviation for it is a complex, rigid issue with many aspects and an enormous impact for individuals and families. Aside from the financial aspect of having debts, poverty leads to social isolation, a loss of self-confidence and friends, and severe stress. This is also generally referred to as “poverty stress.”
Physically, poverty leads to health problems and has an adverse effect on the development of the brain’s frontal lobe, but it also contributes to domestic abuse, school dropouts and a lower education level. Furthermore, it often results in criminal behaviour. Persons suffer from a shut-down, and are no longer able to plan, to think a day ahead, explained Hooi.
When she asks MaDi participants about their dream, most reply that they would love to be debt-free or to be able to go back to school. Together with the participant a Pop Up Your Life plan is made that involves a lot of contact moments, social connections and the use of role models in master classes like Stedman Graham, who grew up in poverty and who happens to be Oprah Winfrey’s husband. The key is to break the circle, said Hooi. “Often poverty goes over from one generation to the next.”
There is a lot of hidden poverty in the Kingdom, said Hooi. Concrete data is lacking, but it is clear that it is a major problem. The Caribbean Netherlands islands Bonaire, St. Eustatius and Saba have even seen an increase in poverty after they became Dutch public entities in 2010. Poverty is a great challenge in the countries Aruba, Curaçao and St. Maarten with around 45 per cent of the population living on or under the poverty line.