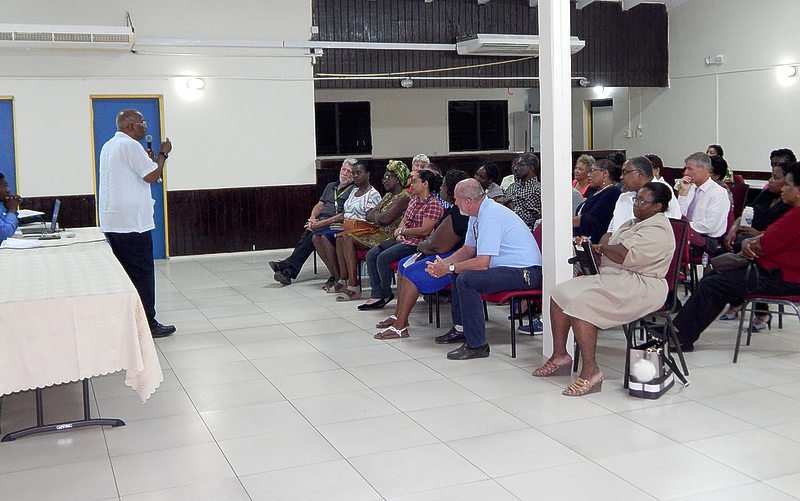 ST. EUSTATIUS–Pension Fund Caribbean Netherlands PCN held an informative meeting Monday for pensioners and (former) contributors to the fund about the recent pension reduction of 3.5 per cent.

PCN’s board members Valdemar Marcha and Roy Hooker spoke on various topics related to the reduction during the meeting, which was held at Mike van Putten Youth Centre.

PCN, which was split up from General Pension Fund Netherlands Antilles APNA after 10-10-10, currently has a shortfall of US $77 million.

The Dutch Government had transferred the pension liabilities of employees in Government, education and healthcare to PCN for which it received a lump sum based on an “obsolete” mortality table, and an actuarial interest rate of four per cent. The Central Bank of the Netherlands DNB has indicated that these principles are insufficiently prudent.

PCN updated the mortality table in 2013, as a result of which the funding ratio declined by approximately 10 per cent.

PCN’s funding ratio declined sharply due to the adjustment of the mortality table and the actuarial interest rate.

PCN has drawn up a short-term and a long-term recovery plan in 2013. The term for the short-term recovery is three years and after that period, PCN must then have a funding ratio of 100 per cent, Marcha and Hooker said. However, due to the further decrease of the interest rate, the funding ratio is still not at the required level.

After discussions with the Ministries of Home Affairs and Kingdom Relations and of Social Affairs and Employment, the Pension Law BES has been adjusted. PCN now has two more years to achieve a funding ratio of 100 per cent, they said.

The two PCN representatives said the fund is doing “everything in its power” to improve the funding ratio. PCN holds the opinion that upon the fund in 2010 the Dutch state had not transferred enough money to the pension fund. PCN has been discussing this shortfall with the Dutch Government for one-and-a-half years. As the Dutch Government has so far not given any substantive response, PCN has issued a summons.

PCN has performed “very well” between 2011 and 2016, the two representatives said. PCN has achieved a higher cumulative return than the Netherlands’ largest pension fund ABP, and PCN has conducted a policy with less risk than ABP over the period concerned, they claimed.

“On a cumulative basis, PCN has realized an outperformance with respect to its own benchmark,” they said.

After the presentation a question-and-answer session was held, during which a few persons wanted to know if it was possible for them to withdraw their membership from PCN. However, Marcha explained to them that they could not withdraw as it was compulsory to join the pension fund.

Others wanted to know if there would still be money in the fund to pay future pensioners. The response they received is that PCN is “working diligently to ensure that everyone receives their pension.”

Asking about the court case filed by PCN against the Dutch government, which is expected to take place in July, Marcha said individual PCN members can join in with the court case. He encouraged PCN members to join the litigation.

One person asked if there is someone looking at the human aspect of the situation pensioners are in, as the prices on the island are very high.

Marcha said unlike Bonaire the labour unions on St. Eustatius were not involved in talks with the local Government. He stated that PCN had met with Statia’s Government and had asked them to get involved with the pending court case. According to Marcha, Government will consider this.