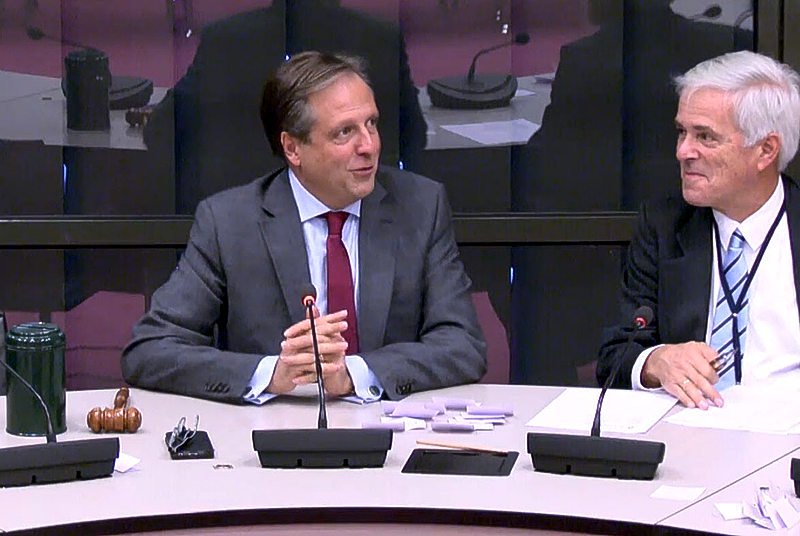 Alexander Pechtold, the new Chairman of the Second Chamber’s Permanent Committee for Kingdom Relations, shortly after his election on Tuesday. At right the Committee’s registrar Tim de Lange.

THE HAGUE–Democratic Party D66 Leader and Member of the Second Chamber of the Dutch Parliament Alexander Pechtold on Tuesday was elected as the new Chairman of Parliament’s Permanent Committee for Kingdom Relations.

With his election, the Kingdom can count on a committed chairman who has a lot of affiliation with the Dutch Caribbean islands and plenty of experience as a former Minister of Kingdom Relations, a position that he held from 2005 to 2006.

Pechtold (51), a Member of Parliament (MP) for almost 11 years, was elected during a special meeting of the Committee for Kingdom Relations on Tuesday, at which time a vice-chairman was also elected in the person of Remco Dijkstra of the liberal democratic VVD party.

Dijkstra (45), who has been an MP for five years, was the only candidate for the position as vice-chairman and was elected with the support of all Committee members present. Pechtold received ten votes in favour and one blank vote.

After the voting was completed, Acting Chairman Paul van Meenen (D66) congratulated both Pechtold and Dijkstra, and handed over the gavel to Pechtold. Van Meenen had acted as chairman for the past seven months after the departure of the former Committee Chairman Jeroen Recourt of the Labour Party PvdA who was not re-elected during the Parliamentary elections in March this year.

Van Meenen said that the past couple of months had been “quite intensive” due to the destruction caused by Hurricane Irma particularly in St. Maarten. Pechtold concurred that the Kingdom had passed through some “turbulent” months. Pechtold told the members of the committee that he was very much looking forward to working together with them.

Asked for a comment in relation to his appointment, Pechtold said that as chairman he hoped to contribute to better relations within the Kingdom. “The islands form an important part of our Kingdom that too often receive (too) little attention. Especially in these times, when the islands are confronted with heavy climate changes, big challenges in government and the reconstruction, it is important that we as Dutch Parliament take our responsibility.”

According to Pechtold, it is important to maintain good contact with the islands in the process of achieving better relations. He said that he looked forward to the visit of the Committee for Kingdom Relations, together with the colleagues of the First Chamber, to the Dutch Caribbean early January 2018 as part of the Inter-Parliamentary Consultation for the Kingdom.