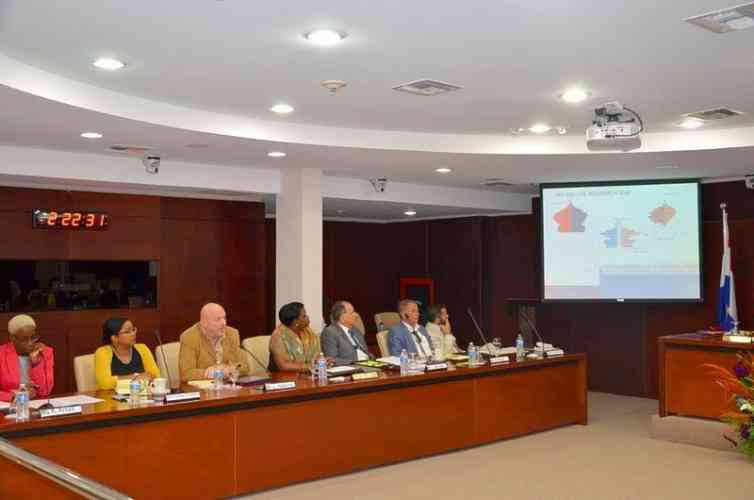 ~ Widow’s pension for ex-spouses to end ~

PHILIPSBURG–Civil servants in St. Maarten will have to work three years longer, up to age 65 from the present age of 62, before they are able to go on pension, after Parliament passes the draft National Ordinance for the Revision of the Pension of Civil Servants.

The details of the draft and the reasons it is necessary were outlined during a meeting of the Central Committee of Parliament on Tuesday. The goal is for the new ordinance to go into effect as of January 1, 2019.

Two fundamental changes to the law are the increasing of the pension age from 62 to 65 and the shifting of the payment system into the fund from an “end pay” system to that of an “average pay system.” In the present end pay system, pension is calculated over the average pay of the worker over the last 24 months of their salary while in the proposed new system, pension will be built up every year based on the worker’s income for that year, which results in their pension being based on an average of their salary for their entire civil service career.

Built into the draft is the possibility for workers to retire at the age of 62 if they want to. However, they will receive a “somewhat reduced pension,” Personnel and Organisation representative Luud Hakkens told Members of Parliament (MPs). He said partners in the Kingdom have made these two fundamental changes and “this is the going system” in the Netherlands, Aruba, the Caribbean Netherlands (Saba, St. Eustatius, Bonaire), and Curaçao, which made the changes about three years ago.

Another change in the draft is a reduction in the percentage paid into the fund by government for civil servants from 25 to 18 per cent. The premiums being paid by civil servants will not be changed. Currently employers contribute 19 per cent to the pension fund and employees contribute 6 per cent of their salary. Also changed is the ending of widow’s pension for ex-spouses, which several MPs said needed to be clarified. The possibility has also been built in for future changes to be made to orphans’ and widows’ pensions as well as the disability pension.

Also built into the draft is a recovery mechanism which will go into effect if the coverage ratio of the pension fund goes below 100 per cent. If this were to occur, the General Pension Fund Administrator APS would be required to come up with mechanisms to restore the credit ratio within five years. If this plan fails, employers and employees will have to make contributions to the fund to restore it.

The draft also includes the possibility for civil servants to buy in extra pension at their expense.

Once the law has been passed and it goes into effect on January 1, civil servants will roll over into the new system simultaneously and the current system will come to an end. Civil servants will retain all of the benefits that they have accrued in the current system up to January 1, 2019. These will go over with them into the new system, and they will continue to build up their pension according to the new rules, Hakkens said.

All persons who roll over into the new system will receive 10 per cent of their already accrued pension rights and will build up further pension according to the new rules.

Hakkens said APS does not meet the minimum requirements of the coverage ratio for the pension fund due to several factors, including the fact that the APS fund started in 2010 (after the dismantling of the former Netherlands Antilles) without an investment portfolio. There also had been a low return on national and international investments at the time due to the financial crisis, the increasing life expectancy meant that more reserves needed to be used, and government was falling behind in its payment to APS.

He said the pension system in St. Maarten is complex. There are two pension plans: one introduced in 1998 and the other, which still exists, is from 1936. All new members went into the 1998 plan, while older member remained in 1938 pension plan, which has different rates and additional rules, etc.

There are also several unfunded benefits such as the guarantee dating back to 1943 whereby government guarantees that pensioners will have a pension of 70 per cent of their last salary. Also, an arrangement was made when the pension age was raised from 55 to 60 in 1996, whereby persons who could not go into the new pension fund were allowed in at a special rate. This cost was to be borne by government.

Government was having difficulties meeting its payment obligations to the pension fund and APS started sounding the alarm that even the payment of the 25 per cent would not be enough to sustain the fund. APS had indicated that premiums should have been at 27 per cent and would have to be increased to 30 per cent eventually to sustain the fund. Hakkens said this had been a disaster waiting to happen as the fund would have been depleted in 17 years if something was not done.

A workgroup was established to tackle this problem. The workgroup included four unions representing workers; representatives of the Finance Ministry, Personnel and Organisation, APS, and the Ministry of Health, Labour and Social Affairs VSA; and an actuary.

The workgroup began meeting in April 2016 and in October 2016, a consensus was reached on the changes that needed to be made. This was tabled in the advisory body handling matters related to civil servants GOA and an agreement was reached in December 2016 and a covenant was formulated.

The Ministers of General Affairs and Finance signed a covenant with the unions and APS in January 2017. It took another year to draft what Hakkens referred to as the “complex legislation” which was presented to MPs on Tuesday.

Several MPs posed questions on the draft, following which the meeting was adjourned to give Minister of General Affairs Leona Romeo-Marlin a chance to gather the answers.