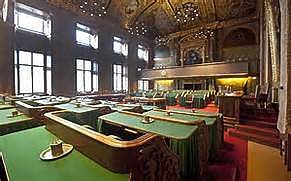 THE HAGUE–The most feasible of the three options to solve the funding shortfall at the Caribbean Netherlands Pension Fund PCN is to lower the payable pension, Dutch Minister of Home Affairs and Kingdom Relations Ronald Plasterk informed the First Chamber of the Dutch Parliament on Tuesday.

The three options are: having the employers, including the public entities Bonaire, St. Eustatius and Saba and the schools on the three islands, deposit additional funds in the PCN; increasing the pension premiums, and reducing the pension allowances.

“There are no more flavours than that,” said Plasterk who noted that the first two options were not feasible as they would entail a very high financial burden for the local governments. He said it was “unavoidable” to lower the pension allowances by 3.5 per cent which the PCN has announced it has little choice than to effectuate this month.

In a letter to the Bonaire labour union USIBO dated April 4, in response to the Bonaire petition against the pension reduction, Plasterk referred to the 3.5 per cent cutback as a “dreadful, but unavoidable step.” He stated that the Dutch Government was “very much aware” of the standard of living of vulnerable groups in the Caribbean Netherlands and the difficult financial situation in which they live.

However, the reduction that the PCN has to apply per April 1 was need in order to structurally restore the pension fund and to create a healthy financial situation. The PCN has already extended the recovery period by two years in 2016, thereby avoiding even greater reductions, stated Plasterk.

Plasterk urged the labour union to grant him time to find acceptable solutions with the other employers and the PCN. He said that this would take some time due to the complexity of the matter. The Bonaire unions stated that they were not prepared to wait and announced industrial action on Wednesday. The unions asked for a deferral of the pension reduction to October this year.

During the meeting with Plasterk on Tuesday, the Senate’s Permanent Committee for Kingdom Relations KOREL had asked about the status of the PCN and the planned pension payment reduction. Several members expressed their concerns about the effects on the pensioners.

“The elderly on the islands already have a very tough time to keep their head above water. How are we going to ensure that these elderly can have a decent life,” said Senator Meta Meijer of the Socialist Party (SP). Plasterk repeated that there were few other options than to reduce the pensions and added that he could not say much about the issue as this matter is now before the Courts.