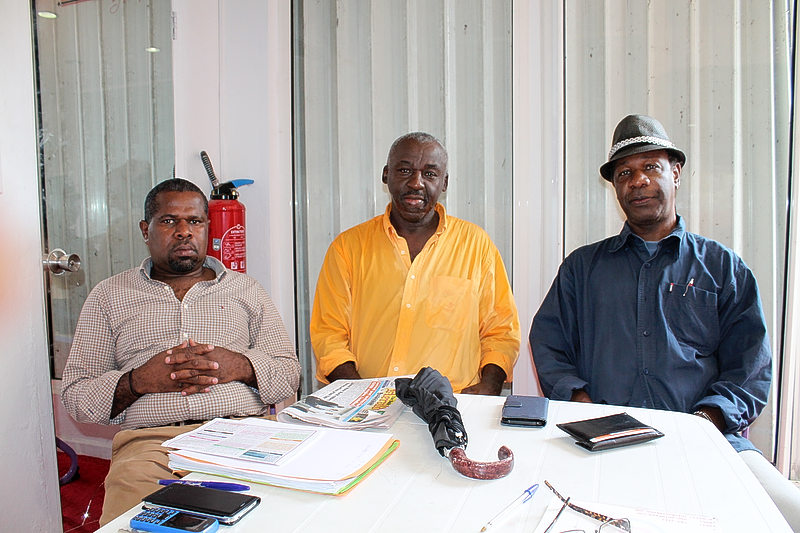 MARIGOT–Members of the Soualiga Grass Roots Movement said Thursday they are calling on supporters to gather outside the courthouse, Marigot, next Thursday, November 24, at 8:30am for the hearing on the Nadika Stephen case.

Nadika is the mother of Kevin Stephen, the young St. Martin entrepreneur who was fined 1,100 euros and handed a two-month suspended prison sentence by the court last year for “outrage and rebellion” during a routine immigration control on June 16, 2015, in Bellevue.

Stephen (37) was on his way by bus at 7:30am to the Port de Plaisance gym when Police aux Frontières (PAF) officers stopped the bus at the Bellevue roundabout to check ID of the occupants.

Stephen did not immediately have his ID to hand [over to PAF – Ed.] and that led to verbal exchanges and escalated to the point when Stephen was handcuffed and taken into custody for most of the day. He later found his ID in his sports bag.

PAF in their report accused Stephen of rebelling and verbally abusing the officers, using foul language and the F-word. Stephen in court denied using bad language and disputed PAF’s version of events.

His mother became unwittingly involved when she rushed to the defence of her son.

“When I heard about it I thought how absurd and ludicrous for just a misdemeanour. The PAF said I went too far in telling them off and that’s why I’m in court,” she said at the time before a postponed hearing on her case.

Asked in a phone call Thursday what she believed the charges against her are, she said: “Uttering racial slurs and spitting on the French passport, which of course I categorically refute. Apparently it’s a criminal charge against me.”

Soualiga Grass Roots Movement President Horace Whit disclosed the movement has been able to secure the services of five key lawyers from Guadeloupe who will arrive next Wednesday to defend her case in court.

Next Thursday is the first continuation of the case since last year; however, it is not known if there will actually be a verdict on that day.

The Movement blames the Kevin Stephen case on “abuse of power” by law enforcement on his and other cases.

“So he’s a St. Martiner on a bus and obviously legal. So then just drop it. It could have been handled so differently and should never have gone to a trial,” insisted Soualiga member X-Rey. “But now what PAF alleges happened, or was said, is not actually what happened or was said. That’s why we have to take this case with Nadika very seriously.”

Whit said the Movement has the impression that Nadika, who is also a member, is being targeted.

“The lawyers we contacted based on the arguments sent to the prosecutor felt that there are a series of discrepancies and decided it is worth taking up our cause. We know that there are quite a lot of people who have had similar experiences with the PAF, particularly in instances of not being able to produce their ID.

“I’m sure they (PAF) are doing their job but there are certain realities in St. Martin society. We are not accustomed, culturally, to walking with ID. The law also gives you the time to produce the ID later. That option could have been used. So what we are saying is that there is this inflexibility in the (PAF’s) behaviour, especially in this case.

“We were there, we saw what happened. Yes voices were raised on both sides but these were young unruly and inexperienced PAF officers who were acting provocatively,” Whit alleges. “Do they have a right to assume everyone on the bus is an illegal immigrant? That’s what they thought on that day.”

X-Rey added immigration controls should be conducted in cooperation with the Territorial Police because they in most cases know who the St. Martiners are.

The lawyers will be holding a press conference on Wednesday, November 23, at 6:00pm in the Chamber of Commerce, Concordia.