Home Local News Persons of the Year: The People of St. Maarten/St. Martin 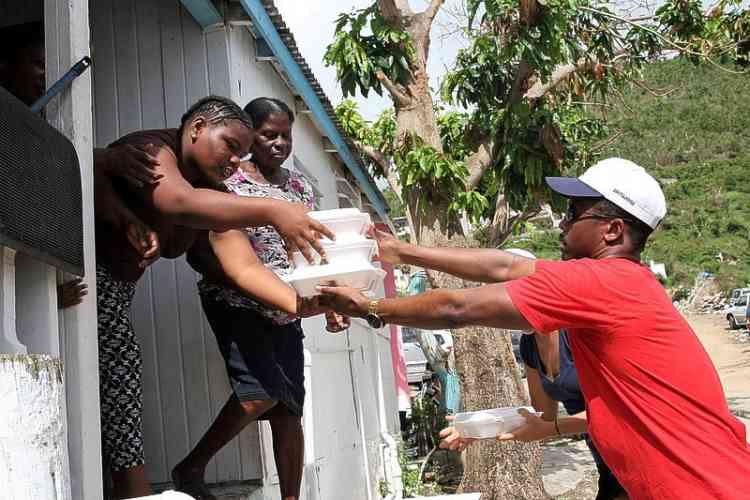 PHILIPSBURG–2017 was by far a challenging year for the people of both sides of “The Friendly Island.” Faiths were tested and tough choices made living conditions abnormal after the passing of monster Hurricane Irma on September 6.
The Daily Herald has chosen the people of St. Maarten/St. Martin as the “Persons of the Year” for 2017. After all, slogans such as “SXM Strong” and “SXM will smile again” are testaments to the resilience the people have shown and continue to demonstrate day in day out.

The good
Before the passing of Hurricane Irma, the countries were looking forward to several projects initiated by their respective governments and both governments hoped for a smooth ending of the hurricane season. However, with an outlook of a possible category 3 hurricane, officials warned the population about preparedness and caution.
It was safe to say that those who were used to customary announcements of caution, decided not to fully prepare for the oncoming hurricane. When the storm strengthened, the day before was when panic started to spread around the island as Irma was on her way.
All residents and visitors were to be off the roads by the 8:00pm curfew on September 5. The curfew would remain in effect until the hurricane had passed and damage to infrastructure had been assessed by the Emergency Operations Centre (EOC).

The bad
All businesses in St. Maarten’s capital of Philipsburg suffered damage from Hurricane Irma’s catastrophic winds and in some cases also from the widespread looting that followed.
“Come look, a generator,” shouted a shirtless man to his fellow looters just hours after monster storm Hurricane Irma devastated St. Maarten/St. Martin. He was pushing a new generator out of the ripped doors of Safe Cargo, one of the island’s main shipping companies.

He was by far not the only opportunist after the devastating hurricane left the island’s shores. Many people converged on supermarkets, food warehouses, liquor depots, furniture stores and electronic equipment stores to cart away as much as they could with absolutely no shame or remorse.

These acts of greed meant that without outside support of food and water, many residents faced severe shortages.

Many of the looters proved they were not looking for essentials. They headed to jewellery stores on Front Street, to the Harley Davidson Store to cart off bikes and the iStore to grab mobile phones even though Internet access was scarce. They hauled away televisions and other electronics.

Police and military officers cracked down on looters and subsequently arrested many persons for looting. Both sides of the island created special task forces to investigate looting incidents and bring those responsible to justice.

Hope
Acts of kindness propelled throughout the community after the passing of the hurricane. Persons risked their lives to rescue their fellow man while some made sure their neighbours were also taken care off.

Let us not forget the remarkable work the only operational radio station did for the community post-Irma. The Laser 101 Storm Watch team worked 24/7 shifts informing and entertaining the population during tough times.
What good would Government have been if it had not had the full support of the civil servants who looked past their own troubles and worked to get the country back fully operational again.

Social organisations worked overtime to also assist with the rebuilding of the island. Irma inflicted incomprehensible damage on the 37-square-mile island, leaving Dutch- and French-side residents and visitors shell-shocked, but thankful for life, and while hundreds left, thousands stayed to weather the storm and rebuild immediately.
Clean-up crews worked day and night to finish cleaning up debris left by the storm. Restoration of residents’ roofs remains an issue to date, but St. Maarten/St. Martin is fortunate enough to show that they were the fastest island to bounce back from monster Hurricane Irma.

SXM Strong
The campaign is a broad initiative organised by different community and social stakeholders on the Dutch and French side and is endorsed by both governments.
The #SXMSTRONG campaign goal is to bring together different social organisations and the business community. It gives them a platform to organise their events and activities as part of the joint rebuilding efforts.

Immediately after Hurricane Irma, many people turned to social media and shared their support, thoughts and prayers by using the hashtag (#) SXMSTRONG. Since then, the hashtag’s popularity has grown on different social media platforms.
The sentiment surrounding the powerful slogan is one of unity, resilience, empowerment and solidarity. The slogan and the underlying message reinforce the determination of the Government of Sint Maarten and its people in their recovery and rebuilding process. #SXMSTRONG inspired the Government of St. Maarten to design a logo.
Governor Eugene Holiday said it best in his post-Irma address: “Amidst the devastation, there has been progress though maintenance of hospital operations, restoring and maintaining public order, emergency relief to districts, partial restoration of water supply, gradual restoration of electricity supply, gradual restoration of voice and data communication, opening up of some food outlets and a number of banks.
“Going forward, St. Maarten will need everyone to join in to rebuild the nation’s infrastructure one day at a time.”