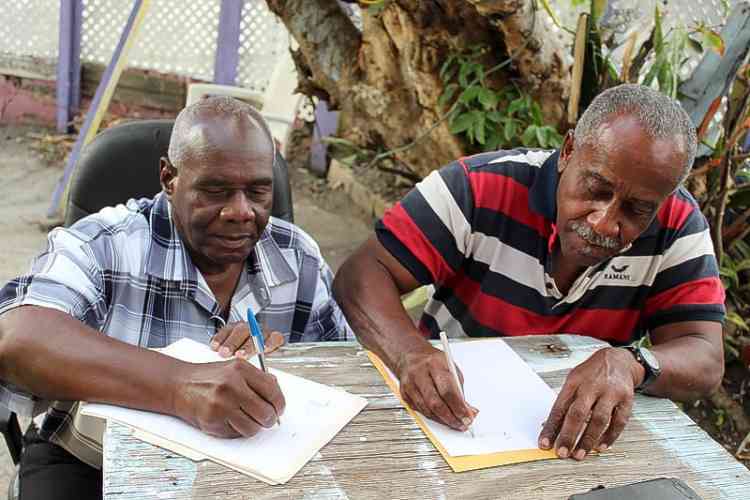 Two of the initiators of the signature drive, Glenn Schmidt (left) and Eddy Spanner, signing the petition.

EUSTATIUS–A petition drive has started recently in St. Eustatius concerning the state of the island since October 10, 2010, and the government take-over in February 2018. The petition is addressed to the government of the Netherlands, the Dutch Parliament’s First and Second Chambers, the Ministry of Home Affairs and Kingdom Relations BZK and other government officials.

The group behind the petition is made up of several dissatisfied residents of Statia who are protesting what is happening on the island since the dissolution of the Netherlands Antilles took effect, and especially since the Dutch government put the duly-elected island government aside and assumed full control of Statia on February 7, 2018.

One of the organisers of the petition, former Commissioner Glenn Schmidt, said they are particularly concerned about the decision to cancel the constitutionally-due Island Council election of March 20, 2019.

“With no date certain when these will be held, we consider [this – Ed.] an affront to the human and democratic rights of the people, which undermines the faith of citizens in the system and process. We, the people, are excluded from the decision-making process…This is not how the process should work in what is still a democratic state and a country of laws, not men. We have rights and we demand these to be respected,” Schmidt said.

Other concerns of the initiators of the petition include the cost of living which they say has increased substantially since 2010.

“Incomes and benefits have not kept pace, resulting in some income groups facing additional hardship. Price control on basic needs and essentials has not been implemented; the drastic increase in the rates for government lease land saw cost multiplied; promises to regulate the monies owed to civil servants were only partially complied with and no indication has been given when this process will be finalized,” the petitioners say.

“Roads on the island continue to deteriorate and there is no comprehensive plan and budget to address all the construction and repairs needed. Complaints about the service of health insurance ZVK are not being addressed sufficiently for clients, and many problems have been questioned for many years, such as the late payment of travel allowances, missed appointments with specialists, and more.

The increase of the old-age pension for single pensioners has been delayed until 2020, thereby prolonging the suffering of this group. Poverty alleviation continues to be talked about but there is no comprehensive plan to tackle this, and end it forever. Despite repeated calls by the Second Chamber, the government refuses to establish a social minimum for the island, which in turn prevents adequate responses to address poverty,” said Schmidt in mentioning more grievances.

He said Central Bureau for Statistics (CBS) regularly publishes figures on “balance of payments” and the trade deficit of Statia. “But we, the people, have been asking since 2010 for regular reports on taxes collected on the island. To this day this has not been forthcoming, but for one exception, and no plans have been announced by the interim government to attract foreign investors to give new impulses to the economy.”

Schmidt stated that the list is certainly not exhaustive, but rather a “sampling” of the issues that affect people and businesses in their daily lives in Statia. “There are other problems prevalent on the island, but this was a sample of some of the issues that are not addressed by those in official functions.

The petition drive is calling for immediate action to address these concerns and others “for the brighter future of the island.”