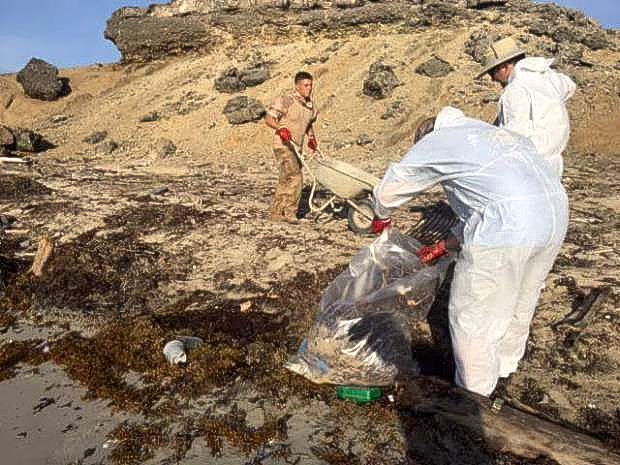 The discussions were initiated by the Ministry of Energy, Energy Industries and PDVSA following a visit to the South American country by a Petrotrin team on May 24.

“We note that this incident has attracted a high level of public interest and concern, and wish to advise that we are also keeping abreast of all reports and developments attributed to the April 23 incident,” Petrotrin said in a media release. “At this time, technical discussions are continuing with the key parties as a precursor to any conclusions and consequential action to be taken.”

Meanwhile, oil has reached the Dutch Caribbean islands of Bonaire and Curaçao. Fishermen and Friends of the Sea (FFOS) member Gary Aboud, on his Facebook page, posted several photos of volunteers engaged in clean-up activities there. He wrote that “oil clumps/tar” had washed ashore on the coastal areas of Sorobon and the Willemstoren, east of Bonaire.

“The Government of Bonaire has begun aerial monitoring to determine the location of the oil drifting in the sea. Curaçao and Aruba, and representatives of the Dutch Ministry of Infrastructure & Environment have made a collaborated effort in dealing with this environmental disaster and are expecting more oil clumps to wash ashore,” Aboud said.

“The salt in the sea water has turned most of the oil into tar, so that it cannot easily be detected by air. It will be difficult to determine if more oil is indeed on its way to Bonaire.”

He also asked: “Based on Tank 70 capacity of 150,000 barrels and Minister (Franklin) Khan’s statement in Parliament that Tank 70 had 12,853 barrels after the leakage was contained, FFOS have estimated as much as 137,147 barrels may have escaped. Can 300 barrels really spread to one mile long by five miles wide in the Gulf of Paria, and affect Trinidad’s west coasts, Guiria in Venezuela, Margarita, Los Roques Islands and now Bonaire?”