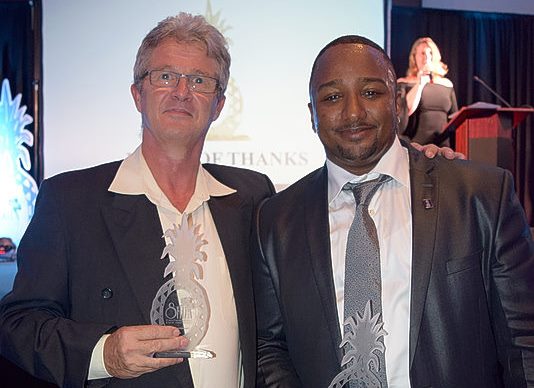 Both mentor and mentee were honoured at the 11th Annual SHTA Crystal Pineapple Awards held at Sonesta Maho Beach Resort and Casino. Peut was among a number of special awardees chosen by the board of SHTA. Laurence was nominated and voted on by the community.

Peut, in his acceptance speech, said he was honoured to be singled out and delighted to see some of his old students as nominees. He was chosen by SHTA for his continued commitment to the culinary arts as well as a steady coach of the island’s gold medal-winning culinary team. Peut promised the team will bring home more medals from the Taste of the Caribbean next year.

The dedicated teacher encouraged the community to support Sundial School students, many of whom were at the dinner and awards ceremony gaining experience. One way to support is attending the upcoming Christmas lunches at the school’s Le Source Restaurant on December 8 and 15. Reservations can be made via the school. “This future is here and they need all the help we can give them,” he said.

Holding up his Crystal Pineapple, Laurence said he dedicated it to Peut for teaching him all he needed to know about the restaurant and service industry. His success is a clear reflection of the talent from Sundial School. His schooling under the tutelage of Peut has taught him, Laurence said, “you don’t have to go away to learn” because learning can happen right at home.

Danny Ramchandani was chosen as Businessman of the Year by the board of SHTA for his tireless community effort and support and for seeing beyond his business interest to the greater good for the country. Receiving his Crystal Pineapple, a very surprised Ramchandani joked he got one pineapple for the 40 real ones he donated for the event’s centrepieces. He responded to his recognition by gifting each Sundial student who worked at the gala a US $100 voucher to shop at his supermarkets.

The Association recognised the work of the White and Yellow Cross Foundation with the Commitment to the Community Award and The Maho Group, owners of the Sonesta Resorts, as SHTA’s Most Supportive Member.

SHTA board member Ricardo Perez was presented with the first ever Golden Coconut by SHTA President Lorraine Talmi for his role as the most valuable player in the organisation.

Luis Santos of International Liquors and Tobacco was named Employee of the Year (Trade).

Lisa Ann-Marie Brown-McKay of NAGICO Insurances received the Crystal Pineapple as Manager of the Year (Trade).

Nate “the Great” Wyatt got the first ever Crystal Pineapple as Taxi Driver of the Year (Trade).

Employee of the Year (accommodations) went to Gregory Casseus of Sonesta Great Bay Beach Resort, Casino and Spa. He was double delighted with his pineapple as it meant he has followed in his father’s footsteps. His father won a Crystal Pineapple last year.

The Crystal Pineapple for Salesperson of the Year was taken home by Carlo Melo of Sonesta Maho Beach Resort and Casino.

Entertainer of the Year was captured by Charity Dunker of 98.1 Pearl FM.

In the bar and restaurant category, the Crystal Pineapple for Employee of the Year went to Juliana Panthier of Top Carrot.

The title of Bartender of the Year went to Laura Frederick of Simpson Bay Resort and Marina.

The winners of the Crystal Pineapple Awards, not selected by the SHTA board, were based on nomination and popular vote by the community.

The awards ceremony was also a vehicle to introduce SHTA’s newest project aimed at rebranding the country to increase destination awareness overseas. Three pilot videos and linked press advertisements were shown to attendees who were also asked to select their best slogans for the country. The videos and ads were put together by what SHTA described as “St. Maarten creatives.” The team of volunteers comprised Loic Bryan, Ronny Busby, Eduoard de Haay and Arun Jagtiani.