Home Headlines & Top Stories PFP pledges to improve ‘quality of life for all’ in campaign manifesto... 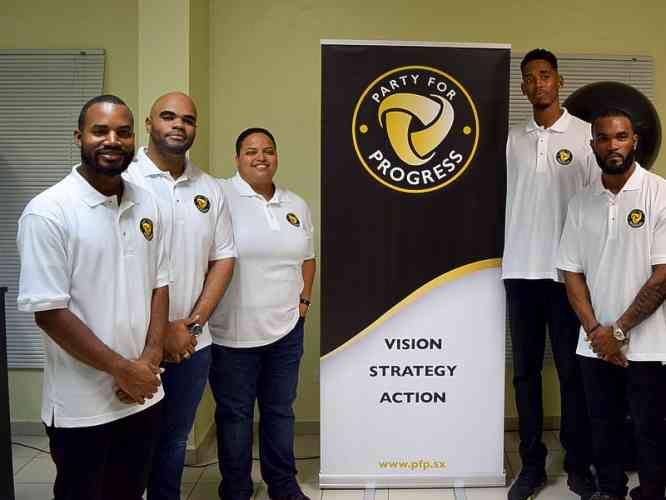 PHILIPSBURG–New political group Party for Progress (PFP) has said in its manifesto, which was launched on Nomination Day, November 21, that it will work towards “improving quality of life for all.”

The document “is not a wish-list or promissory note,” said party leader Melissa Gumbs in the manifesto. Instead, it is “a guide to navigate what we see as a difficult road ahead.”

According to the manifesto, it centres on “two critical nation-building components” – people and partnership. It is structured around five sections: “Financial Stability at All Levels”, “Safer and Better Infrastructure, Waste Management and Environment”, “Dynamic and Progressive Education”, “Energy That Makes Sense”, and “A Healthier, Stronger St. Maarten”.

Each section is sub-divided into critical concerns “which require immediate attention and decisions to provide relief to many people living in St. Maarten” and longer-term objectives which the party believes are “a solid strategy for creating an environment where there is constructive conversation, progressive leadership and collaborative effort.”

Under financial stability the party introduces several immediate measures to address the cost of living. One of these measures is amending the Minimum Wage Ordinance to allow a mandatory annual indexation of the minimum wage.

“St. Maarten currently has the highest cost of living compared to the [other – Ed.] Dutch Caribbean islands … yet it has the lowest minimum wage. Simply increasing minimum wage does not address the root issues impacting our purchasing power,” according to the manifesto.

In this light, PFP says it would also work to expand the list of government-controlled items, adding more food products and feminine hygiene-related goods, and would seek to cut the profit tax from 30 per cent to 15 per cent.

In the longer term, PFP says it would conduct a feasibility study aimed at eliminating income tax. Instead, it would see the private sector transition to a payroll tax. The party also says it would advocate for structured tax breaks for small businesses.

Under infrastructure and waste management, PFP says it would provide incentives for electric cars by waiving the road tax on these vehicles for an introductory period “to encourage a shift in thinking towards energy-efficient alternatives.”

PFP highlighted special-needs education in its manifesto. To strengthen this sector, the party wants to see mandatory enforcement of individualised education programmes (IEPs), establishment of personal education assistants (PEAs) for each special-needs student, and having sensory corners and/or rooms in every school for those students who are over-/underwhelmed.

PFP also said teachers should attend yearly continued professional development (CPD) courses “to ensure that they are able to provide and maintain the best possible learning environment for their students and themselves.”

Under its plans for energy, PFP seeks to expand utilities company GEBE’s concession to allow the company to invest in infrastructural programmes and scholarship schemes. The party also wants to convert GEBE’s generators from using heavy fuel oil (HFO) to liquefied petroleum gas (LPG). “Converting the engines at GEBE from HFO to LPG will cut air pollution and will lead to substantially lowered electricity and fuel charges.”

PFP would also like to research possibilities of energy collaboration with St. Eustatius and Saba, particularly in solar energy. The party proposed an “80/20 Solar Energy Rule” which would “decrease St. Maarten’s fuel usage at GEBE, creating an environment whereby 20 per cent of our energy comes from solar [power] and 80 per cent from [petroleum] fuel within five years.” Additionally, “every two years thereafter, fuel usage will be decreased by five per cent with the addition of solar panels.”

In its manifesto, the party also spoke about reviving a District Basketball League and an Interscholastic Baseball League.

In Parliament, PFP said it would work towards reviewing and updating St. Maarten’s laws.

“In the transition of 10-10-10, much of our legislation was transferred over from the Netherlands Antilles constellation. This has led to the creation and continuation of legislative loopholes within the laws of the country. These legal clashes exist in our penal code, civil code and, as recent history brought to light, our Constitution and Electoral Law. PFP plans to initiate a period of ‘legislative repair’ to close these gaps and conduct an overall alignment of the laws of the country,” said the party.

“PFP firmly believes that the destiny of Country St. Maarten must be placed where it should have always rested: in the hands of her people. This is our way of ensuring that your input is not just considered, but applied to the continued vision of ‘improving quality of life for all’ in St. Maarten,” concluded PFP’s manifesto.

Saba will not open its borders to St. Maarten | THE DAILY HERALD

July 3, 2020
0
SABA--Saba will not open its borders to St. Maarten for visitors and leisure travel, Island Governor Jonathan Johnson said early Thursday evening.While some measures in combating the coronavirus COVID-19 pandemic and some “small risks” have been introduced, such as...
Read more
Headlines & Top Stories

July 3, 2020
0
The vehicles involved in the head-on collision on Wednesday evening.COLE BAY--Five persons, including a two-year-old, were injured when an overtaking black pickup truck collided...
Local News

July 3, 2020
0
The vehicles involved in the head-on collision on Wednesday evening.COLE BAY--Five persons, including a two-year-old, were injured when an overtaking black pickup truck collided...