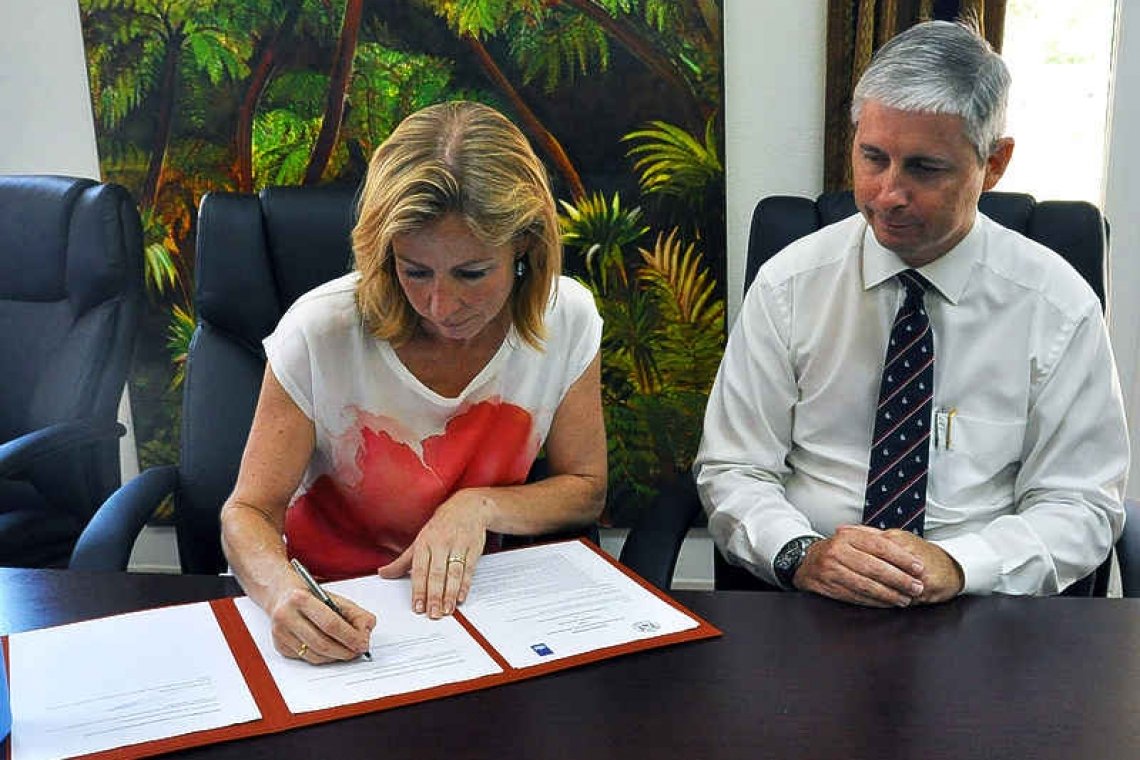 SABA–The Public Entity Saba is preparing the phased implementation of a ban on single-use plastic products in 2021. Legislation to this effect has been drafted and sent to the Island Council for deliberation. An official public consultation on the draft ordinance has also been initiated. The ban will start with a prohibition on plastic carrier bags per January 1, 2021.Based on an island-wide consultation through interviews, a questionnaire and a think tank, the government has worked on a draft ordinance in the past half year to regulate the gradual prohibition of single-use plastics.

The ordinance will prohibit the provision of a number of frequently used and/or easily replaceable types of single-use plastics, namely carrier bags, food containers, cups, plates, cutlery, straws, stirrers, cotton swabs, fresh produce bags and confetti.The plan is to start the plastic ban with carrier bags per January 1, 2021. This means that supermarkets, other stores and restaurants, but also other sellers, including booth holders at events or markets, and service providers may not provide plastic bags to their customers as of that date.If environmentally friendly, single-use alternatives for plastic bags may be provided against payment of a fee by customers.

This is done to encourage people to bring re-usable bags, but also to help business owners save cost.Single-use plastic cups, cutlery, plates, straws, stirrers and confetti may be prohibited by May 1, 2021. Food containers are the last product to be banned, on October 1, 2021.The reason for this is that similar quality alternatives are harder to find. Restaurant owners need sufficient time to test different products and find a proper solution before fully eliminating the plastic and Styrofoam containers.

The idea to introduce the plastics ban in phases is based on the notion that some products are easier to phase out or to be replaced than others. A longer phase-out time will be implemented for products that are more difficult to replace by an eco-friendly version, especially in the case of food containers. The ban targets all types of products that are produced for single use and made out of any type of plastic. This includes Styrofoam, but also plant-based materials that were chemically altered to create plastics such as “biodegradable” plastics that only decompose in a commercial composting unit, which Saba does not have. The environmental damage of these bioplastics is similar to that of regular plastics, if not processed properly.The ban also includes types of products that are non-recyclable or difficult to recycle because they are made of inferior plastics that cannot be exported off the island for processing abroad, and, therefore, end up in the solid waste burner on Saba.

The ordinance gives the possibility to request an exemption to the ban when certain banned single-use plastics are necessary for medical purposes or in other contexts where hygiene cannot be sufficiently ensured otherwise.To guarantee as much as possible that the exemption only takes place in situations where there is no other option than using single-use plastics, conditions may apply to exemptions granted and these may be valid only temporarily.

The public entity Saba has the aim to reduce littering and burning of solid waste. On September 18, 2018, the Island Council unanimously adopted a motion urging for the implementation of a single-use plastics ban.The Ministry of Infrastructure and Water Management supported this initiative by signing a Letter of Intent with the public entity on July 15, 2019.Main stakeholders were consulted on a single-use plastics ban during the process, and an island-wide consultation was done via a questionnaire, which received more than 200 responses.A think tank was set up to provide further input for the contents of a ban. Together with the ministry, an ordinance was drafted for the reduction of the use of plastics. The phasing out of single-use plastic water bottles at the schools has already been initiated.

Other (future) initiatives in relation to this ban and to reducing the use of plastics in general are setting up a local plastic-recycling workplace, which should be operational by the end of the year; signing a covenant with organizations on the island to terminate the use of balloons; and organizing contests at the schools.A poster contest was already held at a primary school, while a video contest at the secondary school should take place later this year.The water-bottling plant, scheduled to be ready before the end of the year, will also contribute to the reduction of single-use plastics on Saba. Consultations so far have shown that there is broad community support for a single-use plastics ban. The official public consultation on the draft ordinance will take place until August 20. Responses can be sent to This email address is being protected from spambots. You need JavaScript enabled to view it..