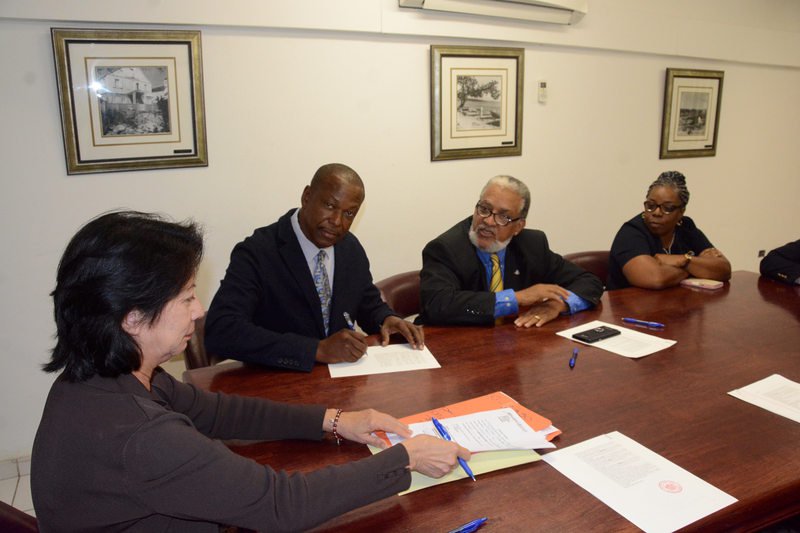 PHILIPSBURG–A group of professionals and business persons, who came together last year to form a group called the Philipsburg Promotional Board Foundation to help revitalise Philipsburg at night and grow the capital’s day-time economy, officially incorporated their articles of incorporation at Tjon Ajong and Associates SXM Notary on Monday.

The purpose of the foundation is to foster partnership and relationship with government authorities, non-governmental organisations, police force and investors to strategize ideas in resolving issues with the improvement of the overall environment of Philipsburg, such as stimulation of the day-economy and to regenerate the night-economy in the areas of bars, nightclubs, restaurants, casinos and churches amongst others.

The foundation also hopes to work with stakeholders to address issues such as faulty street lights, security issues and pavements in Philipsburg in securing the safety of the residents and tourists. It also hopes to create a hospitality and branding committee which will be responsible for creating concepts and programmes that will uplift the general impression of Philipsburg as an ideal place to shop and to be entertained as well as to enlighten visitors with directions.

The group has been meeting monthly since November 2016 and has already met with several stakeholders in the community such as Minister of Finance Richard Gibson Sr., St. Maarten Chamber of Commerce and Industry, a business group from Philipsburg, several restaurants in Philipsburg and recently with the Vice President of the St. Maarten Council of Churches.

“As our programme is to include all stakeholders to participate in regenerating Philipsburg’s night-time economy and growing the day-time economy, we intend to continue to meet several enterprises, non-governmental organisations and the various government ministries and entities,” Davis told The Daily Herald on Monday. “We plan to meet the goals of the board through the functioning of six active committees, which will comprise of various persons from the business community.”

Davis had said earlier that the country’s capital currently does not have a night-time economy and the day-time economy is on the decline, hence the need to give some attention to the Philipsburg area is now more important than ever.

“I have been in Philipsburg for 38 years as a property manager and seven years as a restaurateur and I know Philipsburg. I even remember riding my tricycle on the Pondfill (Walter Nisbeth Road) before it was developed,” Davis had told this newspaper earlier. “Philipsburg may not be glamorous, but as our capital, we need to get the basics right. Employees, visitors, customers and residents should all feel welcome, safe and secure when they are in the capital centre.”

Davis had said at the time that whether addressing issues such as cleanliness, faulty street lights, security issues and pavements or having guides to help visitors with directions, steps need to be taken to create a modern capital that visitors and residents can enjoy.

“The Philipsburg Promotional Board’s aim is to motivate and excite stakeholders and work with partners, whether the merchants, restaurant owners, taxi associations, residents, pastors, the police, authorities and non-government organisations,” Davis had said.

The foundation urges the public to like its Facebook page and to write suggestions and ideas for the re-branding of Philipsburg.