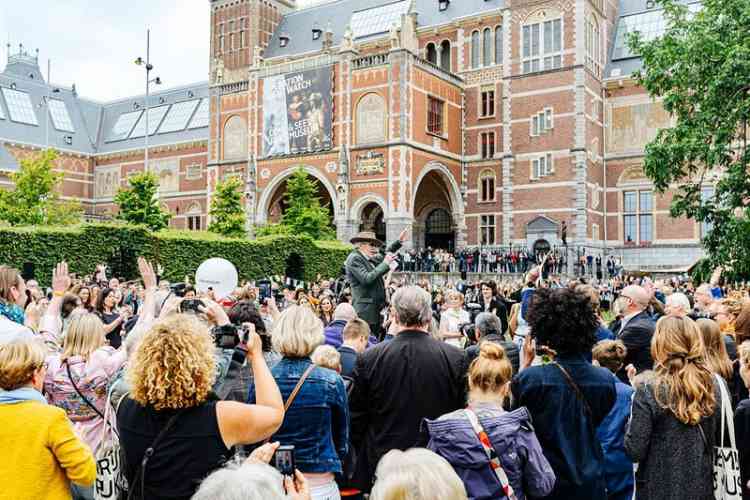 The Rijksmuseum celebrated Rembrandt’s 413th birthday on Monday together with 700 artists featuring in the “Long Live Rembrandt” exhibition, which opened at the museum that same day. (Rijksmuseum photo).

AMSTERDAM–Finding people at weddings and markets, and even scooting past them in the street, Dutch photographer Julius Rooymans has created a replica of Rembrandt’s masterpiece “The Night Watch.” In a project taking eight months, the photographer sourced modern Dutch people with the perfect historic beards and faces and recreated helmets and artefacts with the help of a 3D printer and skilled costume makers to produce “NachtWacht360.”

His photograph replicates the famous Night Watch – considered Rembrandt’s most ambitious artwork and a national treasure – and on the reverse he uses the same models to reveal uglier truths about Rembrandt’s 17th century life.

“He translated reality into art, and we have translated art into reality,” said Rooymans, whose work was created in cooperation with fashion designer Hans Ubbink and went on display at the Rijksmuseum in Amsterdam on Monday.

“The back [side of the painting – Ed.] is like the background of Rembrandt, who had a hard life, even though he was an artist. His wife died, he went bankrupt, life was precarious and the position of women was far from ideal,” Rooymans explained.

He has recreated a fuller image of the Night Watch, which lost a large strip on its left side when it was moved into the town hall – now the Royal Palace on Dam square – and did not fit through the doors.

His version includes three new models, based on a small painting of the original Night Watch, and is also somewhat lighter because curators believe the painting has darkened after being varnished multiple times.

“It’s such an iconic work, [it is on display] on coffee cups, bags … it isn’t just a painting anymore,” Rooymans told website DutchNews.nl.

“What he did was the Facebook of the era, the polished face. We wanted to tell a story of the time, a deeper story of poverty,” he said. Therefore, his verso side of the painting includes rats, shattered glass and women in a madhouse.

The project is one of 575 artworks on display at the exhibition “Long Live Rembrandt,” which opened on Rembrandt’s birthday on Monday, July 15, and will be running until September 15, in the Rijksmuseum.

There, meanwhile, Rembrandt’s iconic representation of the defenders of Amsterdam is currently being restored in a giant glass box.

Rooymans’ and Ubbink’s project is a gigantic effort which also sheds light on the mastery of the original, according to head of paintings and sculpture at the Rijksmuseum Pieter Roelofs.

“This is a beautiful project on which Julius and Hans worked carefully and accurately,” Roelofs told DutchNews.nl. “From the costumes to the metalwork, everything is as true to life as possible. Only by looking and by reproducing it can you see how amazingly well the Night Watch actually works. The Night Watch was originally larger, so it was even better that they reproduced this too.”

Rijksmuseum’s general director Taco Dibbits said Long Live Rembrandt shows how much the work still resonates. “We asked the public to be inspired by Rembrandt and thousands of people sent in something. Football clubs or police squads have re-enacted the Night Watch. It’s great to see that it is a painting that’s so alive amongst the public.” In total, 700 artists feature in the Long Live Rembrandt exhibition.