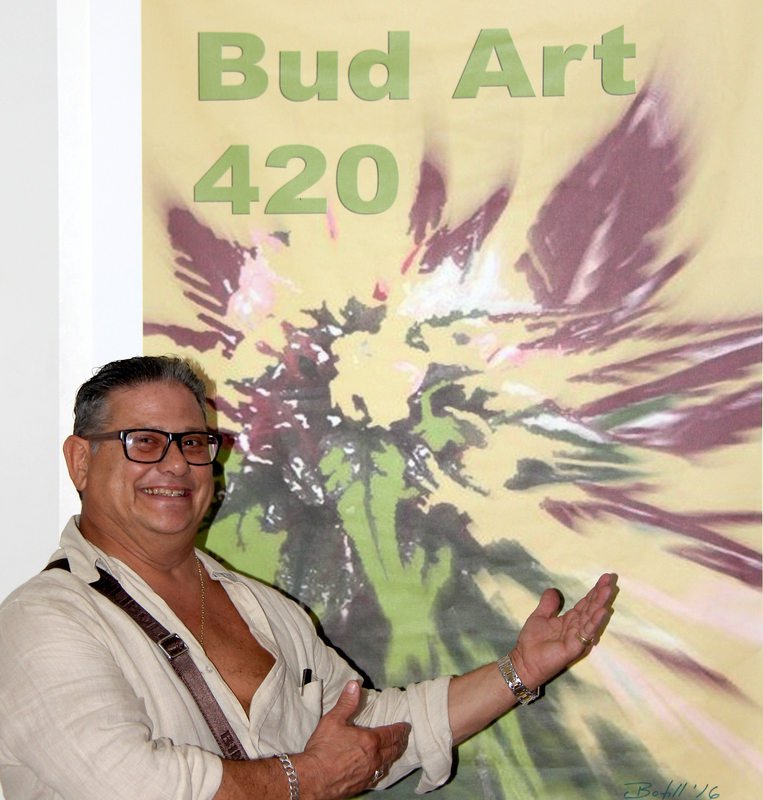 SIMPSON BAY–Photographer Julio A. Bofill launched his exhibition of so-called “photographics” Monday evening at Q Lounge in Simpson Bay. At first sight the billiard lounge on the second floor of the McDonald’s building may not be a place immediately associated with art, but the artist’s works – a mix of photography, graphics and mixed media – blend well with the lounge’s interior.

Dubbed “Bud Art 420” the show consists of photographic images of marijuana leaves in different forms, styles, colours and sizes. A video show of Bofill’s photographs is testimony to where the artist found his inspiration, namely in the so-called “Green Rush.”
Since medical marijuana in the United States has become legal in 20 states, with legislation pending in 13 others, the beneficial workings of the plant has become a US $1.5 billion a year industry, which is expected to triple in just a few years. With legal cannabis being one of the world’s fastest growing market sectors, investors are seeing green.
The colours captured in the show are also predominantly green in symbolizing the pigments found in plants, and the yellow of the sun. “As the season changes those colours take new tonalities and tend to shift to earth tones. This is the essence of this exhibition,” Bofill explained.
The pieces on display are for sale, but can also be customized to the owner’s personal taste, as well as in colours as in sizes. All images are unique due to the (plant) materials that are used and the “hands-on-art” manipulation. The art work is shot, printed and framed in acid-free material for long-lasting viewing pleasure.
Cuban-born Bofill holds a degree in Commercial Photography from La Guardia Community College in New York and a degree in Studio Art from New York University. His photo images have been published in various international publications in the entertainment field. His art has also been shown in many galleries in New York and at the New York Historical Society Museum.
His work started focusing on the fashion industry by photographing models and artistes. He worked with many renowned Latin performers, including Tito Puente, Celia Cruz, Eddie Palmieri and Jose Feliciano.
After being the international promotional director and graphic artist for European-based Envidia Records in the United States, Bofill became director and curator for SONO Art Gallery and opened Infinity Photo Studio in the heart of Broadway in New York City.
Bofill came to St. Maarten for vacation in December 2005. “And I never left,” he said during opening night. The show will be open for viewing during Q Lounge’s regular opening hours: Tuesday to Friday from 5:00pm to 2:00am, Saturday from 1:00pm to 2:00am, and Sunday from 1:00pm to midnight. The artist himself may be found down the street at Avantika Fresh Thai Cuisine and Lounge where he’s employed as a bar keeper.