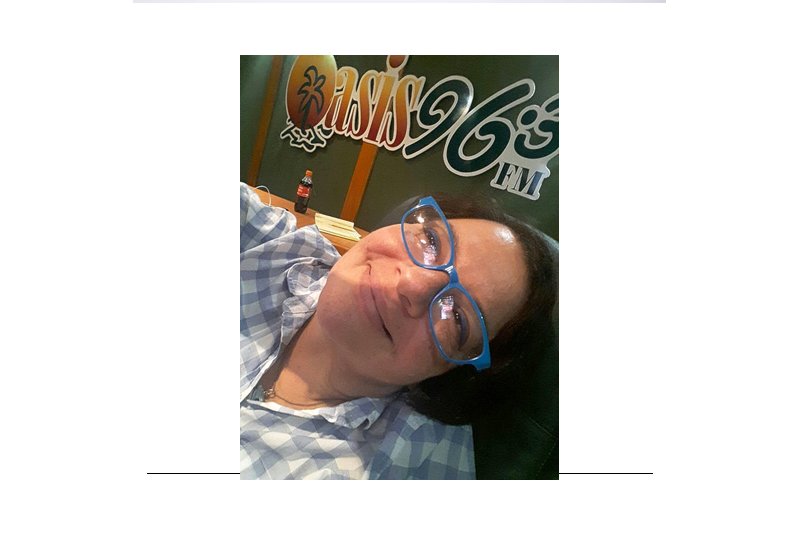 PHILIPSBURG–After twenty years as the welcoming voice on Philipsburg Broadcasting’s Oasis 96.3 FM, on-air personality Phyllis Meit will be closing this chapter of her life and embarking on “a new adventure” in her native Curaçao.

Meit (54), who has more than 30 years’ experience in radio in St. Maarten, will be leaving the country today, Friday, for her birthland, where she plans to see where life takes her. Her last day on Oasis 96.3FM was Friday, October 13.
Meit, who has been living in St. Maarten since her early 20s, says while the “bittersweet” decision to leave was not a direct result of Hurricane Irma, the passage of the major storm helped her accelerate her decision to explore another challenge.
“It wasn’t really Irma. For several years now I was thinking of making a change. I needed new challenges and, although I loved Oasis and loved my job, I had to challenge myself to do something new and when Irma came along and smashed up everything, it moved things up. I felt that I might as well make the move now,” Meit told The Daily Herald.
Meit sustained a lot of personal damage from Irma as several windows and doors of her residence blew out during the storm and many of her possessions were destroyed. She was forced to live in her studio at Oasis for several days until she relocated and stayed with a relative.

Earlier days
Meit always loved radio and as a young child she dreamed of working in this field when she was older. Her parents moved to St. Maarten from Curaçao in the late 1970s. Meit vacationed in St. Maarten many times before relocating here in 1985 after college.
When she moved here, her mother encouraged her to participate in an audition at PJD2 for a job. She auditioned to be part of the station’s news team in the ’80s and she got the job. She remained at PJD2 for several years until taking a break to go to Canada to study linguistics and translation.
When she returned to St. Maarten, her former PJD2 Station Manager Eddy Williams had opened his own radio station – Great Bay Broadcasting Corporation (GBBC) – and she joined him there in 1993. She was part of the news team and she also produced her own radio show, commercials and was an on-air talent.
She remained at GBBC until 1997, when she accepted a new challenge by joining the Philipsburg Broadcasting Service family on February 10 of that year. She remained at Philipsburg Broadcasting for two rewarding decades, until last week Friday, when she hosted her last show.
At Philipsburg Broadcasting, she started off on Laser 101 and joined Oasis 96.3FM soon after when that station opened. She served as Programme Director. In 1999 she started the programme “Oasis Oldies,” which had been the brainchild of her boss Francis Carty. Her show grew in popularity and was loved by listeners who enjoyed classic and oldies music. The programme ran Monday to Friday, 10:00am to 1:00pm. “Every day was a different musical era.”
In addition to Oasis Oldies, Meit also did production, scriptwriting, voicing commercials and, now and again, she also sold air time.
“But my main thing was being on air and producing commercials. I was also part of the Storm Watch Team on Laser 101 and whenever there was a hurricane, we jumped into action to cover storms and hurricanes, including Hurricanes Irma and Maria. I loved my job on Oasis and being part of the family there. It was my dream job,” she said.
She also enjoyed doing projects associated with her job such as the giveaways for the Curaçao North Sea Jazz Festival every year; hosting several Solid Gold fun costume parties where persons attend dressed in hippie ’60s and ’70s attire; karaoke nights and the Oasis Idol events which were held at Mark’s Place.
“My overall experience was very nice,” she said. “I always had a love for radio in general, so no matter what station I worked at in radio, I felt very comfortable entertaining people, but I really found my niche working at Oasis 96.3 because I connected with the music and with the people who were lovers of classic and oldies music.”
She spent her last few days on radio preparing her listeners for her departure. “I didn’t want to dwell on anything too sad. I am sad myself that I will no longer be on Oasis 96.3 because I was Oasis. While there had been few on air personalities; I was the main person there. It was my baby,” she said.
She does not yet have a job in Curaçao, but plans to see where life takes her and she looks forward to her new adventure in Curaçao. “I know that most people would not take a leap like this without having a job and ideally I would like to stay in the radio business, but I will see where life takes me. I am looking forward to my new adventure,” she said.
She thanked all the radio stations at which she has worked, including PJD2, its owner Don Hughes and all her former colleagues; GBBC and Eddy Williams; all her colleagues at Philipsburg Broadcasting, including her employers Francis and Glen Carty; her colleagues at Laser 101, Oasis 96.3, Tropixx 105.5 and Mix 94.7FM; and all the listeners who followed her on air, particularly those who tuned in to Oasis 96.3. She said it was also an honour being on the station’s Storm Watch Team.
Meit has not given up on St. Maarten and plans to return to visit when she can. “It is bittersweet, because I lived here a long time, but I am taking leap of faith and trying something else,” she said.