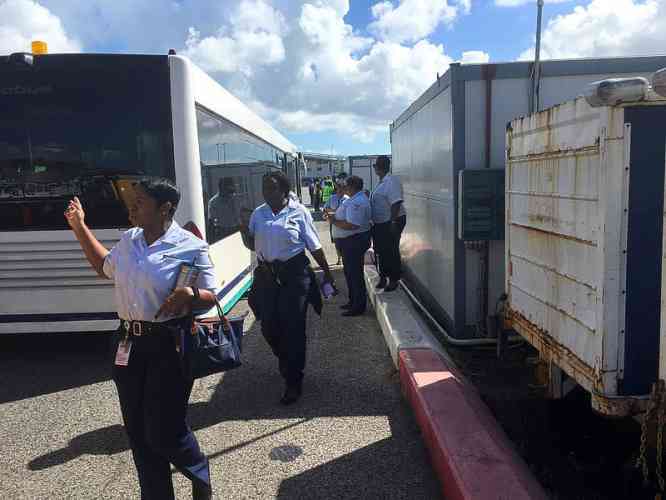 The airport community and passengers vacating the airport following the general evacuation announcement.

AIRPORT–Princess Juliana International Airport (PJIA) conducted its annual emergency evacuation drill on Wednesday. Following the activation of the fire alarm system, both passengers and the airport community were instructed to evacuate the airport at exactly 9:02am.

This procedure was part of the airport’s emergency evacuation drill exercise during which everyone successfully vacated the terminal building on the landside and airside. Leading the project was the Rescue and Firefighting Department (RFF). The objective of the exercise was to test the quality of PJIA’s Package One Evacuation Plan and to evaluate the processes during an evacuation.

According to RFF Chief Manilo Penijn, “The exercise was executed to test the specific functions relating to the emergency response capabilities of Princess Juliana International Airport emergency preparedness. The management levels which were tested included the strategic, tactical and operational.

“It is also a requirement in our Aerodrome Manual to perform an emergency evacuation exercise twice a year,” stated Penijn.

The emergency evacuation drill was called off at 9:21am, when normal operations were restored.