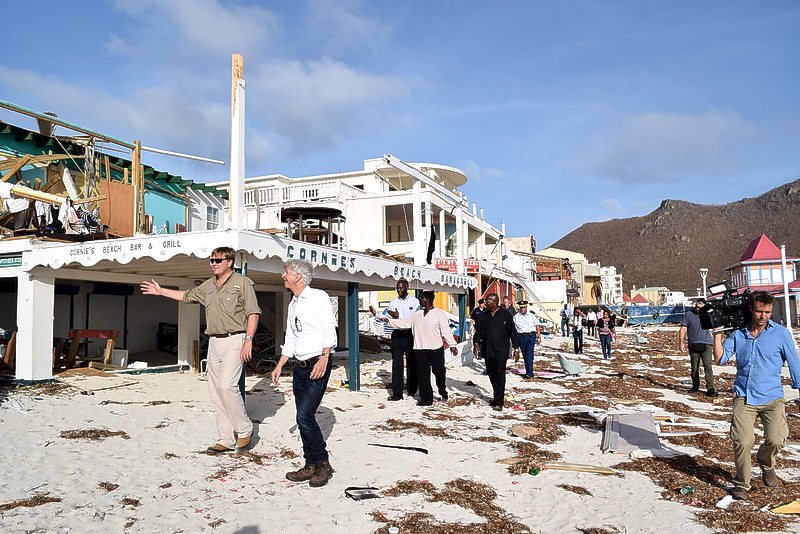 THE HAGUE–Priorities in the next phase after the emergency relief for St. Maarten are the restoring of vital infrastructure such as the airport, harbour, prison, water pipes, homes, hospital, doctor’s offices, pharmacies and schools. The functioning of distribution points will be further improved.

Dutch caretaker Minister of Home Affairs and Kingdom Relations Ronald Plasterk stated this in a letter to the Second Chamber of the Dutch Parliament on Monday. In the five-page letter, he gave an update on the Dutch input as a result of Hurricane Irma and the immense destruction that it caused. He also provided information on the public order and safety situation.

The temporary Ministerial Committee, approved by the Dutch Council of Ministers last Friday, has the task to determine the nature and prioritisation of the contribution of the Dutch Government to the reconstruction, the role of the Netherlands, the European Union (EU) and other international organisations, and the manner of involvement in the reconstruction and the governmental, legal and financial framework.

The programme organisation Reconstruction Windward Islands has been established under the responsibility of the Minister of Home Affairs and Kingdom Relations, and is headed by Project Director-General Hans Leijtens. Consultation and decision-taking regarding the reconstruction will take place in the Kingdom Council of Ministers where necessary.

According to Plasterk, the effective cooperation by the Netherlands to facilitate the “urgent and speedy” reconstruction of the three islands, “also in the phase after the emergency relief,” demands a “hefty input” of the Dutch Government and the coordination of such.

In his letter, the Minister also elaborated on the large-scale emergency relief currently provided by the Netherlands. The price tag of this massive aid is unknown at this stage. The first emergency relief consisted of the delivering and distribution of relief supplies, food, water, and also materials of the Red Cross, the Urban Search and Rescue Team (USAR NL) and emergency workers.

A 40-memmber USAR NL team is working on the island, drafting a priority list together with the United Nations Disaster Assessment and Coordination (UNDAC) team and the local government. Defence provided assistance to carry out evacuations. So far, more than 4,000 people were evacuated, of whom more than 1,600 by Dutch Defence. The Netherlands keeps assisting with medical emergency flights.

Defence keeps transporting food, water and (medical) supplies from Curaçao to St. Maarten using four aircraft. The Ministry of Home Affairs and Kingdom Relations BZK has chartered a ship that transports relief goods to St. Maarten from Curaçao. The governments and the people of Curaçao, Aruba and Bonaire are greatly contributing to these transports.

There are currently about 550 Dutch troops in St. Maarten. They support the local authorities with the maintenance of law and order, ensuring public safety, but also to facilitate the distribution of water and food. The military also help with cleaning and reconstruction work.

The Dutch national Police is assisting the St. Maarten Police Force KPSM with 49 officers, together with members of the Aruba and Curaçao police force and the Royal Dutch Marechaussee. After the initial “severe disruption of public order and safety” after the passage of Hurricane Irma, the harsh actions by police and the military against looters have yielded results, and the safety situation has improved, stated Plasterk.

There is a zero-tolerance policy in effect, and looters who are arrested are all locked up and appear before the Court shortly after their arrest. Community service punishments have been imposed and these persons are now working on the public roads, under the surveillance of rehabilitation officers.

The detention capacity is a point of attention, but it has been agreed with the Public Prosecutor’s Office that additional capacity will be realised, if necessary.

Plasterk closed off his letter to Parliament with a chronological order of the visit of King Willem-Alexander and himself to Curaçao and the Windward Islands from September 10-12.