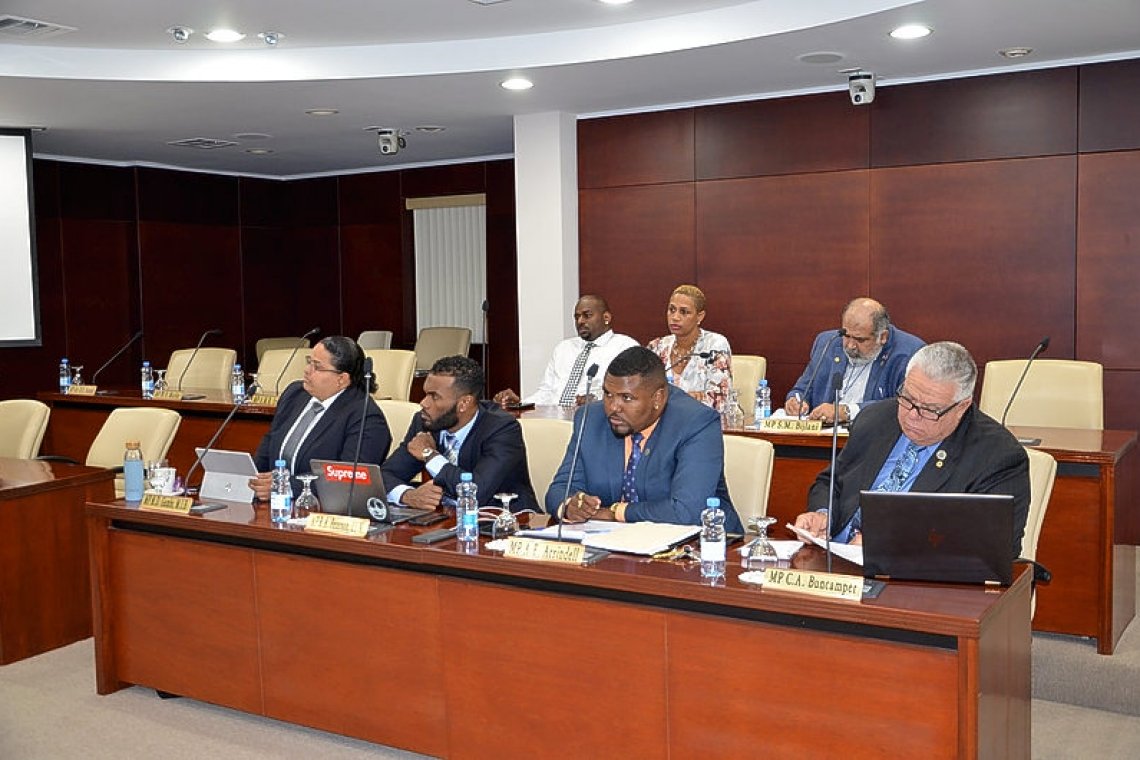 MPs listening to a presentation by MP Sarah Wescot-Williams.

PHILIPSBURG–A ban on single-use plastic bags, plastic straws and Styrofoam is one step closer to becoming a reality, as the initiative ordinance amending the General Police Law in connection with the introduction of a ban on the use of plastic bags passed through Parliament’s Central Committee on Thursday. It will be heard next in a public session of Parliament, where Members of Parliament (MPs) could vote to pass the piece of legislation.

The Central Committee meeting on Thursday was a continuation of the meeting on December 5, 2019.

Despite initiative taker MP Sarah Wescot-Williams of United Democrats (UD) presenting the draft law at the last meeting, she introduced it again on Thursday because of the new composition of Parliament. This allowed for the six new MPs to hear the initiative ordinance being presented.

After the presentation, Wescot-Williams answered the questions posed by MPs in December 2019.

Former MP Anna Richardson of National Alliance (NA) had asked whether the police would be the entity enforcing the ban and whether this was a feasible option.

“The emphasis is on control by the police. However, we have seen where different matters of control, [such as – Ed.] inspections, etcetera, have been delegated to different teams of inspectors, including the inspectors of TEATT [Ministry of Tourism, Economic Affairs, Transport and Telecommunication] and I don’t see it being any different in this case,” said Wescot-Williams.

Former MP Wycliffe Smith of St. Maarten Christian Party (SMCP) questioned at what point the draft law would become enforceable and whether it would target individuals “who got a bag of mangoes from their neighbour.” MP Rodolphe Samuel of NA wanted an education and awareness campaign added to the draft law and said the law’s success would be held by “a big stick.”

The idea of the law is not to come with “a big stick,” said Wescott-Williams in responding to both Smith’s and Samuel’s queries. She said she totally agreed with an emphasis on education and awareness.

“If we cannot get persons to understand that a ban on plastic is for a particular purpose, then most persons will seek to find a shortcut because they don’t sufficiently buy-in to the argument of the effects of plastic [on the environment] … It is also to start somewhere with awareness, but with persons in the back of their mind knowing that there are consequences that have been legislated,” she said.

Smith had also asked why the draft law carried exemptions for plastic bags given by pharmacies. Wescot-Williams said it is something that is in place in various countries. “The focus for that exemption is based on the possible contamination of medication … it is, to me, a reasonable argument,” she said.

MP Sidharth “Cookie” Bijlani of United People’s (UP) party had questioned about the proportion of plastic litter versus other materials. He had also asked whether a ban on a type of plastic would encourage use of other harmful materials.

To these questions, Wescot-Williams emphasised monitoring and evaluating the effects of the law to determine if it is meeting its objective(s). She also said research had been conducted into the proportion of plastic litter in the environment, which would be provided to Parliament.

After answering previous questions, current MPs were given the opportunity to pose new questions to Wescot-Williams.

MPs Claudius Buncamper and Akeem Arrindell of United St. Maarten Party (US Party), Melissa Gumbs and Rhaeyhon Peterson of Party for Progress (PFP), and Grisha Heyliger-Marten and Brison of UP party commended and offered their support to the draft law. No NA MPs attended the meeting on Thursday.

Gumbs asked if the French side was engaged in discussions about the draft law and whether visitor waste was considered as in Aruba’s implementation of a similar law.

Wescot-Williams said official discussions with the French side regarding the draft law had not taken place. However, she said there had been other discussions regarding waste processing in general. She said Aruba could be approached about how they have dealt with visitor waste.

Wescot-Williams also said she would be willing to consider formulating a maximum fine or a graduated fine based on how many times an individual has violated the plastic ban. Regarding an exemption for airport and port concessionaires, she said the type of plastic bags to be banned can be specifically defined in the draft law.

The meeting was then closed by the Parliament Chairperson. A report is to be drafted by the Central Committee’s Secretariat and Wescot-Williams is allowed to make amendments to the legislation.

The next step in the process will be a public session of Parliament, when MPs can vote to pass the draft law.