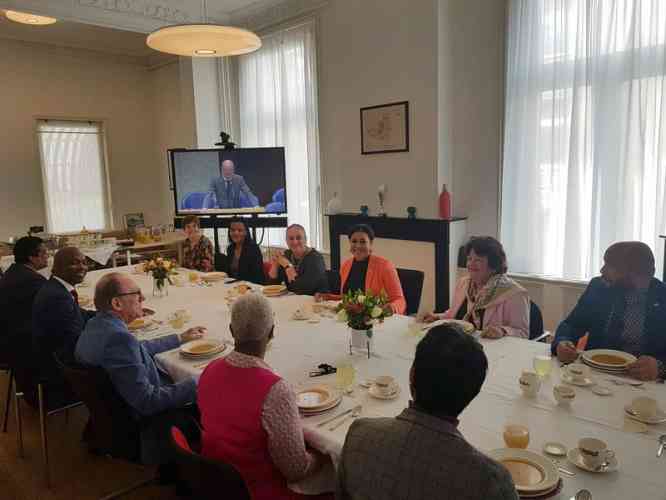 PHILIPSBURG–Minister Plenipotentiary Jorien Wuite, Deputy Minister Michael Somersall and their staff celebrated the ninth anniversary of St. Maarten obtaining its constitutional status as country within the Dutch Kingdom of the Netherlands on October 10.

The St. Maarten flag was hoisted for the first time on the newly acquired flagpoles at the Cabinet at Prinsessegracht # 7 in The Hague. The flags will remain hoisted 24 hours a day, as they are permanently lit.

During the event, Voges highlighted the challenges faced when the Cabinet first started. At the time it comprised two persons, but the team has grown over the years to eight staff members supporting and carrying out duties under the leadership of the Minister and Deputy Minister Plenipotentiary.

Wuite said the Cabinet reflected on the progress and challenges of country status against the backdrop of developments in St. Maarten and the handling of the 2020 Kingdom Relations budget debate in the Second Chamber of the Dutch Parliament.

“Many members of parliament made use of the metaphor of the family to give context and define the relations with the islands. While I consider some family definitions and reflections more fitting and attractive than others, we observe that after almost 10 years, a call for evaluation and adaptation of the Statute echoes within the chambers,” Wuite said.

“I believe firmly in our country and recognise that joint approaches and collaboration are of paramount importance. As we reflect on our progress and trials and tribulations as a democratic society, I am of the opinion that our norms, values and principles, as the basis of our parliamentary democracy, require reflection and renewal.

“The only way is forward and this small, yet committed cabinet is also in a supportive position to represent St. Maarten in The Hague, the Netherlands and Europe.

“I am sure more can be done in the years ahead if we heal together from the impacts of Irma and are able to transform from tendencies with inward fights to journeys where we together can tackle big issues such as our climate risks, regional social-economic collaborations, innovations and good governance within a desired constitutional arrangement.”

Somersall: “The 10th of October 2010 will always be very important and a historical day for all of us. It is the reason why we have a St. Maarten House and we are gathered here today.

“Dr. Martin Luther King Jr. said, “Faith is taking the first step even when you don’t see the whole staircase.” I am sure that many people were fearful and said we weren’t ready for 10/10/10. I am also sure that there were many who had faith that said that we were ready for 10/10/10.

“It is not important for me to say who was right or wrong. I for one am happy that as a country we took that leap of faith and gave it a try. Some people don’t realize that the country is only nine years old and we have a long way to go. We will, however, keep on building up the place we are all proud of to call our home. So, let us lift our eyes beyond our challenges of today, to the hopes of tomorrow.”