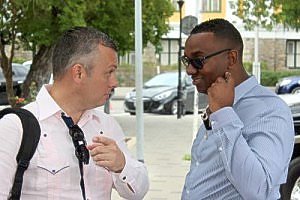 WILLEMSTAD–During a press conference called by Curaçao opposition party MAN, Member of Parliament (MP) Yaël Plet gave his version to the media on the latest developments regarding his attempted bribery complaint filed in February and the recent raids at the homes of MFK-leader Gerrit Schotte and PAS-leader Charles Cooper, who has joined up with MFK for the early April 28 elections.

Plet stated that he did file a complaint at the National Investigation relating to an attempt to bribe him. He also said he is pretty upset with the way things ended up in the media, as everything was supposedly taken out of context.

“In the first place I did not flee to another country after the house searches took place on April 5,” said Plet in reference to his trip to Miami. He bought the ticket on March 23 with the travel date of April 6.

On April 5, Plet received a call at 4:30am. It was the businessman Gilbert Ricardo asking to meet before Plet’s departure. Plet said to Ricardo that this was not a problem and agreed to see him at the airport.

During that encounter Ricardo presented a letter in which Plet declares that the businessman was not involved in the attempt to bribe the elected representative and that Plet was never approached by Ricardo with such a request. The reason for this letter was said to be for Ricardo to take it to the bank.

Based on that, Plet signed the letter. According to him all this was done in the name of their friendship.

Seeing everything being said in the media while he was abroad, Plet decided to contact his party to seek the services of a lawyer. That’s when Achim Henriquez came into the picture. Plet emphasised that he is the one who requested the services of a lawyer, not the other way around as was published by some news outlets and on social media.

The legislator added that based on his oath taken before the Governor of Curaçao he will denounce all attempts to bribe him or any other politician. He cannot accept corruption or any other illegal activity.

Plet will not be providing any more details while the investigation is still underway.