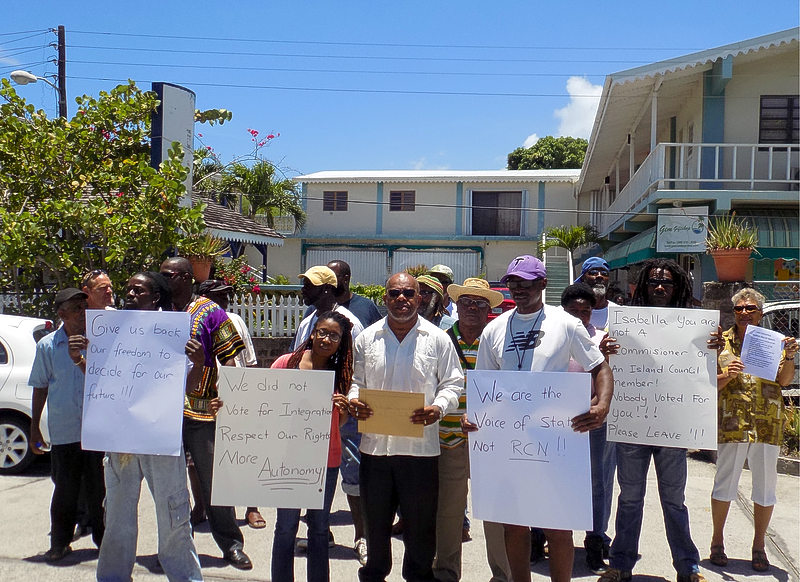 Headed by PLP party leader and leader of the coalition with United People’s Coalition (UPC) Clyde van Putten the delegation spoke with Dutch Government Representative Gilbert Isabella and handed him a letter to Minister of Home Affairs and Kingdom Relations Ronald Plasterk concerning the evaluation of St. Eustatius’ status as a public entity of the Netherlands.
PLP Island Councilmember Rechelline Leerdam and party board member Brenda van Putten, as well as UPC Island Councilman Reuben Merkman were among the protesters.
The protest letter, which was signed by Van Putten, Leerdam and Merkman, slams the Dutch government’s position on the evaluation report, as it “does not acknowledge and/or adequately address the most significant findings and recommendations of the evaluation report by the Spies Committee.” 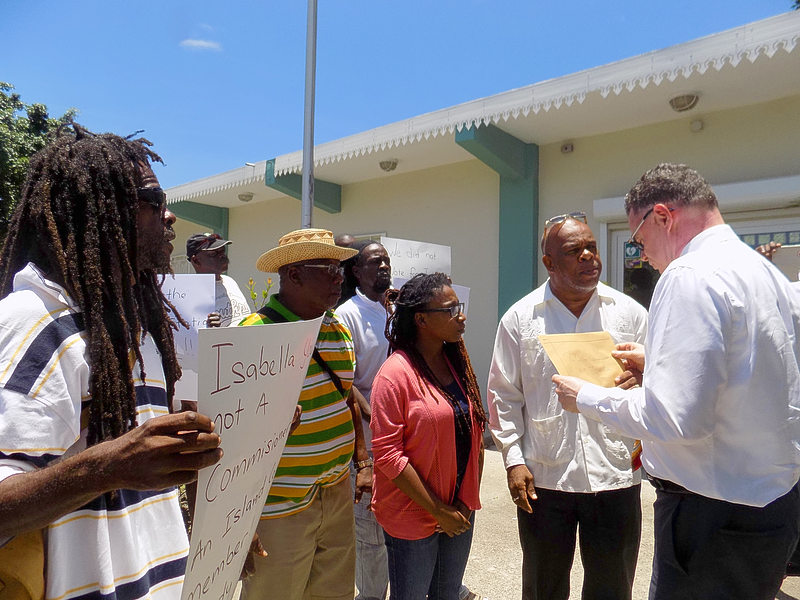 The protesters also find the response inaccurate in its description of the underlying factual situation on Statia. They are very upset about the “condescending tone towards Statia, the two other islands concerned and their people.”
Van Putten, Leerdam and Merkman claim the Dutch Government is ignoring promises made to the people of the islands in the past and that it “refuses to acknowledge the impact the misguided and failed Dutch policies and handling of the transition of the islands to the public entities continue to have on the present situation.”
The Dutch Government underscores the findings in the report that Statia lacks administrative power, but the PLP/UPC coalition said it omits that it has frustrated legally elected and appointed local representatives “by undue interference,” such as the imposition of higher supervision, the denial of appointments in crucial positions and the “systematic undermining of the authority of the Island Government by a Kingdom representative who attempts to replace the Executive Council.
The Dutch Government seems to suggest that Statia and its people cannot do anything for themselves and have no idea what to do, according to the PLP/UPC coalition, but “contrary to that “misconception,” the coalition said it has “well-documented” plans to stimulate the economy by increasing agricultural activities, provide incentives to people who want to start their own enterprise, stimulate reintegration of the unemployed and strengthening the social cohesion by providing support for single parents and young families.
The two parties are holding the Dutch Government responsible for destroying Statia’s economy by shutting down the Medical School, by-passing the island in signing an MOU with NuStar Terminals, “obstructing and sabotaging” the implementation of a revised Harbour Ordinance and in turning a blind eye on the lack of affordable airlift to and from the island.
The coalition is resolved in seeking international intervention and assistance in having Statia relisted as a non-self-governing territory by the United Nations and “to have the Dutch Government’s misguided, legally faulty and inadequate decolonization practices (re-)assessed,” it was stated.
The letter, protester chants and placards all voiced protest against Statia’s integration into the Netherlands, which they feel is going too far. Some protesters clapped and chanted: “We want our country back.”
Various signs showed the reasons behind the protest. “Give us back our freedom to decide our future;” “We did not vote for integration;” “Respect our rights. More autonomy;” and “We are the voice of Statia,” were among the slogans.
Government Representative Isabella was addressed personally. “Isabella, you are not a Commissioner or an island Council Member. Nobody voted for you. Please, leave,” it was stated.
Personnel and staff at the RCN building seemed to be weary of the protest. The sign at the door was changed from “open” to “closed” in an effort to prevent people from walking in.
As the group waited outside, Van Putten walked in and demanded to see Isabella. Isabella came to the front office to see the Councilman. Both of them came outside, where Van Putten presented a letter to the Government Representative.
Isabella spoke with the protesters and responded to questions with one and the same answer. “We have to work together. We cannot do it alone,” he said.
The Chief of Police, officers and a member of the Royal Dutch Marechaussee were on the scene but had no cause to interfere as the protest remained very peaceful.