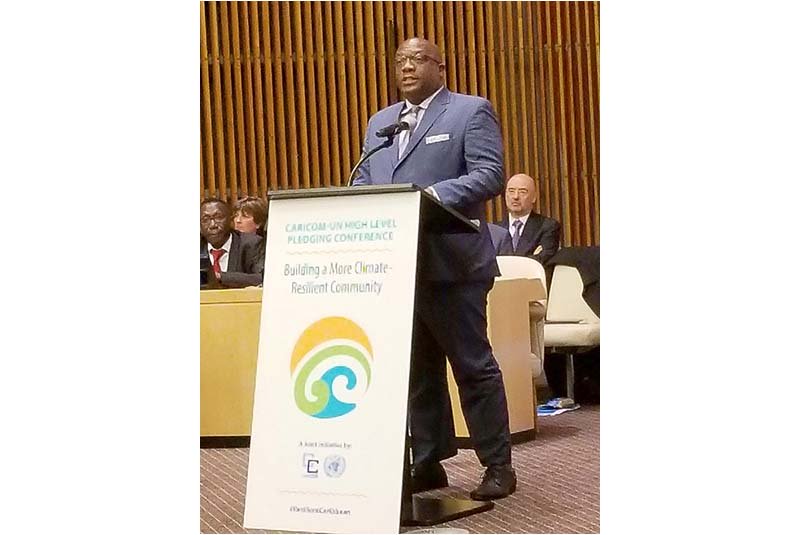 The Pledging Conference was organised with the support of the United Nations Development Programme (UNDP) under the theme “Building a More Climate Resilient Community.”

The Pledging Conference aimed to mobilise assistance for hurricane-devastated Caribbean countries from international development partners, allied countries, private sector entities, foundations and the like, so that they could rebuild as the first climate-resilient countries in the world. It also aimed to help the wider Caricom region improve its resilience.

Prime Minister Harris and Commissioner Mimica discussed, among other matters, cooperation on post-Hurricanes Irma and Maria recovery and reconstruction efforts, as well as geothermal energy development.

Commissioner Mimica and Caribbean Development Bank (CDB) President Dr. Warren Smith announced on Monday, in New York, the formalisation of a grant contribution by the EU in the amount of 12 million euros to the Geothermal Risk Mitigation Programme for the Eastern Caribbean.

The project, which launched Monday, will facilitate the development of “up to 60 [megawatts – Ed.] MW of geothermal energy capacity in up to five countries – Dominica, Grenada, St. Kitts and Nevis, St. Lucia, and St. Vincent and the Grenadines,” according to a press release, which added: “The 12 million euros in grant funding will be used to provide investment grants at the exploration phase, as well as technical assistance to support capacity-building initiatives and studies that explore opportunities for, and the feasibility of, interconnection between islands to facilitate the export of electricity by geothermal energy producers.”

Commissioner Mimica said on Monday, “The EU grant contribution of 12 million euros will serve to jump-start geothermal development through co-financing for higher-risk investments required at the early stage services of exploratory drilling, within a programme which could leverage additional financing of approximately 400 million euros.”

The 12 million euros in funding aims to decrease the countries’ dependency on energy imports, thereby reducing their fuel import bills and electricity costs. Countries in the Caribbean are saddled with some of the world’s highest per capita energy costs. The region’s annual fuel import bill is put around US $9 billion per year.

The EU’s contribution is being allocated from its five-year-old Caribbean Investment Facility (CIF), which supports investments located in the 15 Caribbean countries that have signed up to the African, Caribbean and Pacific Groups of States (ACP)-EU Partnership Agreement. This agreement is known as the Cotonou agreement because it was signed in Cotonou, the largest city in the West African country of Benin, on June 23, 2000.

Described as the most comprehensive partnership agreement between developing countries and the EU, the Cotonou agreement provides the framework for the EU’s cooperation with close to 80 countries from Africa, the Caribbean and the Pacific on key matters such as climate change and food security.

The Cotonou agreement established a comprehensive partnership in the areas of development cooperation, political cooperation and economic and trade cooperation. It entered into force on April 1, 2003, and is set to expire on February 29, 2020.

Commissioner Mimica’s responsibilities also include launching negotiations on a revised Cotonou agreement with the ACP. The agreement envisages the opening of negotiations on the “post-Cotonou” partnership by September 1, 2018, at the latest. St. Kitts and Nevis will participate in these post-Cotonou discussions with the EU.