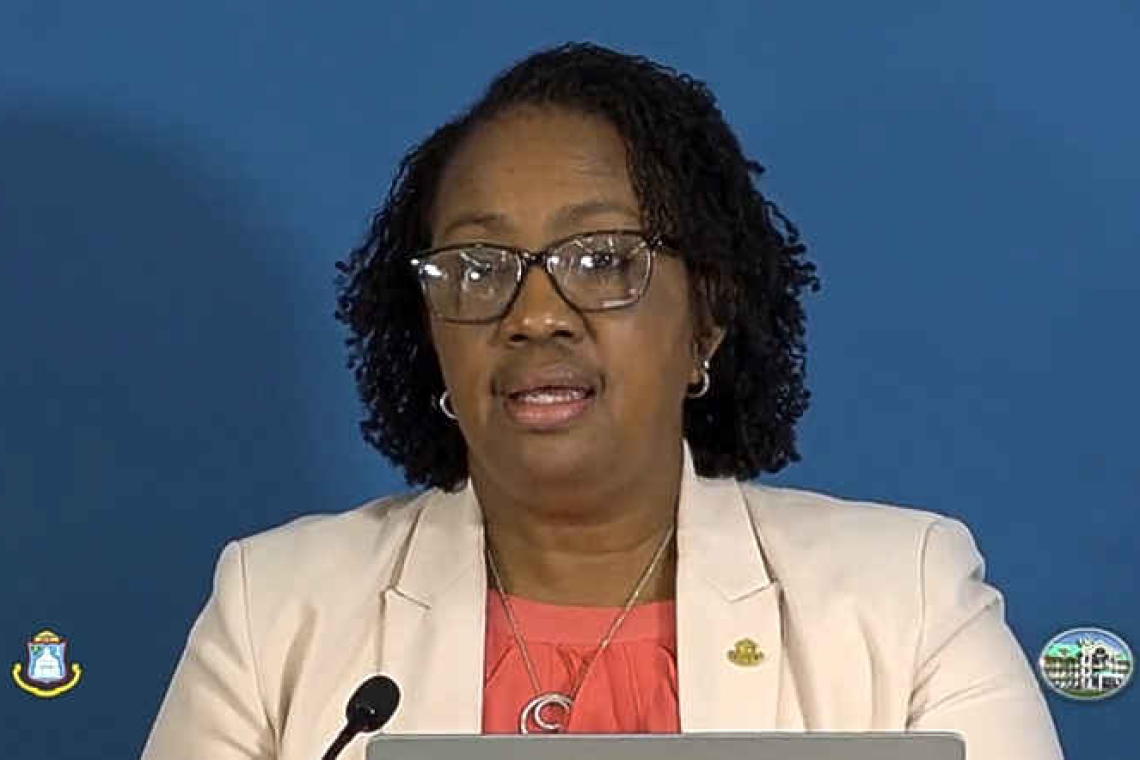 PHILIPSBURG–The cost-cutting measures imposed by the Dutch government as conditions for COVID-19 liquidity loans, including the 12.5% cuts, cannot remain on the table at the same time that an apology for slavery past is being given.

Prime Minister Silveria Jacobs made this clear during the live Council of Ministers press briefing on Wednesday.

The Dutch government will delegate seven ministers and state secretaries to the six Dutch Caribbean islands and to Suriname on December 19, to simultaneously pronounce formal apologies for the slavery past in the former Dutch colonies.

State Secretary for Kingdom Relations and Digitisation Alexandra van Huffelen was told that the 12.5% and other cost-cutting measures cannot remain on the table at the same time that an apology is being granted. “So, I am looking forward to that also being addressed prior to any statements being made as that will form part and parcel of our opinion on what this apology or statement from the Dutch government in this regard, will mean. Because yes, it is good to apologise for the wrong, but that apology must come with more,” the prime minister noted.

Jacobs said St. Maarten will not be placed on the spot to accept or reject the apology after it has been given, as the country would first have to analyse it.

The government of St. Maarten has been notified about the December 19 statements. A discussion was held in the Netherlands on Thursday, in which St. Maarten Plenipotentiary Minister Rene Violenus participated. St. Maarten also participated in discussions on the topic two weeks ago in Curaçao.

“So, there is an effort and we can commend the effort to have discussions with St. Maarten, but we have reiterated in writing to [the Ministry of Home Affairs and Kingdom Relations – Ed.] BZK and the government of the Netherlands that we were not involved in the beginning of this discussion with the dialogue group officially as St. Maarten,” Jacobs said, adding that government is in the process of setting up an advisory committee, which will be specifically for slavery, atonement and reparations.

She alluded to the 10-point action plan that the Caribbean Community CARICOM has established for this purpose, which will form the basis of the discussions moving forward. “A representative of the [Dutch] government will be sent to St. Maarten. I got further information from the state secretary on this as well as several other Dutch politicians. I have also sought discussions with Members of Parliament [in the Netherlands] – those that support and do not support the government – to hear their stance as well; and everyone who is part of the government seems intent that this is but the beginning of what has to take place and that is something that was set forth by us as St. Maarten already,” she noted.

“They are still requesting another response in writing, which we may be sending – there is a letter that is drafted from the Council of Ministers, which with my further input … will be going to them as well, with certain questions. Though some of those questions were answered to me verbally, we believe that a response to our first letter as well as to this one is needed before we can be clear as to what would be happening on the 19th.

“… It is definitely not the intention that a representative of the government is here translating the statements made by the prime minister, which will be made in the Netherlands and that we then jump up and make a statement as well. As a country, we are in the process of establishing a committee. First of all, this committee will then meet with stakeholders etc. I would definitely want to invite them to hear what the representative of the Dutch government will have to say in their statements and thereafter St. Maarten as well as all of the other countries involved should be given the opportunity to assess the content of said statement/apology, to determine the value of it in terms of the sincerity of it and if it addresses the points that we see as important, after which we will then make a response based on their discussions.”

Jacobs believes that discussions must be had throughout the community and Parliament before St. Maarten can unequivocally respond. “An empty [statement] or just coming forth and saying, ‘Okay I acknowledge that the human, the atrocity of slavery is a crime against humanity,’ check; ‘I apologise,’ check; ‘Here is 250 million,’ check, and we are done – that definitely cannot be the case and I have been reassured that that will not be the case, but I must say as a country, we must wait to see and hear what the content of said statement and or apology will be, and be given the room and space to properly analyse such before an answer can be given – any type of answer would be given. So, it will not be the intention of St. Maarten to, on the spot, be accepting or denying the apology. So, I hope that that makes it clear in terms of St. Maarten.”

St. Maarten still needs more information. “There are several questions that we still will have, which will be sent in writing to the government of the Netherlands to respond in writing and I am also encouraged by – even though I haven’t read the details of it – the press statement that I saw today, that the King is also doing an investigation as to the monarch’s involvement, so to speak, because that question has also been asked – is the Prime Minister [Mark Rutte] intending to apologise despite having made statements to the contrary just last year? We know their stance on decolonisation as well, so it will be very interesting indeed, because if we are to move forward with this Kingdom, a lot of information and awareness need to be brought to the people of St. Maarten, to the people of the Kingdom in general, and then the dialogue has to start as to what this apology means for the countries, because an apology in and of itself would not be deemed worthy of what has taken place and what we are still dealing with today,” stated Jacobs.