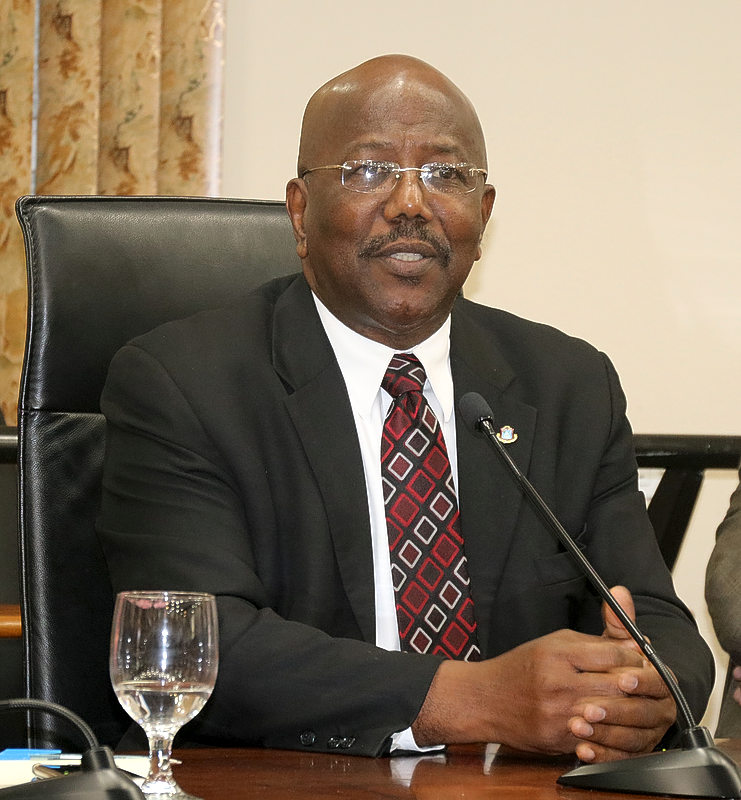 PHILIPSBURG–Prime Minister William Marlin met on Wednesday with detectives looking into the threats made again him last weekend by social activist Rene “Coto” Wilson, who threatened to murder him along with coalition members, friends and family members.

Marlin announced that he had met with the detectives on their request at his office.

He further stated that he saw no need for him to make an official complaint for detectives to start investigating the threat.

“I do not understand why Coto made the threat in the first place. His supposed premise was that I will postpone elections. This is absolutely false.

“This Government appointed a committee to look at the phenomenon of ship-jumping and suggest changes to the constitution before elections in September. The only time we wanted to change the election date was the February 9 date proposed by the previous Government. This Government plans to go ahead with the September elections and nothing will change that.

“A few years ago Coto was in my house with a friend and told his friend how humble and approachable William Marlin is. He also told his friend that I do not live in a gated community on top of a hill away from the people. My wife offered him and his friend something to eat and they ate at my house. Now he is inciting people to murder the Prime Minister and his family,” said Marlin during the live press briefing on Wednesday.

Wilson’s recent post on Facebook, which appears to have been removed since, stated, “PM just send for legal affairs to make an advice to stop the elections in September! I am asking this corrupted PM and his corrupted seven if they really think, we the people of St. Maarten is going to take it this way?

“Andre Bosman if Holland don’t want to witness the murder of corrupted politicians and their friends and families! You all better put a stop to that corrupted governor, we have in there!! Wake to hell up St. Maarten people. This man has done nothing in the case of ship jumping and he don’t know s*** with what he is doing!! Mind you Andre Bosman don’t forget the 30th of May 1969 in an island that don’t have the guns that St. Maarteners have!”

“How can a member of the Second Chamber go along with these hateful comments? Are they condoning the murder of the Prime Minister of St. Maarten and his family members?” said Marlin. He added that years ago if someone told him they would assassinate a prominent politician in Curaçao he would not believe it, but times have changed and one cannot take any chances.

Prosecutor’s Office spokesman Gino Bernadina said in an invited comment that persons who are threatened publicly should file an official complaint with the police.

“A threat is a type of violation of the law for which the person who feels he or she is being threatened has to file a complaint before an investigation can begin. This is called an ‘aanklachtsdelict’ (complaint). For example, I threaten you and you laugh about it and walk away, but Jane threatens you and you feel threatened and file a complaint. It’s that complaint that establishes the fact that someone is being/feels threatened based upon which an investigation can begin,” Bernadina said.

Bernadina was asked on what basis the Prosecutor begins an investigation if someone is murdered. Does it mean that a family member has to come and make an official complaint? In response he said that in case of a murder, based on the example used, the Prosecutor’s Office can ascertain that the person is dead and does not need a family member, for example, to file a complaint first, but can start an investigation right away to find out whether a crime is involved.

Marlin will propose changes to the present law to Parliament and make it decide whether a person holding the highest office should file an official complaint.

In the meantime, Marlin told the press the investigation has started and police are expected to invite Wilson to come in and give his side of the threat he made.