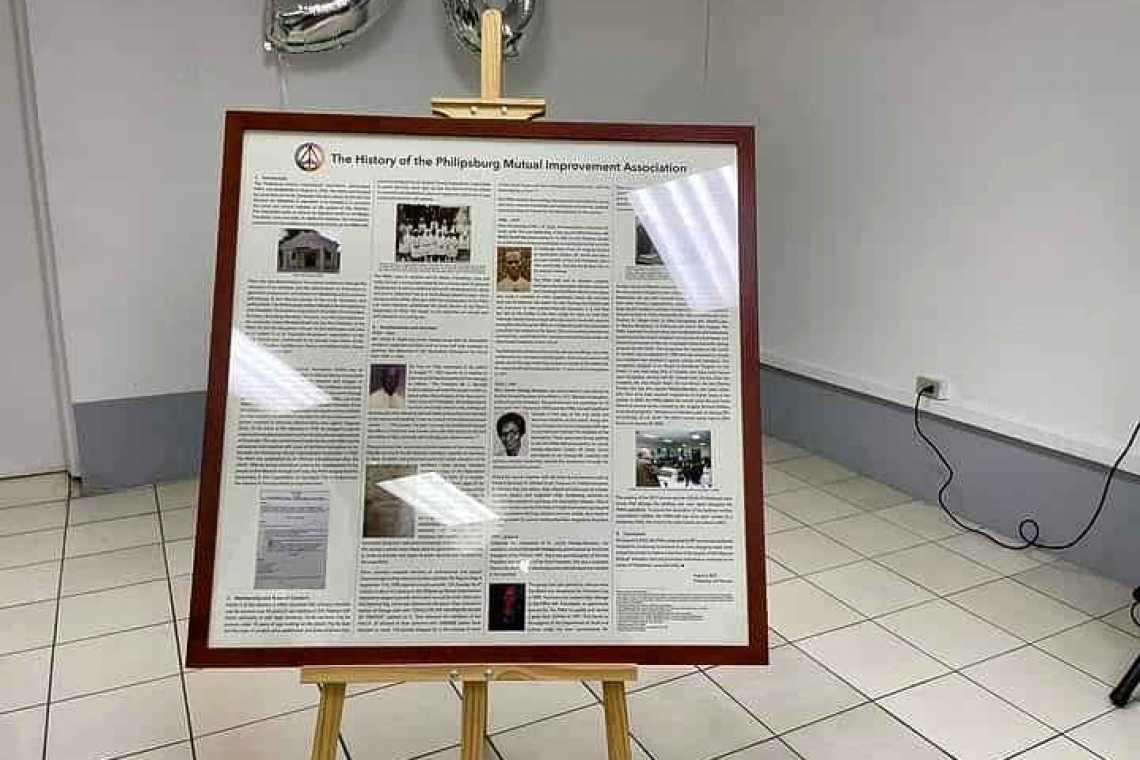 This history board of the PMIA was unveiled and hung in the PMIA Hall during the anniversary celebration on Saturday evening.

PHILIPSBURG–The Philipsburg Mutual Improvement Association (PMIA) with its building on Back Street, the PMIA Hall, is one of those original St. Maarten organisations that has stood the test of time, says Governor Eugene Holiday.

He was at the time addressing attendees at the celebration of PMIA’s 90th anniversary celebration at the PMIA Hall on the evening of Saturday, August 6.
A history board of the PMIA was unveiled and hung in the PMIA Hall during the anniversary celebration. A new PMIA logo was also unveiled.
Holiday said PMIA’s 90th anniversary is a reminder that heritage can be preserved in the face of external pressures and amidst the challenges of an ever-changing environment.
“And for doing this I commend the past and current members and boards of the PMIA. A study of the membership of the PMIA will show that many persons have passed through the association. They or their children therefore have a story to tell about the association and their participation in its activities,” stated Holiday.
“The PMIA at 90 has deep roots and is as such a part of St. Maarten’s cultural heritage. And cultural heritage is the root that anchors and causes us to grow as a people. Today’s 90th anniversary celebration is therefore a call for us to place more emphasis on preserving our St. Maarten heritage. It is an encouragement for more of us to take up our responsibility to preserve, document, protect and pass on our cultural heritage,” he added.
Established in 1932, the PMIA was founded on the idea of promoting the social and cultural interests of the people of St. Maarten through self-reliance. This anchored on its motto of: Friendship, Love and Unity. In its ninety years the PMIA has sought to realise its mission by providing educational and other social programmes and by offering its facilities for use for social, cultural, commercial and government tasks. Holiday said the PMIA Hall has hosted dances, concerts, movies, weddings, and currently serves as one of the chambers for court sessions.
Holiday is the grandson of the PMIA co-founder and first President, L.B. Scott; the great nephew of the PMIA’s second President Alexis Arnell; the son of the PMIA’s third President Leonie Holiday-Marsham; and the brother of the PMIA’s fourth and current President Glenderlin Holiday.
“It should therefore come as no surprise when I tell you that as a boy, I spent many Sunday afternoons in this PMIA hall attending PMIA meetings. That under the guidance of another PMIA stalwart Mrs. Mildred Scott. At the time I must admit, I was not always happy about having to attend those meetings. I would have rather spent my Sunday afternoons on the baseball field,” Holiday said in jest.
“During those meetings, we were taught the principles of the PMIA, self-reliance, friendship, love, and unity. Special emphasis was placed on important values and skills such as, being punctual, on being respectful, on speaking clearly, on paying attention when others are speaking, on how to organize and conduct orderly meetings, and on public speaking to name a few important principles, values, and skills for the building of cohesive communities and a strong country. These lessons in civics played an important role in preparing us to be active and responsible citizens.”
Looking back, Holiday said he is thankful that his mother insisted that he attended those meetings along with his brothers. “For in the words of the African proverb we were given wings. When I listen to and read the nature of the public discourse or should I say discord, it is evident that these lessons and these wings are still relevant today. In this age of social media and electronic networking, the interpersonal and civic education programmes of the PMIA can play an important role in improving interpersonal interactions and fostering greater civility and cohesion in our society,” stated Holiday.
In 2003 Holiday developed the idea for the Annual Lionel Bernard Scott Memorial Lecture series and proposed that the PMIA host the Lecture as one of its programmes. To launch and set the tone for the Lecture Series, Holiday volunteered and delivered the first LB Scott Memorial lecture on the topic: Economic Self-Reliance and Sint Maarten’s Quest for Country Status. He said St. Maarten’s Economic self-reliance was a relevant issue when the PMIA was established 90 years ago, it was important during our quest for country status and remains critical today.
“The lecture series I believe fits nicely in the founders’ vision of holding town-hall meetings to discuss, inform and educate the population about social, economic, and constitutional issues which are important for our development. I trust that the PMIA will continue to offer these valuable educational lectures to our people.
“I say that because it is evident that education gives us wings and helps us grow as individuals and as a people. In addition to its educational role, PMIA fulfils a significant cultural heritage function. Today as we celebrate the 90th anniversary of PMIA, I believe that we can draw some important lessons from the longevity and resilience of this historic and true St. Maarten institution. We should ask ourselves how many of our original organisations and traditions that represent our St. Maarten roots still stand today,” he stated.
“In a recent conversation with some of my staff at the Cabinet of the Governor we were reminiscing about the people and buildings in Philipsburg, Bush Road and around the island and about our foods and customs. I was surprised at how much some of them remembered and at the same time concerned about how much no longer exists.”
Holiday commended and congratulated PMIA President Glenderlin Holiday, the other board members and the members of PMIA on achieving this significant milestone in the life of the association. “You have built on the works of those that went before you to maintain and preserve this original historic St. Maarten Institution. You have answered the call. You are continuing to bequeath our children with roots and wings. And I am sure that the founders of PMIA, past board members, and members who are no longer with us are smiling on this proceeding with pride,” stated Governor Holiday.