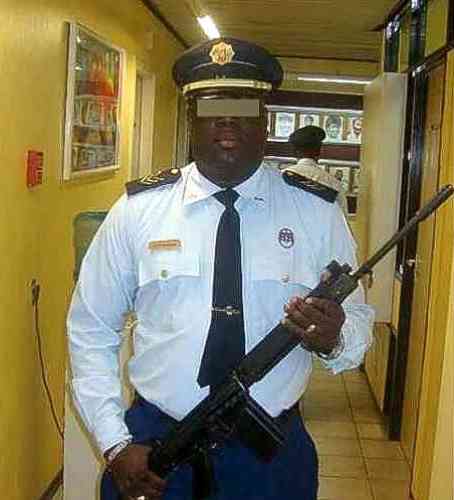 PHILIPSBURG–Policy advisor in Prime Minister Leona Romeo-Marlin’s office J.V.G. (43) is facing three years and a civil-service ban for his role in the so-called “Whale” case involving stolen or fenced diamonds, bribery, forgery and breach of confidentiality. He will not learn his fate until mid-December, it emerged Wednesday.

G. was arrested at his home in Cole Bay on July 3 in the investigation led by the National Detectives, with assistance from the Police Force of St. Maarten and Customs and overseen by the Prosecutor’s Office.

Two other suspects are a woman M.K. (32) and a man C.K. (59). They were arrested on July 6 and released days afterward, but remain suspects, according to the Prosecutor’s Office at the time.

The hearing in C.K.’s case was also scheduled for Wednesday, but was postponed until November 21, on attorney Shaira Bommel’s request.

The cases of G. and C.K. are closely intertwined. Both are suspected of involvement in the trade, theft or fencing of gemstones and diamonds allegedly belonging to Helena’s Jewellers, in the aftermath of Hurricane Irma.

Both are also suspected of bribery in which C.K. allegedly provided former police officer G. with airline tickets, monetary donations and other gifts in exchange for information about a criminal case against him pertaining to mistreatment of a person with the use of a Taser gun.

The Prosecutor’s Office is holding both suspects also responsible for forgery in antedating an official police report. G. is also charged with violation of his pledge of secrecy in providing C.K. with information from a current criminal investigation against him between January and March 15, 2018.

C.K. is also suspected of having committed lewd acts with his then six-year-old daughter and with two other minor girls, ages 12 to16 years. He will also be confronted with possession of 197 grams of cocaine and of 36 Molotov cocktails.

The information about the criminal investigation concerned these Molotov cocktails, which, the Prosecutor said Wednesday, were no longer there when detectives searched C.K.’s home.

G. categorically denied all charges. He claimed the diamonds, which he had received from a jeweller as a gift for his children, were false.

According to the Prosecutor, however, the sizes, weights and colours of the stones were indications that it concerned nine real diamonds. The person who filed the report with the National Detectives claimed the jewels had a value of US $2.5 million.

The Prosecutor considered G., who is a first-offender, guilty as charged. G. suffers from severe neurological complaints that made him unfit for work. He is suspended from the Police Force, but much to the Prosecutor’s surprise, government did not take any disciplinary measures against him.

The Prosecutor said the Whale case had been started after a “concerned citizen” filed a report with the National Detectives about “abuses and criminal acts.” He placed the bribery of a civil servant – committed within a timespan of more than three years – in the “atmosphere of nepotism.”

He also held it against the member of the police’s heavy crime division that he had leaked information pertaining to criminal investigations. “For a period of three years the suspect violated trust in law enforcement,” the Prosecutor said. However, the defendant “plays down everything,” he added.

Attorney-at-law Dagmar Daal pleaded not guilty on all charges. She said the case against her client was based on “guesses, opinions, assumptions and conclusions” by police investigators, not on facts, and said her client had made “honest and frank” statements.

G.’s pre-trial detention has been suspended since August 3. His lawyer called him unfit for detention and said the Prosecutor’s three-year demand was “unreasonable.”

The case hearing will resume November 11, during which G. will be given the opportunity to speak his final word.